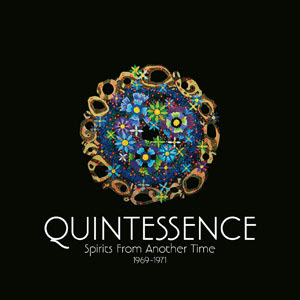 DOUBLE VISION AND WHO DREAMED
UP THE T.V. TITLE OGWT
Quintessence:
Spirits From Another Time 1969-1971 (Hux Records, May 2016)
This album is Hux Records’ 150th release and also their most ambitious project by far.
A Jewish flautist from Australia, jazz trained
in New York, arrived in west London’s Ladbroke Grove and placed an ad for
musicians in Melody Maker in March
1969. The result, a multi-cultural band added to Ron Raja Ram Rothfield:
vocalist Phil ‘Shiva’ Jones (Australian of British ancestry) from a hit band
Jimmy Page saw down under, Jeremy ‘Jake’ Milton (drums) born in England (to Canadian
parents) who grew up in West Africa, Richard ‘Shambhu’ Vaughan (bass) from
America, 16 year-old Allan Mostert (lead guitar) from Mauritius, and art
teacher Dave ‘Maha Dev’ Codling (rhythm guitar) from Leeds. Sixteen weeks later,
Chris Blackwell of Island Records visited their rehearsal in a basement of a Notting
Hill fish ‘n’ chip shop. At 2am he doubled Warners’ offer, with full artistic
control including album sleeves and unlimited studio time, to sign them.
In
August the cosmic surfers were recording their debut album issued in November
and touring Europe the next month. Their Euro film debut saw Montreux’s
programme enthuse: ‘One of the best bands in Europe. Individually they sparkle,
collectively they shine…When the year has ended Quintessence will be one of the
biggest bands in the world’. Heady stuff even for those days, and the music
fitted perfectly.

Quintessence (‘the fifth substance of the four elements latent in all
things’) didn’t need the BBC because their live reputation catapulted them
chart-ways before Progressive or New Age had even been coined. As Chris Welch
put it at the time, to a stunned public, the mighty Quins were better live than
the Doors. Band and listeners felt the albums were restrained compared to the
concerts, but this new release of studio tapes captures their energy that
resulted in a renowned symbiotic jamming style live. Verse, chorus, middle
eight, verse for three minutes—no way, this is propulsion, as adventurous as
any. As we hear, ‘We can’t use that start again, just let us blow!’ Jake
recalls that, although in the best of the time, the studios weren’t geared for
live recording: so rhythm tracks first then solos and vocals after, ‘never
quite the essence of the band’ he regrets. Pre-gig, matchsticks decided who
would write the set-list. Alan and Jake usually decided the opening mode or
scale and preferred an unnumbered set-list, ‘unlike one or two others’. Jake says
the freer style wasn’t a problem, as he and Ram came from jazz backgrounds that
shaped their approach along with listening to Indian music like Pannalal Ghosh,
Coltrane or a bit later the Grateful Dead (Dark Star was a big influence for
Jake and Alan) played in the tour wagon.
Mostert’s
range from spiralling acid (but always controlled) to bird-of-paradise-like solos,
Maha Dev’s pumping rhythm guitar sometimes as twin lead, the heavy bass
(remastering shows its power) allied to fluid drumming augmented with hand-percussion
and flute, highlights a leading band at their zenith. (Jim Morrison bought all
their albums on import.) Jazz and blues tropes, driving rock, psych, meditation,
pioneer electronica, drone, almost choir-like harmonies, audience participation
that was meaningful not moronic pap—and all that could be in one song! The idea
was to replicate a sound of mesmerising intoxication as identification (not
projection) with the audience who participated sometimes with their own
instruments. A celebration unifying mind and body that was spiritual and at
times celestial, as one reviewer noted. (Association with George Harrison’s
Radha Krishna Temple was a myth; like their Swami the band were ecumenical,
sharing variant paths; he also advised against drugs). This is bliss music as
it should be: vibrant soul-energy, essence, a thanksgiving free and
unadulterated.
Disc
one opens with their famous single, Notting Hill Gate—was it only export
picture-sleeve copies that started with the spliff lighting intro?—but in its
first-time full, unfaded-out state with a more tripped-out vocal and sitar by a
guest before the guitarist took it up himself. Island’s studio was in the heart
of where the band lived, London’s bohemian centre. A rehearsal nearby at All
Saints Church (site of Hawkwind’s first gig) featured in a counter-culture
documentary. No better statement of time, place and band: for this is a trip
not only in music but also time dimensions.

Brahman, which would be on their third album Dive Deep (March 1971 reaching number 43), is here a fourth take of
an often-worked song with a middle jazzy riff written by Shiva and different
guitar solo. One of the joys of this release is Allan Mostert’s extended solos
that were a live delight but rarely on recordings (we now see due to vinyl’s space
limitations). His acid- swirler building to a head-topping crescendo on Sea Of
Immortality (oddly absent from Island’s compilation Oceans Of Bliss in the 90s) is one of the greatest of the period
and here unabridged: this release features two more classic versions of the
‘celestial wine filling you with divinity’. Musical breadth also permeates two seven-minute
plus takes of Only Love (Can Save Us), first heard with added live material on
the second eponymous album which in June 1970 reached their highest charting of
22 during 4 weeks. This is another testament to their meteoric rise in spite of
never appearing on John Peel’s show and only one In Concert recording, in November 1970.
Many
of their best songs here include an even more epic (longer than on the third
LP) Epitaph For Tomorrow. Twin guitars are more to the fore, as is the bass, with
more fiery solo over a driving rhythm including a rare glimpse of Shiva’s
Hammond playing. His favourite track from the debut album (In Blissful Company 1969), Body, has here been wonderfully salvaged
from the March 1970 St. Pancras concert that featured on a previous Hux
release. Thumping bass, soaring flute and a cloud-bursting solo with wah-wah
ends because the tape ended, as the compere explains. Timeless time-travelling.
A
couple of unfinished snippets include a baroque harpsichord piece (for an
aborted opera, as was High On Mount Kailash) and Hari Om chant introed by Mostert’s improvisation. This chant briefly appeared faded on the fourth album Self (RCA in May 1972 with one side live
at Exeter University, reached 50 but oddly in the chart for just one week) but
here has multiple backward percussion melded with funk guitar. Also unreleased
on disc two is Tree Of Life by a four-piece and a rare vocal from Dave Codling,
reminding a little of Kala (Shiva’s and Dave’s post-Quins band) or Pearl And
Bird by Mostert on the debut platter. Self
reappears with Codling’s You Never Stay The Same (retitled Vishnu Narain on
that later fourth album and same take as a single b-side), this time with
vocals by the guitarist and backing (ashram?) singers. Colin Harper speculates
that Self on RCA has smuggled-out
Island tapes; the label has no multi-tracks of the LP in their archive but does
have a complete set for the follow-up Indweller
(RCA 1973). Cosmic Surfer b/w Wonders
Of The Universe actually exists as an Apple Corps Ltd green/white labelled
acetate, so perhaps George Harrison was approached by the band’s management?
The
second version of Only Love is a great find—an outtake possibly eclipsing the
classic album track!—with chugging second guitar, hypnotic vocal, Raja Ram’s
flute and bells and another high-inducing lead solo brilliantly underpinned by
the drummer. The 1970 album track was tape-spliced together by producer John
Barham, who worked with George Harrison, Ravi Shankar, Radha Krishna Temple and
most of the Apple roster including Lennon’s Imagine,
Kala, and films by Jodorowsky and Preminger. Marwa, later on his solo album Jugalbandi (Elektra 1973), is based on a
six-note Indian raga, but here uses harps, piano, cello, flute and tablas with
a dreamy vocal recalling Vedanta story songs.
A new
mix of Wonders Of The Universe later used the next year on Self appears, and Maha Mantra (90 seconds on the second LP) is here
in its full six-minute version with the band’s Swami-Ji (Swami Ambikananda
1934-97) and ashram singers who at one time featured Lene Lovich of later punk
fame. This evocative chant kirtan (on Youtube from a BBC schools documentary
film) shows the spontaneous and indeed joyous empathy. Also unreleased is
Sunlit Kitchens, featuring the band’s poet-lyricist and first manager Stanley
Barr reading over a mantra. Shiva requested this and Hari Om to be included:
his kindred album with Ralph ‘Rudra’ Beauvert, who runs the excellent band
website in Switzerland, is highly recommended (Eclectic Records, 2005).
Twilight Zones reappears from the second album, but instead of a meditative
mellower is here delivered as a Hendrix-style trio, fuzz bass and all! The
closer, Move Into The Light, was the never-played-live B-side to the Notting
Hill Gate more fuzz-laden single of January 1970, here reprised (in take 13)
with Simon Lanzon (later of Donovan’s band and Chumbawamba) guesting on keys
and new Shiva double vocal (baritone to falsetto perfectly pitched) added to
the voiceless surviving take with a percussion jamboree longer than the
track-time. Three tracks have added new parts by Shiva or Dave Codling. Shambhu,
who wrote Ganga Mai, sums up the experience: ‘Certainly our music has been an
education and joy to us, and if it can be a joy to other people then its
cool’.