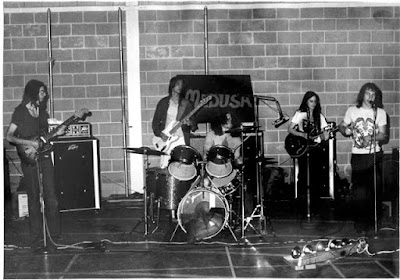 Rising from the Ashes
The Medusa Story
Lee Teuber-drums, Kim Gudaniec-bass and Gary Brown-lead guitar were getting ready to take on a new musical venture that would not get it’s start until 2013. The time was probably the end of June 1973 while rehearsing in my mom’s garage, when a guy appeared and stood at the back of the garage. His name was John and he introduced himself as a band manager and asked if we could use his services. And who wouldn’t want a manager to get gigs for the band? So we agreed. He also introduced us to Donna Fields who became our Rhythm guitarist. After we talked for a while he left and we got back to rehearsing. We chose Children of the Grave by Black Sabbath as our next song and about 13 secs into the song when it gets heavy, there was a loud crack of thunder and a bolt of lightning lit up the sky. We all stopped and looked at each other and had no idea what was about to happen some 40 years later.
We started writing songs, mostly instrumentals, as we did not have a singer at the time. Eventually, Peter Basaraba joined the band and Donna had named the band Medusa because of her love of mythology. Peter being a phenomenal artist, painted a banner and brought it to rehearsal and showed it to Donna who promptly said, “NO.” It consisted of a pentagram with a goats head and around the outside of the goats head were our astrological signs. We were not satan worshipers and Donna held firm to her opinion that the banner depicted satanic influence. None-the-less, 40 years later it became the cover of First Step Beyond, Medusa’s first and only album. For a bunch of kids in their early 20’s we were an amazing band. I learned a lot from Kim about Progressive music especially Italian, English and Krautrock bands, and they became huge influences on the way we wrote the music for First Step Beyond. Peter was an interesting writer, as he could be serious and spacey depending on the song. He was an amazing vocalist. Lee was like Medusa’s answer to Keith Moon and Kim had influences from John Entwistle and some early Chris Squire. Donna was more of a folky kind of guitar player and when she joined carved out a spot for herself and became an integral part of writing guitar parts of the songs with Gary.  She wrote lyrics and music for the song, Black Wizard.
Medusa was a killer band back then and it still grooves hard today! 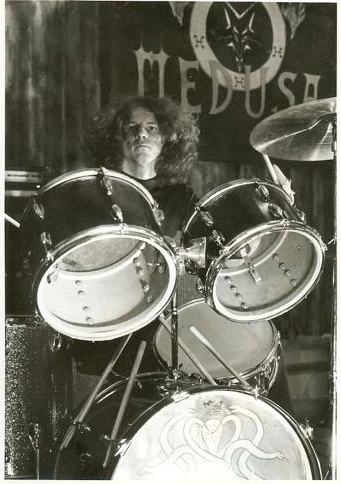 Back in the 70’s, venues weren’t into original material so to play we had to learn cover songs and eventually slip in an original here and there. The shows we played were frat parties, civic centers, high schools, etc. And yeah we played covers but they were Blue Oyster Cult, the Stones, Free, Muddy Waters, Kiss, Jethro Tull, Johnny Winter, Blue Cheer, Alice Cooper, you get the picture. We did play our first gig at a place in Chicago called the Post which was an original show. We opened for Gabriel Bondage, who also formed in 1973. They recorded their first album, Angel Dust, in 1975. Ironically, we also recorded our songs in 1975 but our album didn’t come out for a “few”  years down the road. 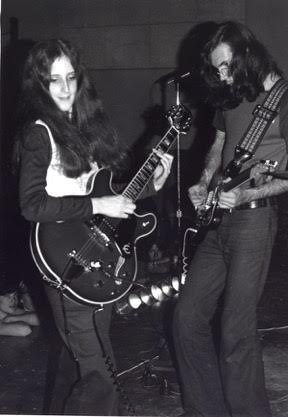 Both Lee and Kim owned 4 track reel to reel tape decks and we decided to start recording our original material. So we used Lee’s Dokodor reel to reel and each member got their own channel and we laid down all the material we had. We then, to not lose quality of the music, transferred the instrumental tracks to Kim’s tape machine and fed Pete’s vocals through a mixer and voila, we did it. We did go into a studio later and recorded some of our songs and 2 of them Strangulation and Temptress made it to a 45, our only release at the time. The rest of the session didn’t sound as good as the basement recordings but the 45 survived and there we were, a bunch of kids walking away with boxes of 45’s that eventually went to friends and ended up in the garbage as time passed on.
Fast forward some 40 years to February 1, 2012 when Donna got a phone call from Rob Sevier from Numero Group records in Chicago. “Hello, are you Donna Brown? You were in a band called Medusa back in the 70’s weren’t you?” As she was about ready to hang up on him, he stopped her and told her he found one of our 45’s at a record convention and thought the music was great. Donna of course had to ask who the hell would like that old shit today and Rob replied, “You’d be surprised!”  And as they talked the question finally came up, “You wouldn’t happen to have any more material would you?” Well we had no idea what ever happened to the tapes from back then. Luckily, Lee had all of the tapes at his house in Nederland CO, a very dry climate, which means the tapes did not get destroyed by humidity. We weren’t even sure the tapes would still play and were right, Lee’s Dokodor didn’t work. So, he found a you tube video on how to fix the problem and he fixed it. Next step was what’s on the tapes. Well he headed up to DVD memories and they transferred everything to cd and as we all listened the songs they sounded better and better. So we boxed up the tapes, signed the contract and sent everything back to Numero and they did the rest. 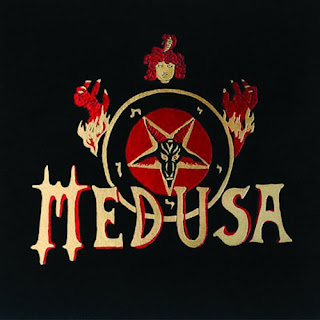 In February of 2013, First Step Beyond had made it’s way all around the world from Australia to Sweden, South America and Canada. The reviews were all over the internet and Mojo mag, Uncut, Terrorizer and Record Collector did reviews as well. Eventually we made it on to Mojo’s cd Heavy Nuggets III released in July 2014, which was the Zeppelin edition. We were amongst heavy hitters like Atomic Rooster, Bang, Pentagram, Freedom,etc. 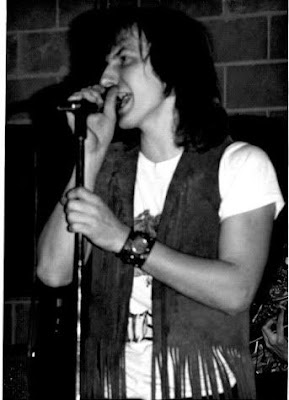 Discovering there was a buzz around the internet that the album was gaining recognition an accolades, Donna and I decided to put a band together and to relearn all the old material. By April of 2014 the new band was finally together with Dean McCall on Drums, Randy Bobzien on bass and vocals, Kam Wentworth on guitar, Gary Brown on Lead Guitar and Donna Fields- Brown on Hammond Organ. By June 2014 we played our first gig at the Toad Tavern in Littleton CO. As we carried on Donna started writing new material and gigging happened more and more until we were contacted by Zach Oakley from San Diego based band Joy, and we were invited to do a short tour with them. We played our first show of the tour in Denver on Feb 4, 2015, then it was off to Kansas City, MO, and St. Louis. At the St. Louis show Donna smashed her thumb in the car door before the show but she continued on and we played a great set in front of an appreciative crowd. We ended in our home town of Chicago at the Cobra Lounge Feb 7, and were reunited with Peter Basaraba. We were greeted with a great audience response at all of the venues and when we got to Chicago we tore the roof off of the Cobra. It was a great tour, and we learned a lot to prepare us for more touring. 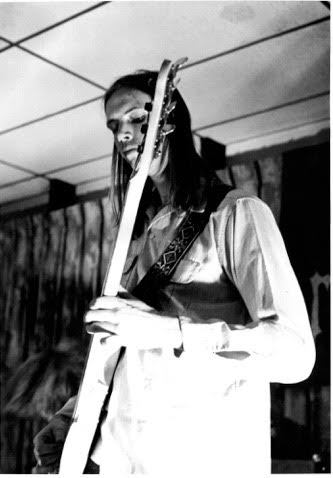 We did lose our other guitar player so we had to make some quick changes. We were scheduled to go into Colorado Sound studios to record our long awaited 2nd album, so we got Phoenix Johnson on Bass and moved Randy to 2nd guitar. By Feb 28 we were ready to start laying down basic tracks. After 2 and a half days in the studio we had to get Phoenix adjusted to the old material cause we were booked for 2 shows down in Austin, TX at the Lost Well in March for SXSW. Thursday night was our greatest show as people came from all over Texas and as far away as California, and we rocked the house. The place was packed!
Once back from Austin it was back to the recording studio for more work on the 2nd album. In July, we toured in California for 3 shows with Joy. A few months later, finishing with the studio work and mastering, it was time to shop for record labels. We sent packets out to several labels and got no response. One day we got an email out of the blue from Svart records in Finland informing us they might be interested in releasing our new music and we sent another packet to Finland. After about a week I looked up how long it would take to send it over seas, about 2 to 3 weeks. So I res’d down our songs and sent them email. They loved it. Okay cover, cover, don’t have a cover. Well months ago Randy had suggested Richard Luong from Texas and I liked his work. So I contacted him and we worked out the sizes and other details and we had an outside and inside gatefold cover all bought and paid for. Contacted a guy in Austin TX, Philip Reeder from mosasaur print & design house and bought a logo. When we did SXSW he did the poster and I loved the logo. So we were done, or so I thought. Maybe a week or so later Donna and I went to Boulder for lunch and as I stood in Mustards Last Stand to order the usual Polish Sausage and Fries, Jon Hopkins an employee, friend and supporter of the band said hey, I got this picture I need to show you from this artist Tommie Molecule. When I showed it to Donna, we were captivated and had to switch gears to change the previous artwork that we thought would be the front cover design to the Molecule masterpiece. 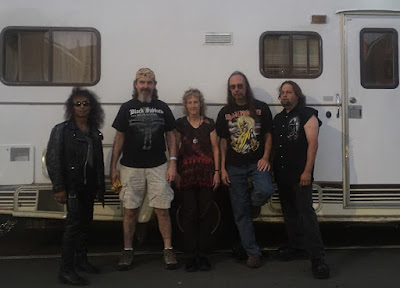 After dickering with Svart Records for the last 2 months and trying to work out details of what the cover, back cover and inside gatefold would look like, it has finally come to fruition. Now its a matter of working out contract details and hopefully our new album, Rising from the Ashes, by Medusa1975 will be released sometime in mid 2016.
FB fanpage
http://medusa1975.bandcamp.com/
Written by Gary Brown/2016
© Copyright http://psychedelicbaby.blogspot.com/2016
ArticlesMedusa