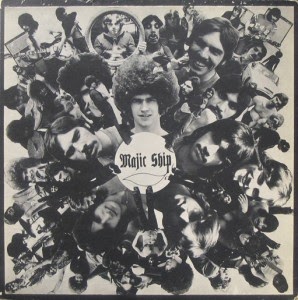 Majic Ship “Majic Ship” (Guerssen Records, (1969/2013)
Originally released on the Bel-Ami label in 1970,
“Majic Ship” is an album that gleaned lots more attention after its
birth. That’s all well and good, but such accolades would have duly benefited
the Brooklyn band on a larger scale while they were active. Because the disc
was pressed on a small imprint, distribution was limited, which of course
amounted to restricted exposure. Had a wider audience been able to hear
“Majic Ship,” the band definitely would not have sunk into obscurity
as they did. Some years ago, Gear Fab Records resurrected the album in digital
format on a couple of occasions, with one of the packages containing bonus
tracks. The disc being reviewed now, however, is available only on vinyl.
Surging full steam ahead with hard rocking psychedelic
sounds, “Majic Ship” is further enriched by firm musicianship and
competent songwriting. Comprised of lead singer Mike Garrigan, lead guitarist
Phil Polimeni, rhythm guitarist Tommy Nikosey, drummer Rob Buckman and bassist
and organist Gus Riozzi, the band boasted an impeccable rapport, and word has
it they were quite the live attraction as well.
Plastered with choppy riffage and coiling tempos, the
powered punch of “Nightmare” steps in as a great Who imitation, while
“Cosmo’s Theme” is a buzzing instrumental, “Sioux City
Blues” screeches and sizzles with determination to the hissing tone of
fuzz guitars, and the crackling electricity of “Life’s Lonely Road”
pulsates with penetrating acid rock grooves. A warm and relaxing feel charges
the meditative mindset of both “Where Are We Going,” and
“Wednesday Morning Dew,” “Too Much” slaves away to a solid
and steady beat, and a medley of Neil Young’s “Down By The River” and
Buffalo Springfield’s “For What It’s Worth” is marked by crisp and
crunchy jamming. Consumed by dashing hooks, raw energy and strutting vocals,
splashed with a spot of soul, “Majic Ship” is bound to produce
high-fives by fans of bands like Steppenwolf, Iron Butterfly, Nazz and Spirit.
Majic Ship’s existence came to a dreary end in 1971 when
their equipment was claimed by a fire. 1999 saw the Mike Garrigan and Tommy
Nikosey reunite, resulting in an album titled “Songwaves Project”
that also included Cher, ex- Rolling Stones guitarist Mick Taylor, Dave Amato
from REO Speedwagon, and drummer Ron Wikso, who has played with everyone from
Foreigner to David Lee Roth to Cher to Randy Meisner to Denny Laine. Although
the disc is poppier than “Majic Ship,” it’s still strongly
recommended and adds a nice touch to the band’s legacy.
Review made by Beverly Paterson/2013
© Copyright http://psychedelicbaby.blogspot.com/2013
Beverly PatersonMajic ShipReviews