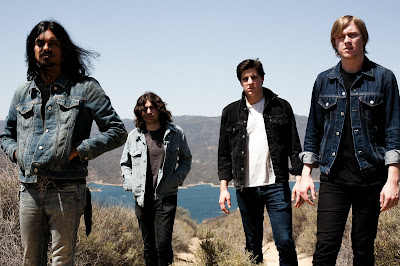 © Joshua Shultz
Cab 20 tenders a sound that might be well
tread territory in another band’s hands but they’ve dug deep and found
something wholly original.  Fusing
elements of garage, psychedelic and punk with a solid grounding in the blues,
their new album Holy Denim Faded Vibrations is an absolutely stunning statement
on the LA scene, inadvertent though it may be.
Their sound instantly conjuring images of Black Rebel Motorcycle Club
and Aha Shake era Kings of Leon, Cab 20 still seem to defy logical
explanation.  There’s only one real thing
I can be sure of, it’s rock and roll.
Their psych, and their definitely garage, but they have this raw punk attack
to their sound and come armed with enough feedback and distortion to deafen an
army!  It’s not often you hear
songwriting of this caliber in a band that’s so ball’s to the walls rock and
roll, a band that’s so unabashedly having fun with what they are doing.  If you are like me and have been in the dark
about Cab 20 until now, or just found yourself wondering who they were and
where they came, from fear not fearless reader all your questions will be
answered below!

What is the band’s lineup?  Is
this your original lineup?
The current lineup is Bert Hoover (Guitar/Vocals), Zack Cosby (Drums),
Jason Almanza (Bass) and Erik Lake (Guitar).
This isn’t the original line up.
This line up has been together since October 2012.
Where are you originally from?
Where is the band located now?
We’re from and currently located in El Segundo, California, right next
to the LAX airport.
How would you describe the local scene where you are located?
There’s no scene in El Segundo ha-ha but in other parts of LA you’ll
find all types of different music and little “scenes”.  I guess it’s cool.
How and when did you all meet?
I’ve known Zack since 5th grade but we didn’t start playing together
till 8th grade.  He was drumming when we
first started the band in high school but we sort of went our different ways
and he rejoined in October.  Erik runs
this amazing label, Mock Records, and we met back in 2011 but he didn’t join
until October of 2012.  We found Jason
through the internets back when our old bassist left for school back in 2011.
What led you to start Cab 20?
It just kind of happened.  I like
playing music with my friends so we started a band.
What does the name Cab 20 mean or refer to?
It’s quite a boring story but here’s the gist: I was in Austin Texas
with family and Austin City Limits was happening, so everything was a little
crazy.  We got in a cab on our way back
to the hotel when over the radio we heard “All cabs be weary of
pedestrians.  Even you Cab 20.” don’t
know what that means but we thought it sounded cool so we went with it; pretty
anti-climactic.
Are you very involved with the local scene there?  Has is played a large role in the history or
evolution of Cab 20?
We’re not really a part of scene nor do we really have the desire to be
a part of one.  Everyone is in sort of a
clique, like high school.  The scene in
LA hasn’t really affected us, except that it’s harder to book shows in certain
places.
I don’t like to label or classify music,
how would you describe Cab 20’s sound to our readers?
Rock and roll.
Your music seems like it’s bubbling with influences, familiar and
totally originally at the same time.  Can
you talk a little bit about who some of your personal musical influences
are?  What about the band as a whole?
We all listen to different things ranging from Kyuss to The Flying
Burrito Brothers.  My personal influences
recently have been Nick Cave and Johnny Cash.
I’ve always been a huge fan of Black Rebel Motorcycle Club and Queens of
the Stone Age.
Can you talk a little bit about Cab 20’s songwriting process?
Most of the time I’ll write a song and we will use it as a blue print
and work it out together as a band.
Sometimes things come out of a jam or someone has an idea.  It’s a sporadic process.
Do you enjoy recording?  Some
bands love it and other bands run screaming into the night ha-ha!
I love recording.  Songs take on a
different life in the studio.  It can be
stressful though.
You released Holy Denim Faded Vibrations in February, can you tell us a
little bit about that record?  Where was
it recorded?  Who recorded it?  What kind of equipment was used?
Holy Denim was recorded in a small grey somewhere off of Santa Monica
Blvd in Hollywood.  Krish Sharma produced
it.  We got to use all sorts of
equipment.  Weezer recorded a couple
albums there and they had a custom fuzz pedal lying around so we tried to use
that in a song.  It didn’t sound as good
as we we’re hoping hah.  Most of Holy
Denim consists of old songs we had that we wanted to put out before they were
forgotten about.
Who released it?
Mock Records, a great Indie label, genuinely, good hearted people.
What does the name Holy Denim Faded Vibrations mean or refer to?
It’s sort of making fun of the scenester kids that put looking cool and
being seen at a place before the actual music.
Those kinds of things frustrate me.
What about your first album Dirty Smiles?
Ha-ha that’s an old one.  Dirty
Smiles was the name of our old drummer’s dad’s old band, we actually almost
changed our name to Dirty Smiles.
Thankfully we were talked out of that. 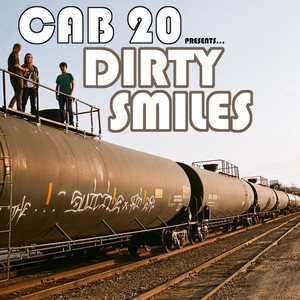 Can you talk a little bit about the recording of the Dirty Smiles album?
We recorded Dirty Smiles on a shitty boss electronic mixing board thing
in my garage when I was a junior in High School.  I wrote most of the songs when I was sixteen.  We had no idea what we we’re doing ha-ha.
How was recording Holy Denim Faded Vibrations different than Dirty
Smiles?  Was it easier the second time
around?
Holy Denim was recorded in a much more professional fashion.  Dirty Smiles was very “do it
yourself”.  It was easier working
with someone who knew what they were doing, but you learn a lot more when you
do it yourself. 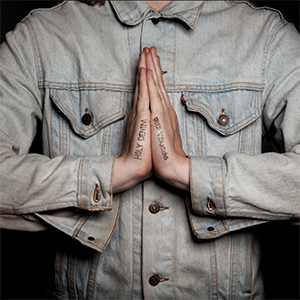 What other music has Cab 20 recorded?
We recorded an EP with Krish Sharma that we put out in the summer of
2011.  We’ve had songs in compilations
that you won’t be able to find on anything else.
Are there any releases planned for this year beyond Holy Denim Faded
Vibrations?
We recently recorded two songs for a 7″.  Not sure when that’s coming out.  We also are about to begin recording a new EP
that will hopefully be out in October.
It’s going to sound a little different.
Where’s the best place for our readers to purchase copies of your
albums?
Probably iTunes or Bandcamp for digital copies, for physical copies the
best place to look is our website (http://www.cab20music.com) or certain record
stores.
What do you have planned as far as touring goes this year?
We are going to be touring through the south and Midwest this July.  Dates are on our website.  We may be headed up north later this year. 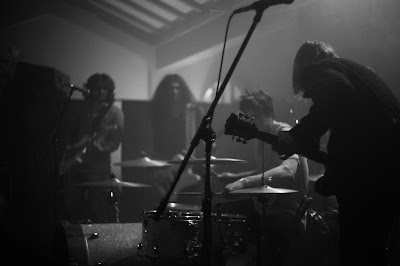 © Joo Joo Ashworth
Do you have a funny or interesting story from a live show that you’d
like to share?
I guess Craig Fox from the Greenhornes was at one of our shows, at least
that’s what I was told.  Who knows.
You have played with some of my favorite musicians out there including
Black Rebel Motorcycle Club who are just insanely talented!  Who are some of your favorite artists you’ve
shared a bill with?
Opening for Black Rebel Motorcycle Club was hands down one of the
coolest experiences I’ve ever had.  We
got to play with Hacienda, they’re an amazing band from Texas and playing with
The Spyrals from San Francisco is always a good time.
Where is the best place for our readers to keep up with the latest news
from Cab 20 like upcoming shows and album releases?
As of right now Facebook, but we’re working on revamping our website to
make that the go to place.
I
love having a digital copy of an album to listen to whenever I might wish but
there’s something about having an album to hold in your hands, liner notes to
read and artwork to look at.  It all
makes the music listening experience seem more complete somehow to me.  Do you have any such connection with physical
releases?
Having a physical copy of an album is such a rewarding feeling.  I like to own albums and create my own
library.  Things like Spotify are turning
people away from that.
Do you have a music collection?
If so can you tell us a little bit about it?
like to own and listen to bands old and new on vinyl.  I own all the Desert Sessions on Vinyl.  I’m pretty stoked on that.
You guys have released several CDs as well as two albums on vinyl at
this point and I’ve seen you discuss the possibility of a cassette tape
release.  With the wide array of mediums
available to musicians today I’m always curious what people think about various
mediums and why they choose the specific mediums that they do, can you tell us
a little about the choices you’ve made in those regards and why they were made?
Vinyl has the best sound quality.
It’s real.
Digital music and distribution is rapidly changing the face of the music
industry.  On one hand it exposes people
like me to a myriad of music that we would never otherwise have heard of, and
on the other it’s undermining decades of infrastructure and work.  What is your opinion on digital music and
distribution?
Digital has made it easier to do things yourself, whether that is
touring, producing, etc.  It has made
people less dependent on managers and industry folk who don’t know how to adapt
to the times so it’s not all bad but there are still things like dub step or
whatever it’s called now.  As for
distribution, I don’t think the physical release will ever die.  The real thing will always prevail.
I
ask everyone this question to try and keep up with the never ending torrent of
amazing bands out there today; who should I be listening to from your local
area or scene that I might not have heard of?
Dahga Bloom’s amazing go check them out.
Jesus Sons are about to blossom too.
What about nationally and internationally?
Nationally: The Spyrals from San Francisco are like Credence with a
psychy edge, Max Pain and The Groovies are rad dudes from Salt Lake City, Long
Shots from Fort Worth, Texas.
Is there anything that I didn’t ask or that you’d like to discuss?
Our next show is at Harvard and Stone in Hollywood, California with Blac
Jesus & The Experimentalists June 11th 2013. 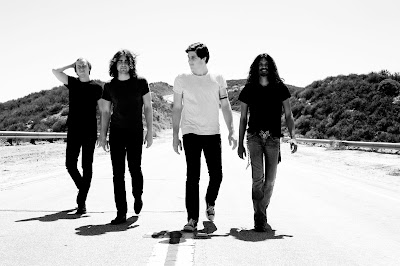