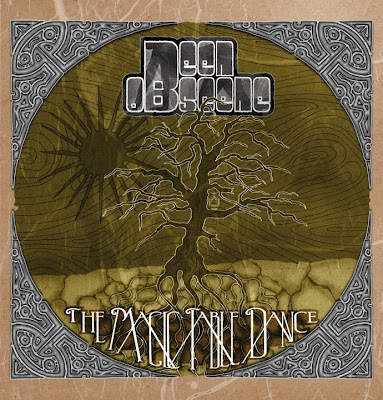 Interview:
1. Thank you very much for agreeing to do this interview! When and where was Been Obscene born?
Thank you too! It’s a pleasure for us. My name is Tommy, I am the lead-singer and guitar player and I’m going to answer your questions. Been Obscene was originally founded in 2005 in Salzburg. In our current formation, we are playing for about 3 years.
2. Tell us about the begging of the band?
Peter, Phil and I went to school together. Peter was the lead-singer in a school-band called “Schließmuskel” but he wasn’t really happy being the front man so he asked me to join the band. We did some songs together and played a punch of gigs. Soon Peter and I realized that we had to go our own way. We started working on many ideas as a duo for about a year, in the meanwhile we were looking for a drummer and a bassist. We tried to persuade Phil to become a bass player for quite a while… In spring 2005, all of us went to a Queens of the Stone Age show in Prague. After this amazing concert we were sitting together, talking about the great impressions we had. I told Phil that he is crazy if he still has doubts joining us. He answered: “I’m in”. Then we asked Markus Gross, a friend of us, to play the drums and he joined. We started to arrange all the stuff Peter and I were working on as a duo. We did about 12 or 13 songs and played our first shows as a complete group. Afterwards, we were writing more songs and sometime in 2007 we recorded the material, unfortunately we didn’t like how it came out so we decided not to release it. 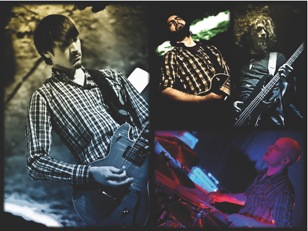 In the meantime, I was already working on completely new ideas. I realized, that the “old” stuff sounded too enforced, not groovy enough. I tried to write songs, which feel effortless but intense at the same time, kind of “out of the body and soul”. The major part of the songwriting of today’s “The Magic Table Dance” happened in this period. Although we were very frustrated that our first recording didn’t work well, we kept on going because of the good new material. Because of it we had to change our drummer, which was not so easy, because Markus was and still is a very good friend. On the other hand it’s never easy to find a good drummer, so we didn’t have one for quite a while. Someday in the Spring of 2008 Phil and I went to the Rockhouse “open stage jam”. We saw a guy playing in a pop formation. He had such a great punch and groove. I said to Phil: “That’s our man!” And you know what, he still is 😉 His name is Robert – our one and only great drummer! I would say that was the starting point of our career, of Been Obscene as it is today.
3. Why the name Been Obscene?
Sometime in summer 2005, Phil and I were hanging out at the riverside, having fun and thinking of ideas for a band name. Then “Been Obscene” came up and I thought: “wow, that’s it”. It was a feeling like: Hey, we are leaving stuff behind, a new start, a new band, etc. We were still very young but had already realized, that we want to emancipate at some point. On the one hand it was definitely the obscene band name “Schließmuskel”, on the other hand it was our worldview we had during our adolescence we just wanted to get rid off. “Been Obscene” doesn’t really have to do something with “obscenity”. It’s not like we’ve been mad people before or stuff like that. It’s more the idea of letting go, never stay at one recent point, always questioning oneself, what you did, what you’re doing and finally (and that’s the most important thing about it) not being determined musically by our own band name!
4. What are some of your influences?
Hmm… That’s a difficult question because they are always changing. One of the biggest influences is music out of the Palm Desert scene (Kyuss, Qotsa, Desert Sessions, Masters of Reality, Fatso Jetson, a.m.m.), the Elektrohasch scene (Colour Haze, Rotor, Hypnos 69, Hainloose, a.s.o.) and never forget the origins back in the 60ies/70ies… Especially bands like Led Zeppelin, Black Sabbath and Pink Floyd.
But you know I think it wouldn’t be fair just to name some big names. We also have quite good musicians here in Salzburg. We came in contact with bands like Steaming Satellites, Maze of Mind, Plastic Monroe, Daishi, Go Bananas, Kassiopeia or Orgasmathoth…  I guess it was important for us to see that there are people who take music seriously and love it. And you know, I love those bands too… I also use to go to Jazz jam sessions. They are very inspiring. “Freakin’ Rabbit” is one of the songs which came out of the Jazz-inspired mood.
So, it’s not easy to talk about influences because something or someone might inspire you but you might not see it. There is so much music you hear, so many people you meet, so many landscapes you pass and so many situations you live through… That’s all inspiration…
5. Were you in other bands before forming Been Obscene?
As mentioned before: “Schließmuskel”. Peter used to be the bass player of Daishi for a while. Robert used to play in many different bands, from cover to jazz, but now his focus is Been Obscene as well. I’ve got another project together with our former drummer Markus and some very close friends. We’re still not sure about the band’s name. We already have some very cool stuff. I’m looking forward to release an EP some time… Hopefully soon 😉
6. You have an LP out called The Magic Table Dance. Can you present us your new album (how do you like it, how it was produced and recorded etc.)?
The “Magic Table Dance” was recorded at “Emanuel Krimplstätter Studios”. Obviously a guy called Emanuel recorded us, as well as bands like Steaming Satellites, Plastic Monroe, Olympique or Kassiopeia. It was pretty funny because we recorded just a stone’s throw away of our rehearsal room. We came in, having the clicks prepared and recorded everything in two live sessions, mainly focusing on the drum parts. Right in between we were crazy enough to play at the Low Drone Festival together with Colour Haze, RotoR and Steaming Satellites. Afterwards we were working on the overdubs while Robert left to New York to complete his college degree at the Drummers Collective. We were recording lots of different things because we wanted to have many choices for the mix down. It took us quite a long time to get everything done because of all the normal business everyone had to take care of. However in the end everything went pretty well. We love the sound and are pretty content with our performance. I guess it’s a very beautiful debut… 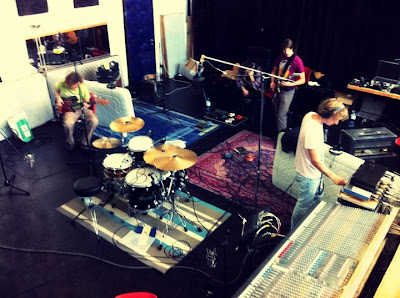 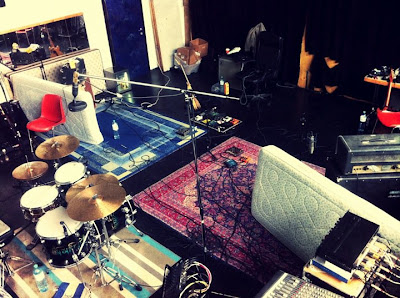 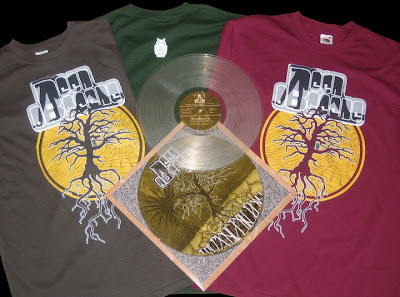 7. Would you also mind telling us about the songs. If you can share a few words about the songs on the LP? I really dig Demons!
I guess each song is unique. We tried to play many different styles and still sound original at the same time. We wanted to avoid that things would become boring for us. And they still haven’t. So I guess we did very interesting songs.
But I see you want me to tell something about Demons? You know, Demons is a very special song for us. I started to write this song around summer 2007. The entire idea of the song was attracting me so much that I couldn’t stop searching further for what the idea wanted me to find. It was kind of a very interesting procedure. I took my guitar to places where I haven’t taken it before. Once a good friend of mine and I went fishing and I wrote a very important part of Demons, you know… Another thing is that Phil and I were complaining about the world’s problems, recognizing there’s something going wrong. We were discussing a lot about economy, social conflicts, feelings and musical expression. So we wrote some pretty prophetical lyrics together. It was obvious for us that the financial and social crisis had to come. Then we started to put all these ideas together and play it in a band. And all those pieces just stuck together. It was magical… I love the dynamics in this song.
8. How is touring going for you? Are you satisfied with it? Share an interesting experience you had from concerts.
I would say that we are very satisfied with it. We were already touring a lot this year. 2011 is like the “Been Obscene’s entering Europe” year for us. We already played at the great Duna Jam in 2010. But touring through clubs is quite different. It’s very nice to see that we’ve got supporters in places that are far away from our hometown. One of the most interesting places we ever played is the “Rümpeltum” in St. Gallen, Switzerland. We already played there in January 2010 but didn’t have a record yet. This year we played there during “The Magic Table Dance” tour. Both times it was unbelievably cool. We played until 2 or 3 in the morning, because people didn’t want us to stop. So we stood on stage for about 3 or 4 hours, played our regular set and then we were just jamming. It felt like being the house band for those fantastic people. We had a wonderful time. Other than that what happens on tour stays on tour… 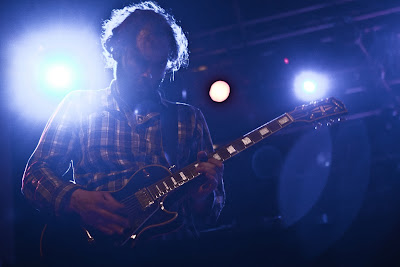 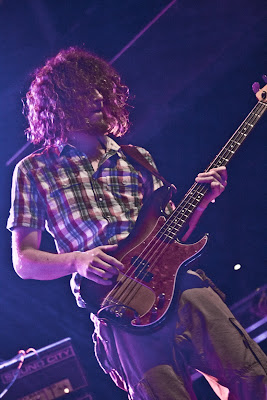 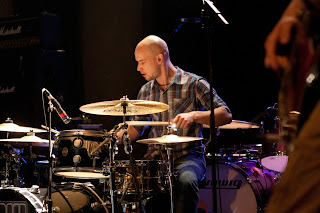 9. How about some future plans for the band? By that I mean do you have an idea for new album in the future? Where will you go touring? We will see us in Slovenia!

We are in the studio right now to record our new album which will be released on Elektrohasch again. It will be called “Night O’Mine” and comes out in September this year. Of course there will be an album release show at our hometown Salzburg on September 24th followed by an European tour which kicks off on September 28th at Klub Gromka in Ljubljana. So you will see us for sure! We are looking forward to it! 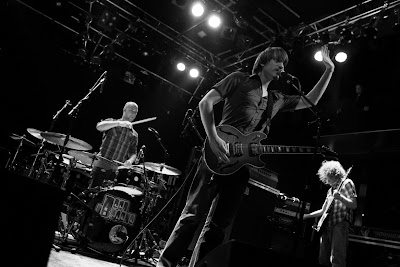 10. What is your opinion about psychedelic scene these days?
I guess people are getting rid of today’s musical industry. It seems like the industry are kidding us, showing us that they are able to make every piece of crap big just through promoting and hyping it enough. That’s why people get more and more interested into underground music, honest music. The psychedelic scene is one of those scenes where you can find original music in its naked purity. I love this scene because everybody who is there is very peaceful and friendly. Furthermore it is very interesting that many people in this scene are buying music on vinyl. It’s like a return to good values.
11. Thank you very much for your time and effort. Do you have anything else to say about the band or yourself that I didn’t ask?
Thank you very much for doing this interview. It was very interesting for me to reflect our work. I just wanted to thank all the people who are supporting us, buying our LPs and CDs, going to our shows or writing great reviews. We are very grateful for all of this and the fact that we can reach and touch people all around the world with our music. Thank you!
We are looking forward to see you soon at Klub Gromka 😉
All the best,
Tommy 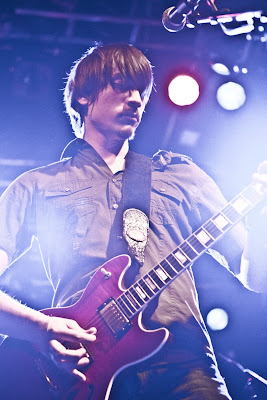