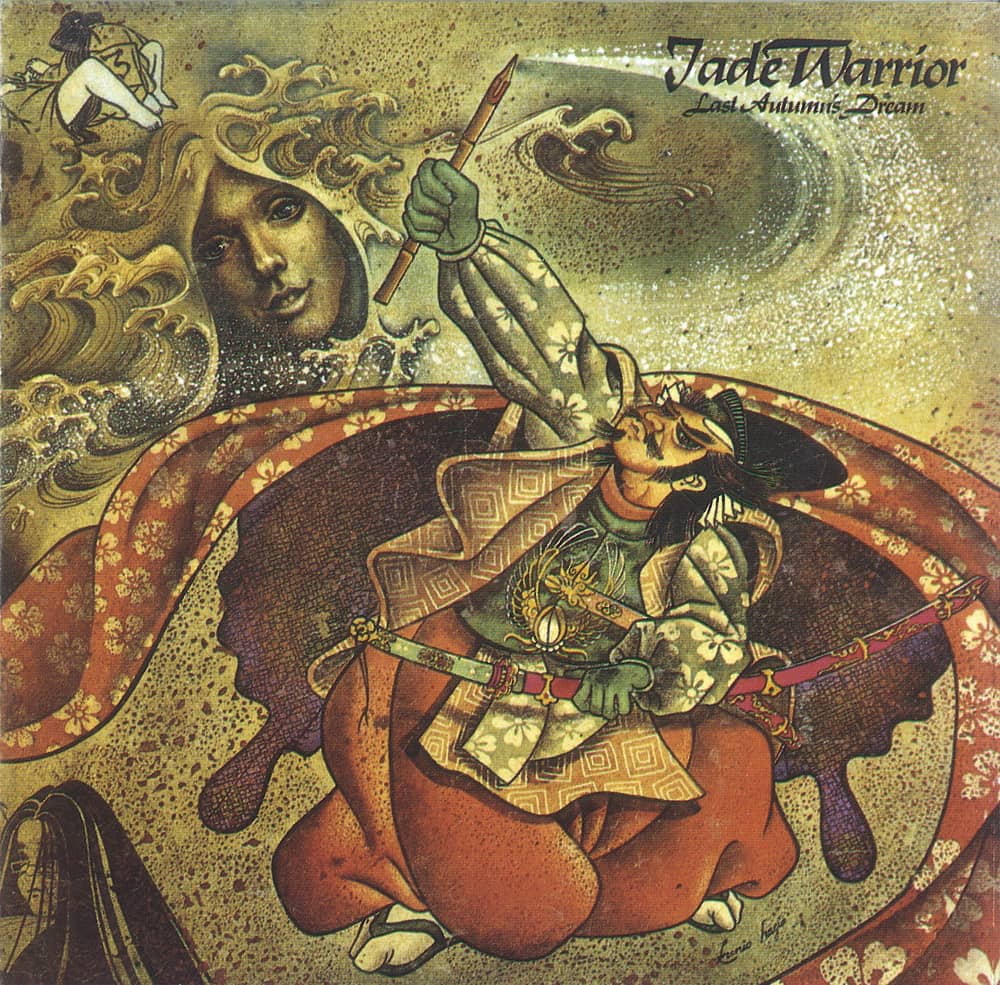 The LP stands out as one of Jade Warrior’s finest moments and its 50th anniversary is marked by an outstanding reissue on Cherry Red Records’ Esoteric Recording imprint.

The album opens with the gentle, folkish ‘A Winter’s Tale’ with its acoustic guitar and overdubbed electric guitar by Tony Duhig and ethereal vocals courtesy of Havard. The tempo quickens as Havard and Price join on bass and drums. Duhig’s lead line is beautiful, as always, on this tune of sitting by firelight smelling pinewood and closes with a chorus of “la la’s” and a hot solo by Duhig. ‘Snake’ is a three minute tour de force featuring David Duhig’s lead electric guitar joined by brother Tony’s guitar and crashing percussion by Price complemented by Field’s haunting flute as Jade Warrior shows off its heavy side. ‘Dark River’ opens with Field’s stark flute, Price’s gentle drums joining its lofting, lilting melody, with Tony Duhig’s electric guitar aided by Field on acoustic guitar, and both adding percussion parts to give the instrumental number its unique flavor. ‘Joanne’ is a folk tune with fiery lead burts from Tony Duhig standing in contrast to the restrained deliveries of Field’s percussion, Price’s drums and Havard’s bass and vocals, with the song’s title repeated over and over as Duhig supplies a distorted, psychedelic electric guitar outro. ‘Obedience’ is an instrumental featuring Tony Duhig on acoustic, electric and bass guitars. Jon Field is the only other performer on this moody, spacey tune, contributing tablas and piano. ‘Morning Hymn’ features a gentle melody with Tony Duhig’s acoustic and lead electric guitars supplemented by Field’s gently floating flute and Havard’s lilting, echoed vocals giving the song its moody, yet most relaxing feel. ‘May Queen’ is a gorgeous piece of folk psych. Harvard’s haunting vocals and Field’s flute give the tune its spacey, ethereal vibe, with Tony Duhig’s restrained electric guitar taking over for the tune’s final minute and a half. ‘The Demon Trucker’ is a popish dance number with both Duhigs on guitar, Field on flute and percussion, Price on drums and Havard on bass and vocals. The short, two and a half minute track is simple yet delivers an infectious, irresistible melody. ‘Lady Of The Lake’ features a moody theme with its restrained acoustic guitar and sparse sound blending perfectly with Havard’s spellbinding vocals and Tony Duhig’s gorgeous electric lead line leading up to an extended solo by Duhig which plays the tune out. The album closes with another moody, spacey track, ‘Borne On The Solar Wind’ which contrasts Tony Duhig’s heavy lead guitar with the gentle flute and piano of Field and drums of Price. The tune is almost instrumental, its only lyrics being “the solar wind fills the sails of her golden boat, and slowly lifts her into the heavens”.The tune becomes heavier as it progresses and could easily go on far beyond its three minute run time, but in any case is a perfect ending to this classic album.

The 50th anniversary edition of ‘Last Autumn’s Dream’ comes in a digipak and contains a twenty page full color booklet, with full musical credits and all original album artwork joined by an extended essay by Steve Pilkington and complete lyrics. The album sounds better than ever thanks to the 24 bit mastering from the original master tapes by Ben Wiseman. ‘Last Autumn’s Dream’ will appeal to fans of 70’s rock, progressive rock, British rock and rock music in general and comes most highly recommended..