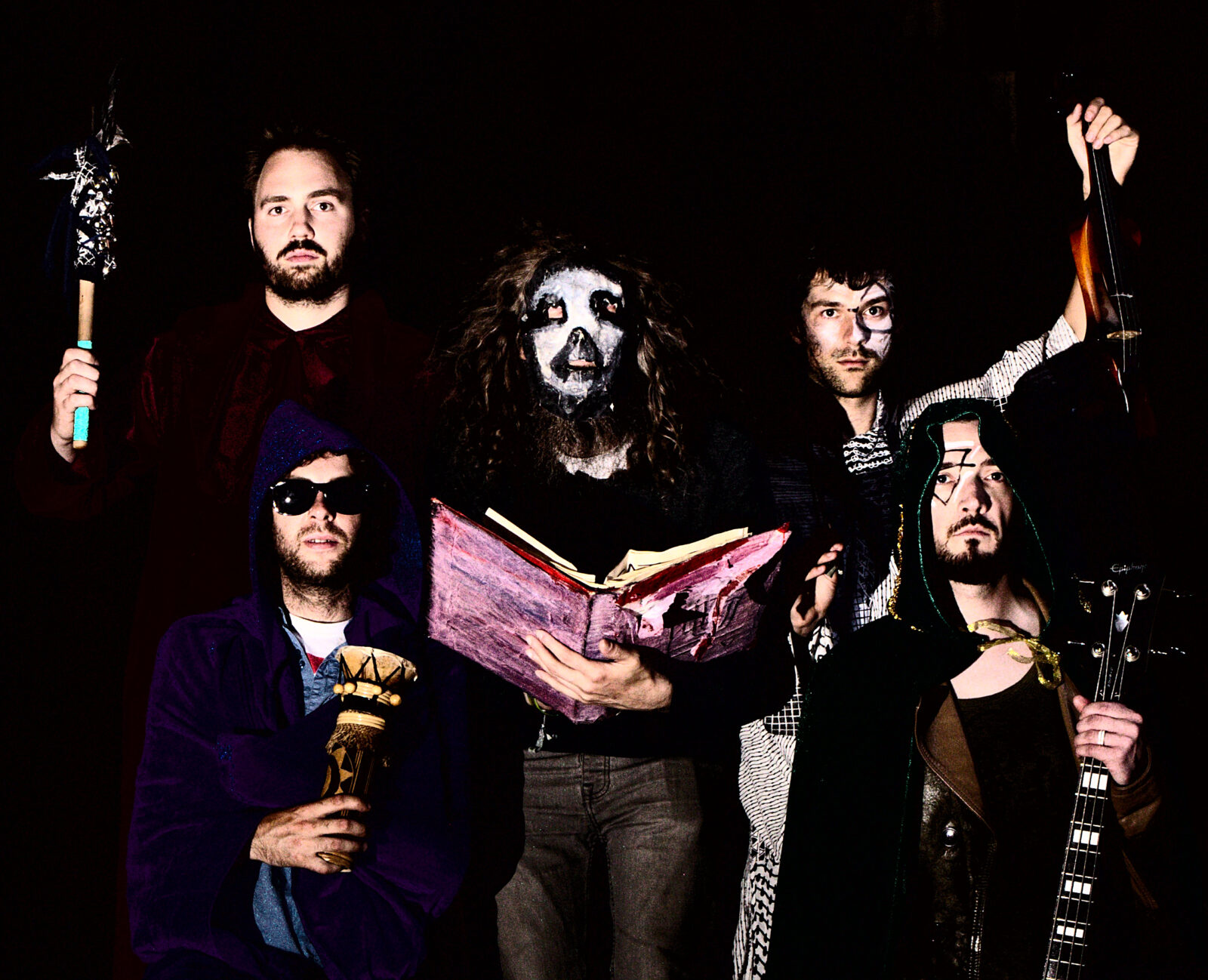 Sloth Metropolis formed in Glasgow in 2012. Once the name was chosen, the band’s mascot, “The Sloth of the Metropolis”, took on a life of his own, linking songs and live shows into a central story spanning multiple albums.

The unique electric-violin and keyboard driven sound of Sloth Metropolis combines influences from the dark corners of prog, folk, doom and increasingly on their new album, ‘Moth Necropolis’, expansive psychedelic improvisation. Their first trilogy of albums, ‘The Sloth Cycle Volume 1’, ‘Origins’ and ‘Humanise’ focused on the Sloth of the Metropolis and his occult connections and transformations across time and space. In ‘The Moth Necropolis’, a new and shadowy figure emerges – the Moth of the Necropolis. In an attempt to pin down the moth, a paranormal investigator pieces together clues from cryptozoology, astrobiology, science fiction and the starry-eyed prophecies of Timothy Leary… 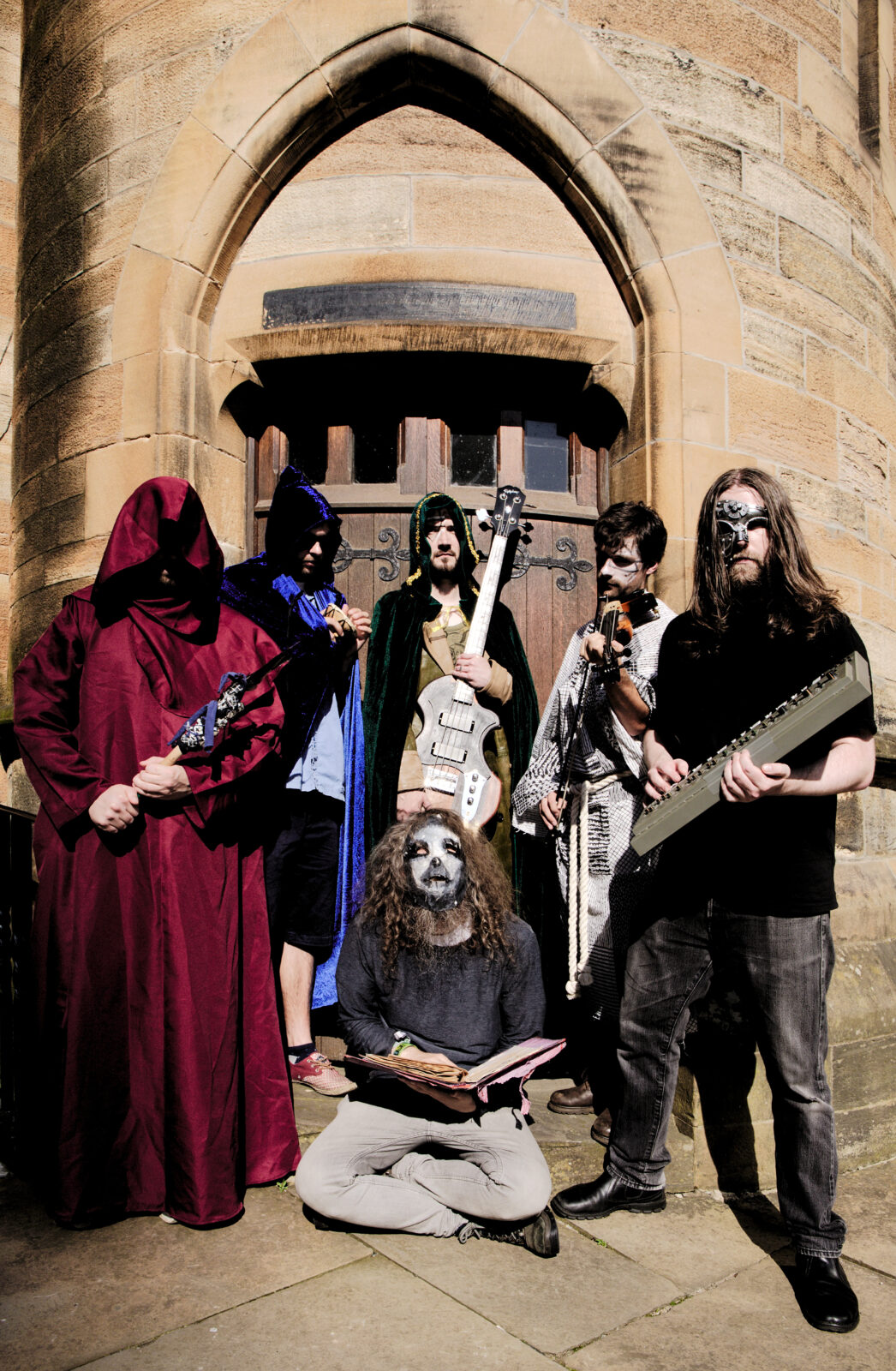 “In an attempt to pin down the fabled Moth, a paranormal investigator pieces together clues from cryptozoology, astrobiology, science fiction and the starry-eyed prophecies of Timothy Leary…”

How did your band’s name come about? It must be an interesting story…

Calum: A few months before starting the band a friend of mine complained of feeling like a human sloth, which led to the idea of “The Sloth of the Metropolis”. The phrase stuck out and Sloth Metropolis entered a list of potential band names and came out on top as everyone’s favourite.

The band is a decade old now. That’s quite something. Can you tell us about the early beginnings and how did you guys come together originally?

Calum: When we were at Glasgow Uni, myself, founding guitarist Eddy Lee and bassist Lewis MacKenzie were in a university band society, where musicians would meet up, jam, chat about their favourite music, start their own bands and organise the occasional local gig. Lewis was in a band called Contact Lost, whilst me and Eddy had a sort of psych folk thing called Minor Arcana. Once those projects fizzled out we joined forces for something more ambitious – I had a vague idea there would be prog and psych influences but hadn’t decided much beyond that. We were joined by Steve McNamara on drums. I had met him the previous year on a night out when my jacket was stolen so me and my girlfriend were hanging around the club around closing time and struck up a conversation with him outside. A year into playing with Sloth Metropolis, Eddy left to focus on his studies and we brought in Alastair Milton who had played keys in Contact Lost. Lewis left in 2016 to work in Leeds, and eventually we got together with our bassist Pete Fleming in 2017, making up the present line-up.

It seems that you take a close attention to the band’s sound with its unique electric-violin and keyboard that take your sound to a higher level of psychedelia. How did you first get the idea to use electric-violin?

Calum: I originally grew up playing Scottish folk music – my dad plays the bagpipes and that was my first instrument as well, before I began learning the violin or “fiddle” when I was 7. Around the age of 14 I started getting into rock music, and whilst I was beginning to pick up some electric guitar, I felt way more comfortable on the violin and began experimenting with a pickup and some cheap effects pedals. Soon after I stumbled across bands using electric violin like High Tide, Mahavishnu Orchestra, King Crimson, and Don “Sugarcane” Harris’ work with Frank Zappa, which were a huge inspiration showing just how far you could push the violin as a rock instrument.

Pete: I’d pitch in with how challenging but very rewarding it has been to play in a band without electric guitar and feel I have learned so much listening to and playing with the rest of the band.

Maybe a few words about your influences and what are some of the latest releases you enjoy?

Calum: The above-mentioned bands are definitely there in the mix. Black Sabbath and Hawkwind are the two mainstays everyone in the band agrees on. Me and Milton are big fans of Gong, Van Der Graaf Generator and Soft Machine, which comes into the song structures and the sound of the keys, especially on our previous album ‘Humanise’. Pete is an aficionado for all things darkly atmospheric – goth, post-rock, post-metal, which has helped to shape the vibe of ‘The Moth Necropolis’ in particular. The doom/stoner/sludge/heavy psych scene has also been an important influence on ‘The Moth Necropolis’. For new releases – a shout out to our pals Big Hogg, a canterbury-style prog band who released their album ‘Pageant of Beasts’ last summer. 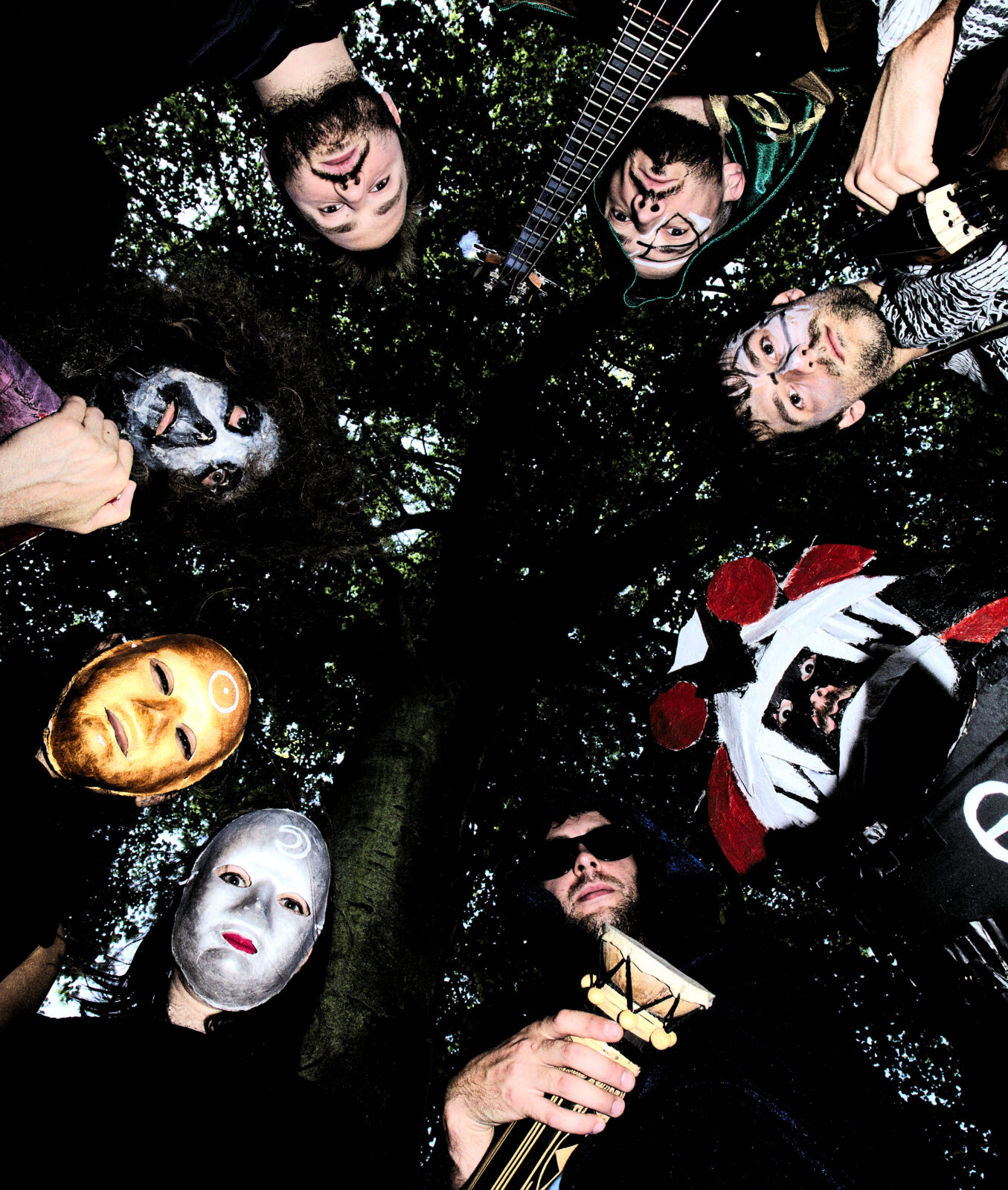 A concept plays an important role in your music. What were some of the initial ideas that led to the trilogy of albums?

Calum: Our first trilogy of albums, ‘The Sloth Cycle Volume 1’, ‘Origins’ and ‘Humanise’ are the story of The Sloth of the Metropolis, whilst ‘The Moth Necropolis’ begins a new phase and a new focus on the mysterious Moth of the Necropolis. I’ve always had a fascination with artists who make their own unique creative worlds and link together different albums and mediums, including bringing concepts alive in performances – Gong’s ‘Radio Gnome’ trilogy, the mythology around Funkadelic’s albums and Magma’s ‘Kobaïa’ for example.

Can you elaborate on the concept?

Calum: The debut album, ‘The Sloth Cycle (Volume 1)’, introduced us to the Sloth of the Metropolis as he woke up and explored the city. In the EP ‘Move’, the Sloth was forced to go flat hunting, but found a mysterious manuscript whilst clearing out his old house. In ‘Origins’, he opened up the manuscript and read the story of Aengus Rudach—an Alchemist from the 17th century who sailed to a mysterious island in the Atlantic after being exiled for witchcraft. Whilst putting together an experiment aiming to create human perfection, Aengus instead found himself transformed into a blissfully static sloth. In ‘Humanise’, we find that the manuscript and the occult power of the sloth has leaked into our own reality, demanding a musical ritual drawing on its spells and rituals.

The latest album, ‘The Moth Necropolis’ reveals a new and shadowy figure – the Moth of the Necropolis. In an attempt to pin down the fabled Moth, a paranormal investigator pieces together clues from cryptozoology, astrobiology, science fiction and the starry-eyed prophecies of Timothy Leary…

We are very excited to hear ‘Moth Necropolis’ on vinyl. Are you excited to be part of Nasoni Records?

Calum: Absolutely! This will be our first release on vinyl & it’s an honour to do it with a label so well known and respected in the world of psych rock.

Can you share some further words about the recording process and the tracks on it?

Calum: The initial recording and mixing was a very DIY affair. Before going into the studio we made demos for some of the songs on ‘Humanise’ in our practice studio. Our practices generally include a lot of jamming, some of which got recorded during the demo sessions, and became the basis of the ‘Moth Necropolis’ tracks. As the pandemic set in in April 2020 and we weren’t able to gig or meet up for practices, we dug out some of those psych jam recordings over lockdown and began adding individual overdubs in our respective homes. I mixed everything that summer and the final thing was mastered by Andy Miller, who has produced several legendary Scottish bands including Mogwai and Arab Strap.

Alastair: As the keys were largely inaudible in the original tracks my main goal for the organ overdubs was to record as single tracks without drop-ins and react to the music to really capture the essence of playing a live jam with the other members. 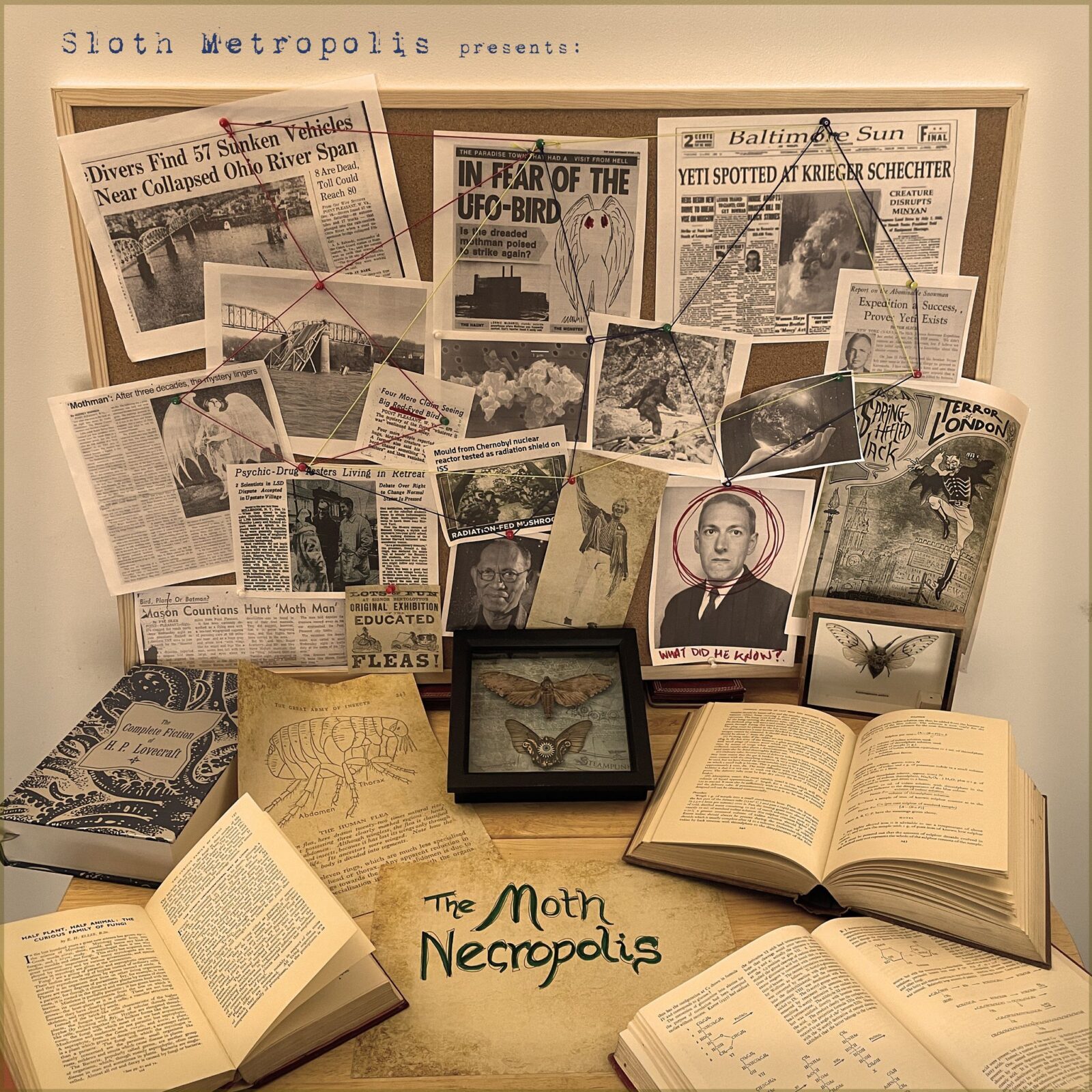 Is there anything else that you have planned for 2022?

Calum: We will be gigging through 2022 to support the album, COVID permitting! Our album launch in Glasgow is on the 1st of April, followed by Edinburgh on the 23rd of April, Inverness on the 28th of May, then English festivals Sonic Rock Solstice 16-20th of June and Kozfest 29-31st of July. We’d love to play further afield and get out to mainland Europe soon – especially now we’ve teamed up with Nasoni.

Are you working on any other side projects?

Calum: I have a black/folk-metal project called Nemeta which released a self-titled EP last September, and release solo music under my own name Calum Calderwood. In the past year I’ve also contributed violin for The Bog Standards on their fundraiser EP for the Glasgow Unity Centre, and on the latest Cosmic Dead split with Giöbia. 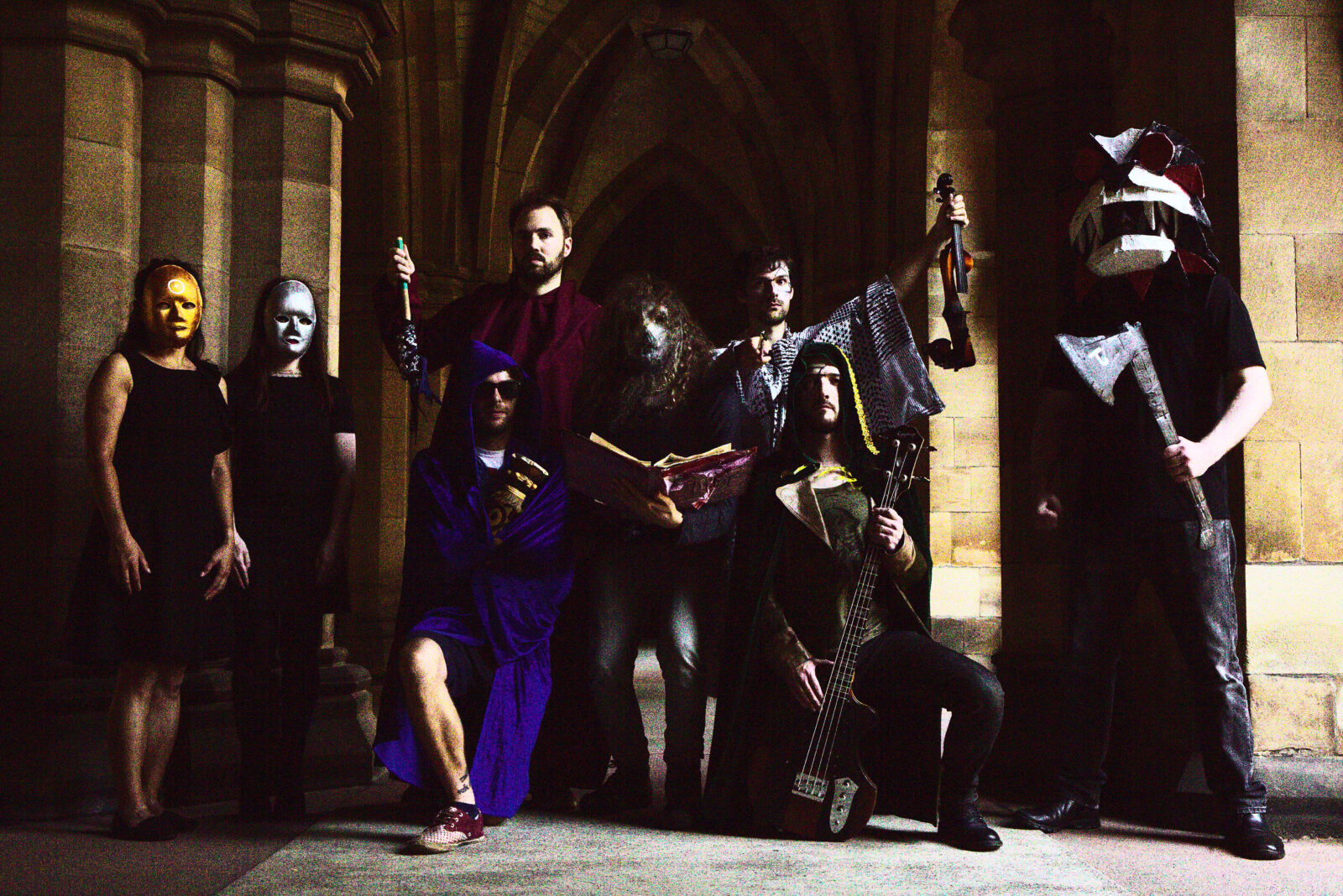 Thank you. Last words are yours.

Calum: Thank you too! The Sloths hope you enjoy listening to The Moth Necropolis as much as we enjoyed making it. Cheers.