There is no one like Legowelt. His vast musical output spans many different worlds – some real, some imagined – and does so in a unique and captivating fashion that keeps listeners enthralled.

Legowelt has been a key figure in the Dutch electronic music scene since the early nineties, steadily relea­sing timeless music that merges the pioneering sounds of Detroit and Chicago with idiosyncratic sci-fi fascinations. ‘Unconditional Contours’ captures Legowelt’s stint at the Swiss Museum for Electronic Music Instruments (SMEM), after he was invited to be the first artist in residence at the institutions ‘Playroom’ project. ‘Unconditional Contours’ was released October 2, 2020 via -OUS label from Zürich, Switzerland. Danny Wolfers has an extensive collection of synthesizers himself, he used hand-picked synthesizers from the museum’s archive and the result is this highly interesting release.

“Ideas take on a life of their own, always.”

How did the project start?

Danny Wolfers [Legowelt]: I played in Fribourg three years ago in a place next to the museum, I think it was called the Fri-Son. The museum wasn’t open yet but the collection was there. They showed me around and asked if I wanted to be involved with the Kickstarter [for the SMEM Playroom project], making an LP that would be recorded there.

What can you say about the creating process? How did you approach it?

I would just sit behind a synthesizer and focus on one synth at a time and record a lot of stuff with it. I would play it with my hands, some sequencing and multitracking now and then. I made a lot of recordings, hours of stuff. Back in the hotel room I would edit and mix down the material into rough tracks. Back home in Scheveningen, Holland I fine-tuned everything and curated a selection of all the tracks I had recorded, this became the LP. 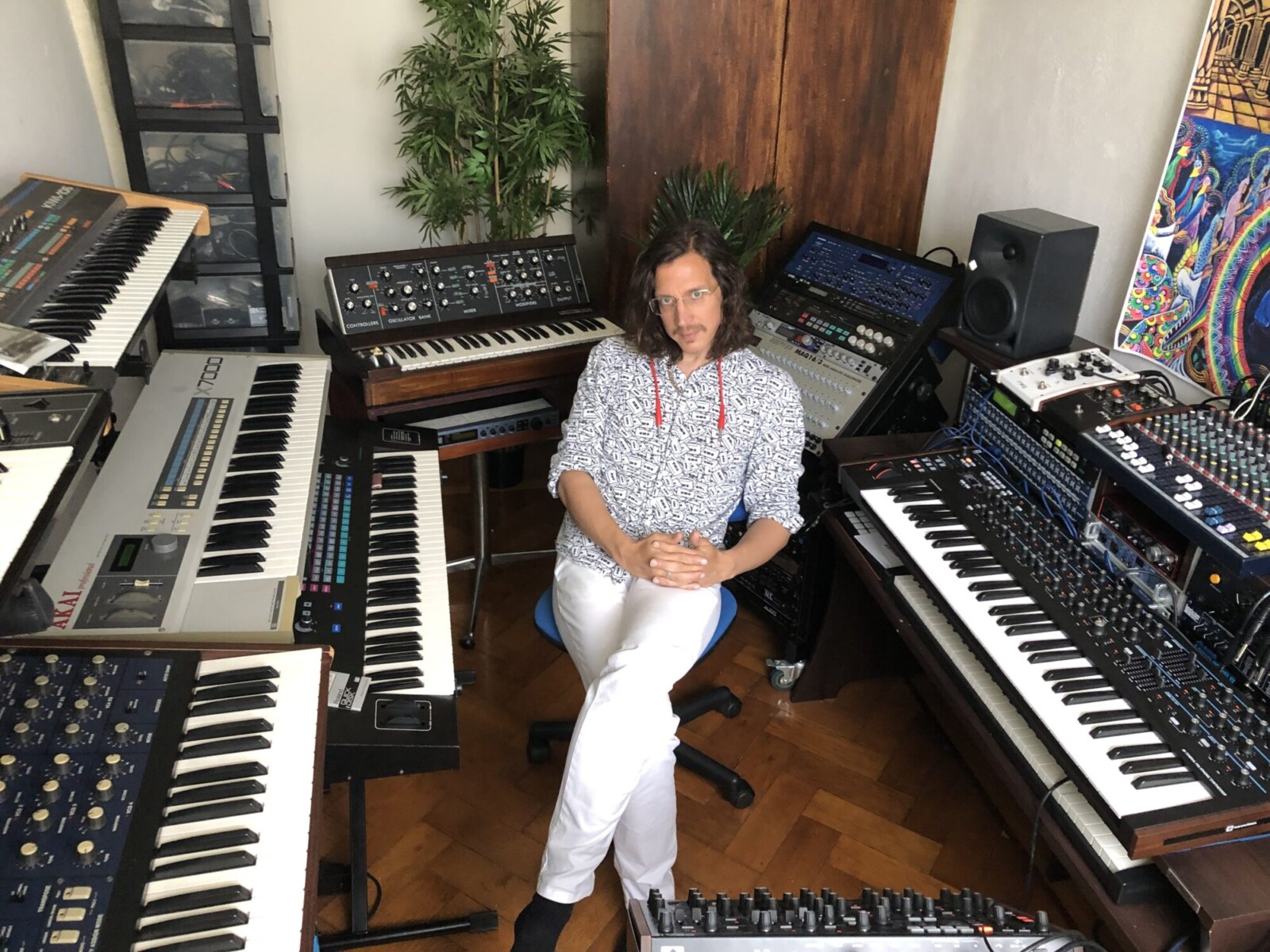 It must have been very difficult to hand-pick synthesizers from the museum’s archive since there was probably such a vast collection? How did you decide what to include and why that in particular?

I didn’t really decide what to use, the synths were handpicked by Roxanne the archivist of the museum. She had set up a bunch already in the studio and later brought in a Memorymoog and some other stuff.

For the technical geeks, would you please speak to your synthesizers and the effects you employ?

Farfisa Syntorchestra, Moog Memorymoog, Sequential Prophet VS rack, Prophet 5, Simmons Clap Trap, FBT Synther 2000, Evolution EVS-1. And I think there was a Roland ProMars in there too.

“There are still limitations in what they can do.”

Did this collaboration help you to discover new aspects of sound?

Not really. A synthesizer that I have never played isn’t going to show me any drastically new sounds, there are no big surprises.

Because most synths work in the same manner, they are based on the same synthesis method. You have of course different synthesis methods but there are still limitations in what they can do. There are nuances and particular character traits in relation to the machines of course but I wouldn’t go as far as saying that these characteristics comprise new aspects of sound. 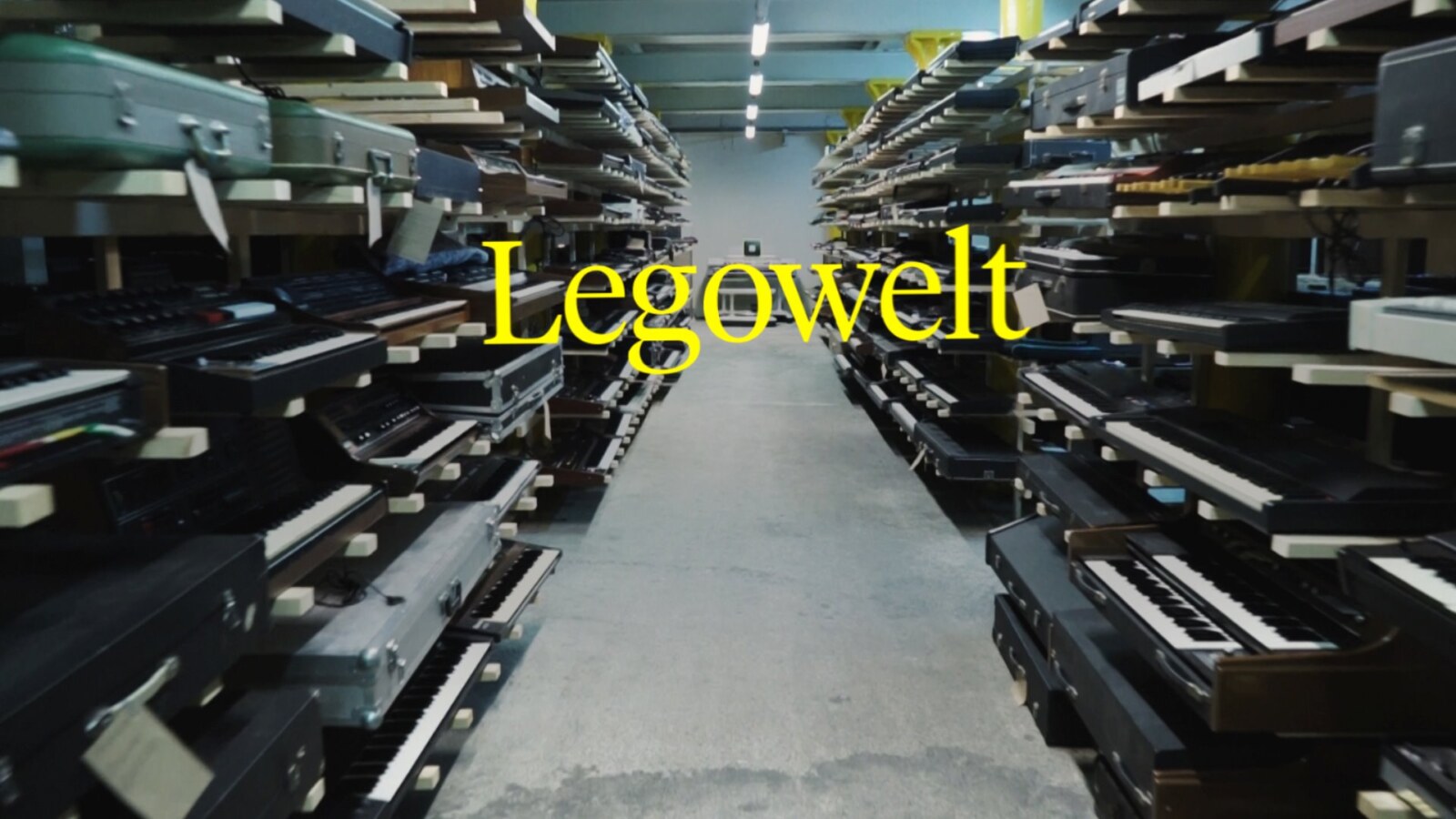 I guess new aspects come in the form of the control methods on the synthesisers, the interface or how you play / enter the notes. The Farfisa I used for example is very focused on instantly playing melodies.

It has a really nice little keyboard and the way the controls are placed will compel a certain way of playing; very haunting and intense. I don’t really know exactly why, maybe it has something to do with the background culture of the synth. You can really see the difference between different ‘ideologies’ of synthesizer designs when it comes to this.

The Farfisa is Italian, from the 1970s. Back then Italy had a huge synthesizer industry which completely disappeared over time. This Italian synthesizer industry was based near Pescara on the east coast. I think it’s called the Marche area or something. But in the 1970s & 1980s there were at least twenty synthesizer / keyboard / organ manufacturers in that area – it was known as the ‘Italian Silicon Valley of Electronic Instruments’. This all evolved from the traditional accordion industry that had already existed there for the last century or so. All these synth manufacturers started with accordions in the 19th century and somehow this “accordion state of mind” seeped into their synthesizer designs. The accordion is an intense instrument to play, with all its keys and the way you have to squeeze the instrument….just like you have to squeeze the Farfisa, strangely enough.

American synth companies like Moog & ARP mostly started completely fresh in the 1960s & 1970s and had no background in more “conservative” instruments. So, they would design these instruments with a completely different mindset, more technological and futuristic. Additionally, brands like Buchla were very avant-garde and were pushing everything in new directions without any connection to instruments like accordions or organs.

Generally, Japanese manufacturers are sort of in between, I guess… 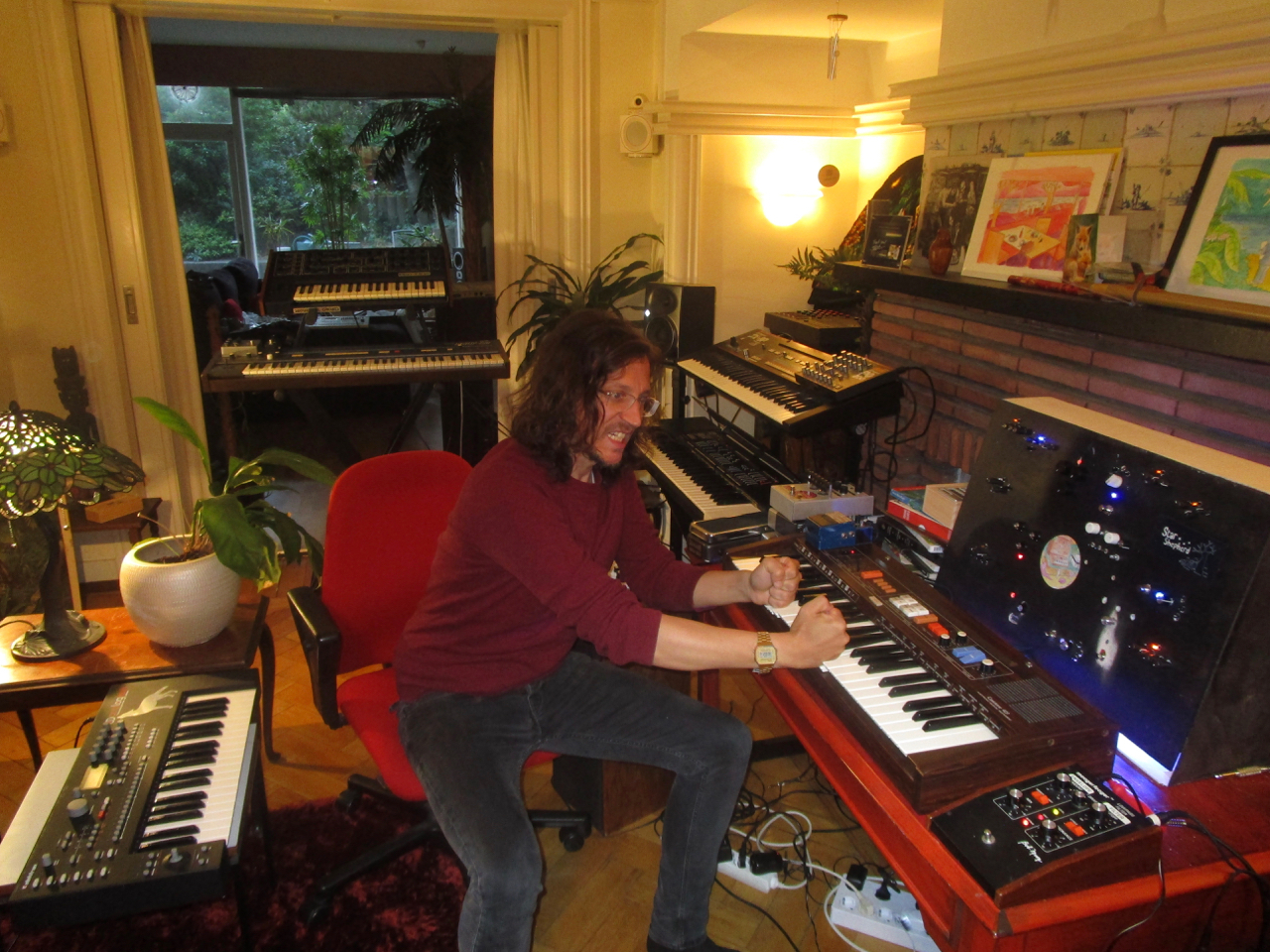 Is your approach to laying down music a building block process?

No, it’s very free flowing, there are really no set rules, it’s always different. Building blocks sounds like a fun metaphor especially in relation to my artist name. I might have once said that making music is like playing with blocks or some shit but that’s just one of those stupid quotes that gets magnified by the press.

“The whole experience really had this European heartland fairy-tale atmosphere.”

How would you compare ‘Unconditional Contours’ to your previous work?

It’s pretty much the same in lots of ways…the factors that are much more important in defining the character of this album – rather than the synthesizers used in the recording – is the location, the time and how that inspired a particular mental state. That played a really big role. Especially with this SMEM album.

It was snowing, you are in a small Swiss town with beautiful views and friendly, inspiring people. There was a sense of magic around; the whole experience really had this European heartland fairy-tale atmosphere. This affected the melodies and sounds on this album strongly.

“The sounds have to have this “magic sparkle” that tickles or massages the brain.”

The two ideas juxtaposed in this question are not mutually exclusive ways of working, these methods overlap.

Ideas take on a life of their own, always. Stories, music adventures or whatever you want to call it, unfold in a maelstrom of intense chaos during the artistic process.

But these stories / adventures are subsequently channelled in a controlled, perfectionist way. The ideas that are created in chaos are quantized, filtered, fine-tuned and polished until I think they are cool and acceptable enough to work as a release.

There are some rumours that I don’t mix down or master my music, I might have said that once in an interview many years ago for fun or because I was irritated with the interviewer and made up some bullshit to get it over and done with quickly. But yeah, I am very focused on EQ, to get a certain sound, definitely not sterile “mixed down properly” like hundreds & thousands of techno records. The sounds have to have this “magic sparkle” that tickles or massages the brain. Sounds can do that, they can massage, caress, cuddle your brain if you intensify certain frequencies.

“Music is a language, a code to project other worlds.”

A concept plays a very important role in your music, don’t you think?

Not really, but I guess I know what you mean. I just hate the word “concept” or “conceptual”, you get into academic art grant territory very quickly with these terms.

I would rather talk about musical narratives, stories. I used to make a record every week back in the 2000s and just would make up an artist name and a sort of loose story behind it; it was like doing comic books or something, a bit like pulp comics / magazines. I was still finding my way. Nowadays I think it’s much more focused and not so pulpy / exploitative anymore. The ideas, or “subjects” of the tracks, as well as the music, are a little bit more philosophical, deeper in some way now. At least, I’d like to think so.

Melodies notes & sounds always emit a world, so these stories and narratives emerge very easily. In a sense the music is a language, a code to project other worlds.

I am coping very well, I live in a complete bubble outside pedestrian, “normal” reality and was therefore very well prepared for this event.

Are you involved in any other projects or do you have any active side-projects going on at this point?

Well yeah, the SMEM project is already pretty old, this happened two years ago in January 2019 so there have been zillions of other projects and things going on, you can check all the stuff here.

I also did the Legowelt – ‘Pancakes with Mist’ album which was pretty successful. A double LP vinyl version of that is in production, I sent the masters off for that last August but everything is so delayed at the record pressing plant; with Covid they can only run half of the machines; at full capacity the workers are too close to each other. Another issue is that every kind of “mainstream” pedestrian artist like Ed Sheeran or whatever is pressed on vinyl these days to sell at Mediamarkt or Target Wallmart or some shit so that’s clogging up the factories as well.

Anyway, I also made a new album with my Zandvoort & Uilenbal project which I work on with Jimi Hellinga. This came out in late April. He is a medieval music expert who plays the Hurdy Gurdy and other historic instruments. He also plays in OZMA, a psych drone band from The Hague comprising the likes of Selwyn, who played in Santa Cruz & Monomyth (you should totally interview OZMA for It’s Psychedelic Baby Magazine!)

The Zandvoort & Uilenbal album is called ‘Folk Triumfator’ and we mix all these historical instruments with electronics. We used a 19th century Harmonium and a 1960s Mixtur-Trautonium too. It will be released on vinyl soon by the Belgian label WéMè Records. Sound wise it’s a bit like Coil meets Kenny G meets Current 93. The vinyl release should come out in January or February.

I’ve also been doing some work for synthesizer companies, mostly doing sound design for the preset patches and making demos.

The most exciting project however is an animation I have been working on, it’s an hour-long feature animation called ‘Ambient Trip Commander’. The animation portrays the story of Samantha Tapferstern who lives a lonely, mundane life working as a repair technician in a small synthesizer store in a medium sized city. 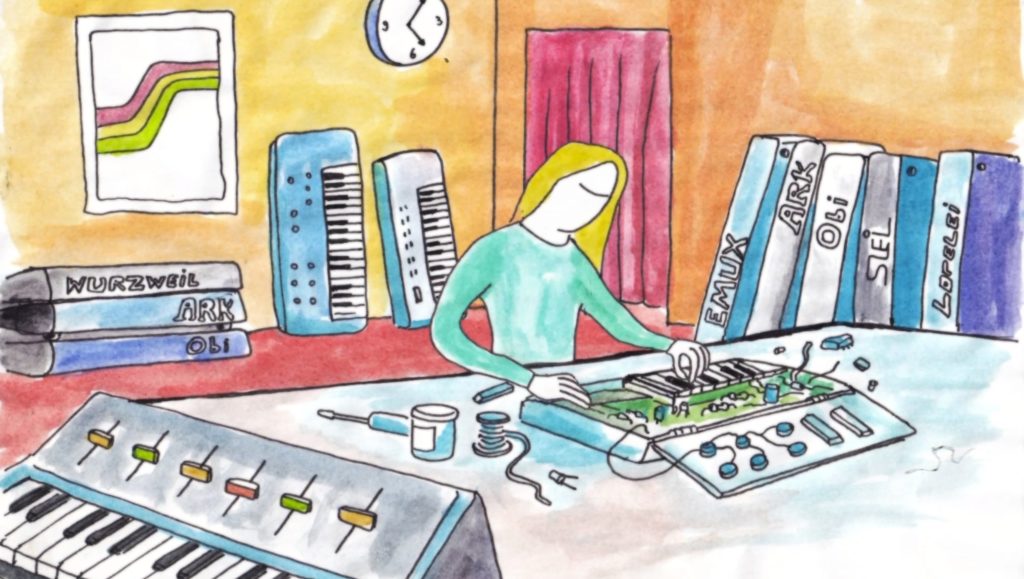 One day she gets a mysterious invitation and a train ticket to travel to a small village in the dark mountainous heartland of Europe. Here she meets a strange group of people who introduce her to a sinister plot… 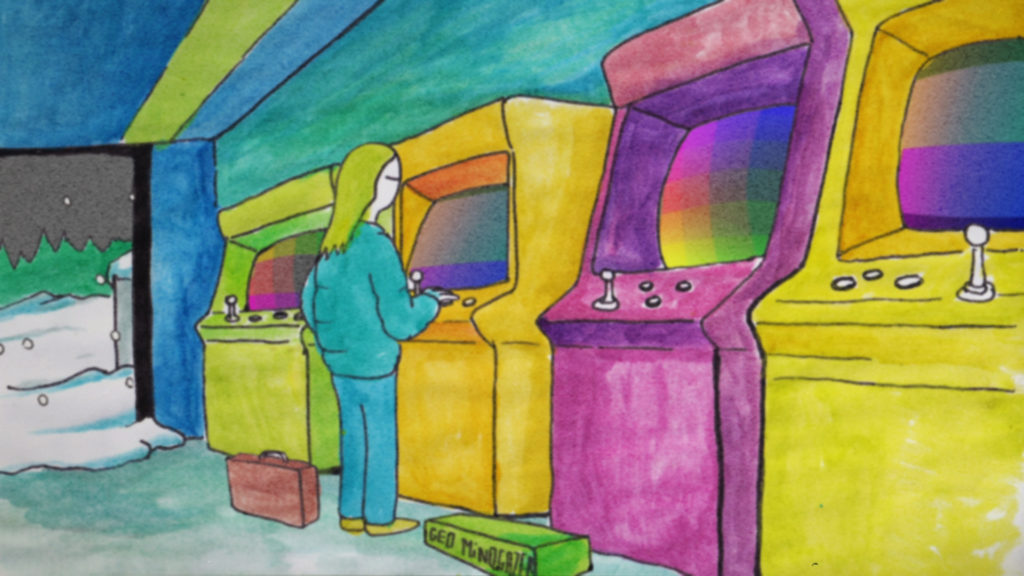 I am going to do a tour premiering the animation at theatres, cinemas, clubs & other venues and will be performing the soundtrack live on synths in early mid-2021. I’ve attached some screenshots from this animation. Danny Wolfers