We are premiering a track ‘Galet dérivant’ from the upcoming instrumental solo Gilles Poizat album, ‘Champignon Flamme’ (out via Carton Records on February 12, 2021).

“It is a story of drifting pebbles in the bottom of a stream.”

Gilles Poizat is a musician and songwriter born in 1967 in Lyon. After classical trumpet studies and a PhD in ecology, he led a double life between scientific research and musical experiences. Among striking meetings in Arles, Lyon and Conakry, Mazalda triggered his plunge into music. The power of bands makes him move intensely. The solo opens new fields he visits as a novice. He begins to sing, to write, finds again his teenage guitar, discovers elementary electronics, and relearns trumpet every day. Always attracted by new vivid experiences, he draws his own path and delivers atypical albums: ‘Micro-vertige et l’expérience du flottement’, ‘Rev Galen’ (with Catherine Hershey), ‘Horse In The House’, ‘Champignon flamme’.

Nowadays, he is preparing a new solo set of songs, plays with Spat’Sonore, with Orchestre Tout Puissant Marcel Duchamp and composes music for ‘La séance’ – a choreographic piece by Benjamin Coyle.

This music of ‘Champignon flamme’ was originally recorded from fall 2018 to spring 2019 as preliminary research for ‘La séance’, a choreographic piece by Benjamin Coyle (Cie Kopfkino) which finally focused on songwriting. Then, this instrumental material, trumpet and electronics, became an autonomous album. It questions the invisible, intimate rituals and personal relationships with our dead.

This new album from Gilles Poizat comes after albums of songs in solo and duo with Catherine Hershey, and after a long-term collaboration with Mazalda. ‘Champignon flamme’ is his first instrumental solo album. He reconnects here with his first instrument, the trumpet, meanwhile augmenting it with a new one, the modular synthetizer. ‘Champignon flamme’ will be released on February 12, 2021 via Carton Records.

“The wish behind the whole album was that the trumpet playing would generate interactive sounds with randomness.”

What’s the story behind making ‘Galet dérivant’ and how will it fit with other tracks on your upcoming album?

Gilles Poizat: It is a story of drifting pebbles in the bottom of a stream. While the water flows continuously (although more or less turbulently), pebbles move very discontinuously, being stuck sometime and then raised and bouncing and bouncing till being stuck again, and jumping again. Pebbles positions influence water flow. And pebbles slowly dissolve in water. 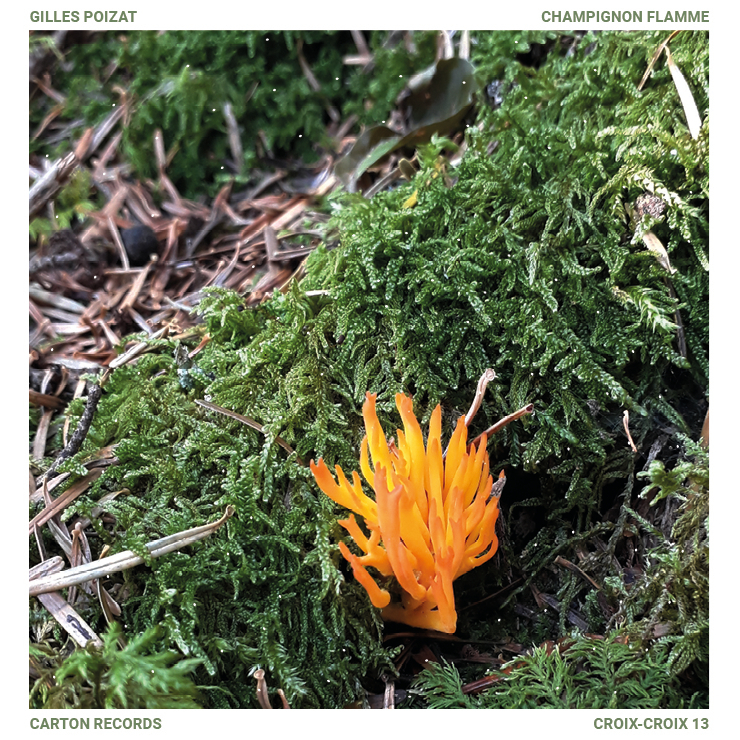 What kind of album did you want to record?

Originally, I recorded most of this music while exploring ideas for ‘La séance’, a dance project by choreographer Benjamin Coyle about the care given to the invisible, relationships with our dead, and personal rituals with objects pregnant with memories. We got time to explore different musical directions and we finally focused on songwriting. But then, I thought that this unused instrumental material, with trumpet and electronics, was telling a story by itself. A kind of trip where you don’t understand what you are crossing, but by accepting to feel lost and by opening your mind to the unknown you may create conditions for enchantment to appear.

Yes fortunately! Nowadays I am playing flugelhorn with Orchestre Tout Puissant Marcel Duchamp, a wonderful band from Geneva. With Spat’Sonore, an experimental spatialized brass orchestra, I play a spat’trumpet and sing, I also sing in an experimental choir which is involved in a project by composer Clément Edouard. Le Grand Bal des Cousins is a dance orchestra. ‘La Séance’ is a choreographic trio piece by Kopfkino Company in which I sing, play guitar, trumpet and dance. All these collective adventures are very exciting. I am also working on a new solo live set with songs, trumpet and modular synth.

You mentioned that Mazalda influenced you. In what way?

We created the band in 2001 and played together as our main activity till the end of 2017. It has been a very intense experience, lots of love and fun! We developed a deep musical intimacy and complicity. It opened my mind to many popular music all around the world, while being attentive to my proper musical aspirations. And eventually it lead me to quit the band to experience other musical adventures, by myself and with other people.

“I fantasize various sound devices and various song forms, and experiment ways to approach it.”

You were studying classical trumpet and ecology. Do you think there’s a certain pattern in your music that is influenced by your scientific research?

Yes probably! Quitting science to music was a way for me to engage a more personal research aiming to get free from conventions and to connect with my proper feelings and desires. In my musical research, I fantasize various sound devices and various song forms, and experiment ways to approach it. Although it is often unsuccessful, it is an exploration process and sometimes, I also find some nice things I wasn’t expecting. I was studying relationships between fishes and their habitat using statistics. In this album I use randomness to generate lively interactive soundscapes. Yes this could be linked!

Can you share some further details how your upcoming record was recorded?

For the first time, I did everything by myself, from recording to mixing. I was happy to experience this autonomy. I also got some good mixing and editing advices from friends. I learned a lot.

How are you coping with the current work situation?

Well, political regime in France is more and more violent socially and physically. The lockdown and other restrictions have heavy psychologic and economic consequences on people and organizations that already were in precarious situations. Although most of the concerts have been cancelled, I have got the chance to benefit from ‘intermittence du spectacle’ so I still receive unemployment subsidies for one year. We still manage to rehearse and record, so we will have many new proposals for live concerts and shows if one day it is allowed again. Gilles Poizat