Anton Barbeau has recorded over 30 albums, but sadly, many people have never heard of him. On a positive note, however, Kawabata Makoto and his Acid Mothers Temple collectives have recorded well over 100 albums and most people probably never heard of them either. So there is hope that someday the world will catch up with Barbeau and this concept double album may just do the trick.

Recorded by a cast of dozens across four cities on two continents and assembled from numerous pieces sent (literally) across the airwaves, Ant & Co. relate tales of love, loss, loneliness, growing up in Sacramento, California, traveling around the world for new musical adventures in Oxford (England), Paris (France), and Berlin (Germany), and sharing his emerging musical tastes from ABBA and Fleetwood Mac to the Beatles, DEVO, Bowie, and Aphrodite’s Child, from krautrock and psych pop to wyrdfolk and industrial electronics. There is a lot of room to air your dirty musical laundry when presented with four sides of vinyl (or 2 discs) and Barbeau makes the most of it throughout the 27 songs on offer. Let’s dive in.

Listeners are encouraged to review Ant’s liner notes on his website to follow the story (he also helpfully included the lyrics on the enclosed nifty poster/lyric sheet), but the general idea was inspired by the film Lady Bird– to “leave home” or take flight as it were for an autobiographical journey, a bird’s eye view of how Ant got to where he is today (locked down in the foothills of Northern California as I type). Bird songs and references abound, from beaks, eggs, and feathers to crows, chickens, swans, and mockingbirds. It’s always best to start at the beginning, so the title track sets the stage with lyrics about flying away to start a new life/career, yet returning to the nest when things don’t exactly conform to your plans. With a little recasting of Springsteen’s own anthem of escape, “tramps like us/baby we were born to run” as “Birds like us, we were always bound to lose, baby”.

‘Across The Drama Pond’ is a bubbly little slice of giggly electro pop with reminisces about his Billy Gibbons (ZZ Top) beard, Brian Wilson (Beach Boys) weirdness, and “Captain Midtown” (apparently “Fantastic” was already taken!). ‘Fear Of Flying’ is a terrible disease for a musician (or bird) to suffer (although I guess Mickey Jupp managed to make a career with it hovering overhead), but this one is a clever juxtaposition of an angst-ridden Ant embarking on a musical career while his alter-ego “Manbird” likewise ponders a life away from the safety and comfort of the home nest. ‘Chicken’ is another double entendre melding “fear” and birds, with Ant’s lazy twang guitars sliced in half by Don Hawkins’ blistering Neil Young impersonation. ‘Featherweight” is Ant-Goes-Punk as he revisits his Dead Kennedys, Black Flag, Millions of Dead Cops teenaged years. They didn’t last long and, thankfully neither does this at 1:46; about one minute too long for me. ‘Beak’ is an electronic krautrockin’ groover with a dozen or so friends repeating the title. It’s rather hypnotic in a Giorgio Moroder/Midnight Express sort of way. ‘Nest Out Of Feathers’ drops a number of autobiographical Kodak© moments into a jolly jaunt along vibe – like, who doesn’t go all ga-ga when they meet their heroes (New York Yankees superstars Bucky Dent and Reggie Jackson at the Las Vegas airport in Ant’s case.

It’s a fact of life that death must frequently rear its ugly head, so no autobiographical concept album would be complete without sharing the loss of a loved one, and ‘Oh Dainty Beak’ is a lovely, somber tribute to the death of Ant’s best friend of 31 years. Disk One ends with ‘And So Flies The Crow’, a visit to the disco, Talking Heads style, with references to Zappa and Dance Fever along for the ride.

Disk two opens on a positive note as our intrepid explorer is ‘Coming Home’ and he plays all the instruments as is the case on about half the tunes here. Perhaps this solitary “Antness” represents the emptiness and loneliness of experiencing the world on your own, away from the nest and family, friends, et. al. Or perhaps his reflection on the solitary confinement we’ve all been forced into. I also think it may suggest that all musicians are ultimately solely responsible for what they release into the public, no matter how many helpers contribute to the album, the artists has the final veto power. ‘Don’t Knock The Mockingbird’ surveys Ant’s 5 a.m. alarm clock that sits in for his own trans-Atlantic travels from California to Berlin, filing a daily scavenger report “judging hair and fashion sense and keeping tabs on who’s screwing whom”. Good to know these things that may find their way into your autobiographical concept album!

‘Flying On The Ground Is Alright’ is a tongue-in-cheek tossaway that contradicts Neil Young’s philosophy and ‘My Other Life’ investigates the multiple personalities that live inside all of us. Which one shall I wear today for the world to share? We’ve all grown up with nursery rhymes to help explain the mysteries of the universe; ‘Underneath The Mushroom Tree” is Ant’s, and “Pimpimpimpim” is the secret password that reveals all. ‘Dreamscape 4’ is a little disjointed (as dreams usually are) and is part lullaby ditty and part electronic buzz, all to introduce the occasional hallucinatory visions that find their way into a song and help the composer “see” the music, even if he can’t hear it enough to accurately transpose it onto tape.

‘Even The Swans Are Dirty’ is a mini-travelogue through Berlin’s Maybachufer district, navigating through hipster fanny packs, filthy cappuccino foam, junkies, burned-out Mercedes, broken bottles, graffiti…. Any similarity to the dark and frightening musical concoctions of Michael Gira is probably a coincidence. I think! The erotic atmospherics and “thud and crash” of Morris Windsor’s on ‘Beak 2’ serve as a wake-up call to prepare us for the final descent into…Madness? Freedom? Ecstasy? Hold on, it’s gonna be a bumpy ride, a little turbulence until we reach our final destination. ‘Birds Of North America’ is a titillating tale of topical temptations (literally) and perhaps a stab at nationalistic pride? It’s grounded in tits and robins and worms and cinnamon girls and flammulated owls (whatever they are) and races to the stars and competitions to control the universe, but while English “birds” might be nice, they’re no match for the American variety!

‘Back To The Egg’ sounds like a McCartney solo album, but here it is a swaying arms-akimbo tribute to, well, his other band, Wings, which is obviously appropriate in a concept album about birds and space travel. There’s even a line about “Wings Over Sweden” in case you need a little encouragement figuring it out. And Ant also says it’s about his rediscovered love of ABBA. All I can say is, “What took you so long”. The gauntlet has been thrown: The Beatles or ABBA? 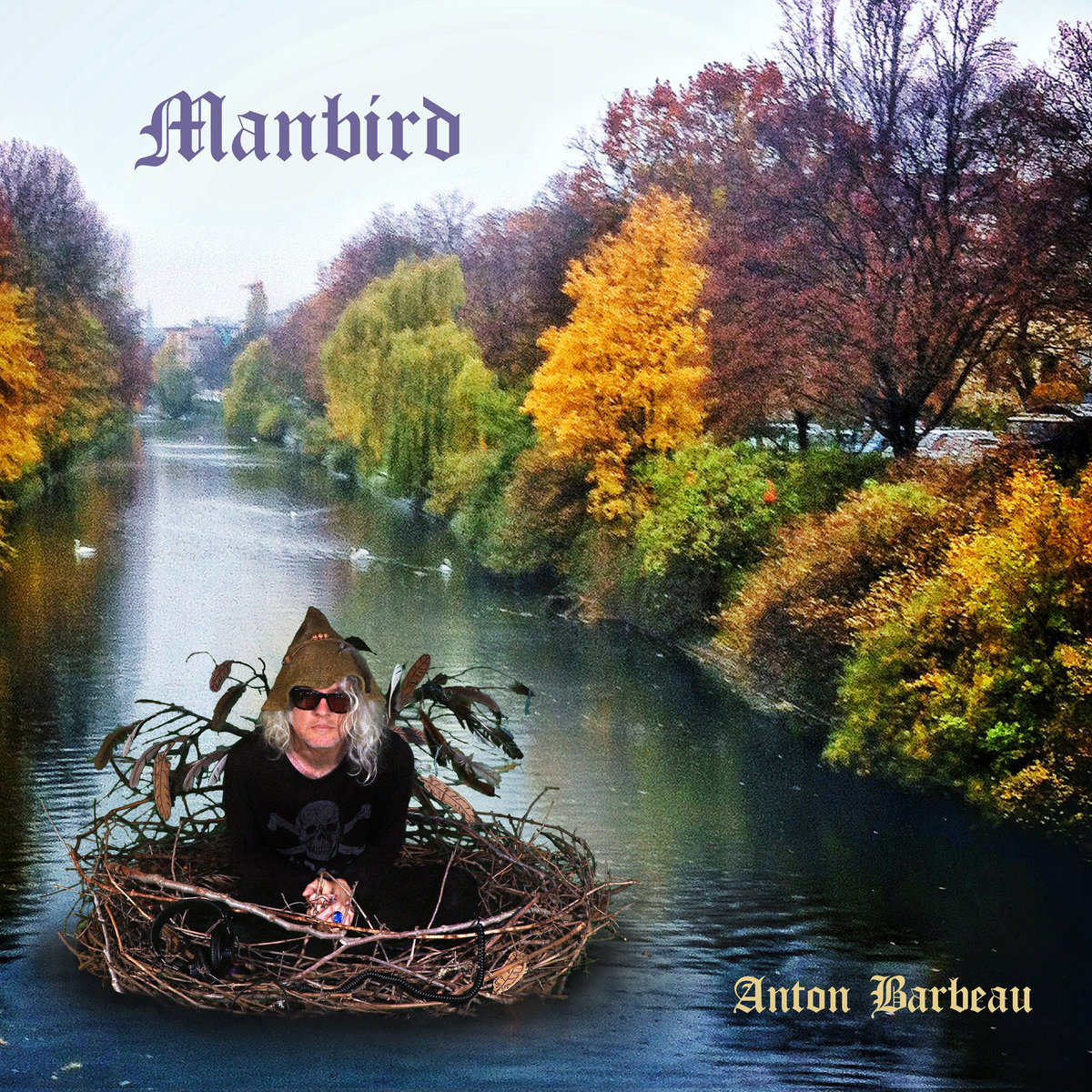 The final (titled) track, ‘Space Force’ may seem defeatist, as our hero decides, “Fuck it, Earth is not fit for human consumption, I need to leave the planet.” But it’s really about new beginnings/liftoffs, rather than final endings/landings. So it’s off to breakfast on Mars (to finally answer Bowie’s interrogatory), dancing with Spock and Kirk (and answering Spizz 80’s interrogatory), accompanied by a hefty bag of trips (mushrooms, a little “tea”, some cosmic potatoes, psilocybin in a tube), intergalactic laxatives, Mother Goose juice…. Say hello to Major Tom.

Manbird is an epic accomplishment, a long strange trip. Barbeau’s musical variety bounces across genres like light beaming off the third stone from the sun from a galaxy far, far away (psychedelia, prog, pop, avantwyrdfolk, electronic krautrock), but it all works because despite the distances travelled, there is no road LESS travelled, only a wide open universe of possibilities, musical, personal, spiritual, philosophical, political. It’s all in here if you are ready to crack the cosmic egg and unleash the awe and mystery of what it’s like Being Anton Barbeau.