One of the most influential funk/R&B bands of the late 1960’s and 1970’s, New Orleans’ The Meters released eight albums and twenty singles between 1968 and 1977. While the band may not have set the world on fire with record sales or topped the charts their catalog has become one of the most respected of the period and they are among the most sampled groups among top rap and hip-hop artists of the 1990’s and beyond. The group’s complete recordings have been compiled on Cherry Red’s SoulMusic Records imprint in a most impressive six disc, one hundred sixteen track box set.

The Meters’ first two single releases, ‘Sophisticated Cissy’ and ‘Cissy Strut’ both released in 1968 on the Josie label, turned out to be their biggest hits, reaching #7 and #4 on the R&B charts and crossing over to peak at #34 and #23 on Billboard’s pop charts. Both singles also appeared on the group’s debut s/t 1968 LP which did not fare so well, topping at #23 on the Billboard R&B charts, but only #106 on the Pop album charts. The tunes, however, have been mentioned by many bands of virtually every genre as great influences and incredibly enjoyable to play. The influence has been expressed by Florida garage/psychedelic rockers’ We The People’s lead guitarist Wayne Proctor, among others. The Meters’ debut also included their third single, ‘Ease Back’ which was another respectable seller, making #20 on the R&B and #61 on the Pop charts. The group’s follow up 1969 album ‘Look-Ka Py Py’ was equally successful on the R&B charts, reaching #23 but stalling at #198 on the Pop charts. The LP’s singles, however, were successes with the title track reaching #11 on the R&B charts and #56 on its Pop counterpart, although ‘Dry Spell’ peaked at #20 on the R&B listing while failing to make any impact on the Pop charts. The albums were not simply compilations of singles, however, as the group’s instrumental prowess shown throughout, comprised of guitarist Leo Nocentelli, bassist George Porter Jr., drummer Joseph ‘Zigaboo’ Modeliste and keyboardist/vocalist Art Neville. It was the quartet’s mastery of their instruments which had led to their discovery by legendary New Orleans singer/songwriter/producer Allen Toussant and his business partner Marshall Sehorn, who immediately offered the band work at their Sansu label, where the foursome became the studio musicians behind Sansu’s premier acts such as Lee Dorsey, Irma Thomas, Chris Kenner and Betty Harris. Sehorn became the band’s manager leading to their signing with Josie Records, who released The Meters’ first three long players.

Disc two is an expanded edition of 1970’s ‘Struttin’’ the band’s third and final album on the Josie label. The album, like its predecessors, is composed almost entirely of group original compositions, but there is a cover of Jimmy Webb’s ‘Wichita Lineman.’ Among the highlights of the album is an instrumental ‘Chicken Strut’ which like their first two singles is classic funk and topped out at #11 on the R&B charts, while attaining #50 as a crossover on the Pop charts. Another highlight is the infectious and aptly titled ‘Hand Clapping Song’ which hit #25 on the R&B charts, but failed to crossover. The fourteen tracks comprising ‘Struttin’ are supplemented by ten bonus tracks taken from single releases. Among these are the band’s final big hit, ‘A Message From The Meters’ which attained #21 on the R&B charts, and two near misses, ‘Stretch Your Rubber Band’ and ‘(The World Is A Bit Under The Weather) Double Oop’ which topped at #42 and #47 respectively on the R&B charts. The following year would find the band signing with a new label, Reprise, releasing a new album in 1972, ‘Cabbage Alley’ and changing the nature of their recordings from three minute, mainly instrumental, single oriented tunes to more extended songs showcasing the instrumental abilities of each band member and the recording of more covers, with The Meters adding their interpretations of well known contemporary tunes to their repertoire. 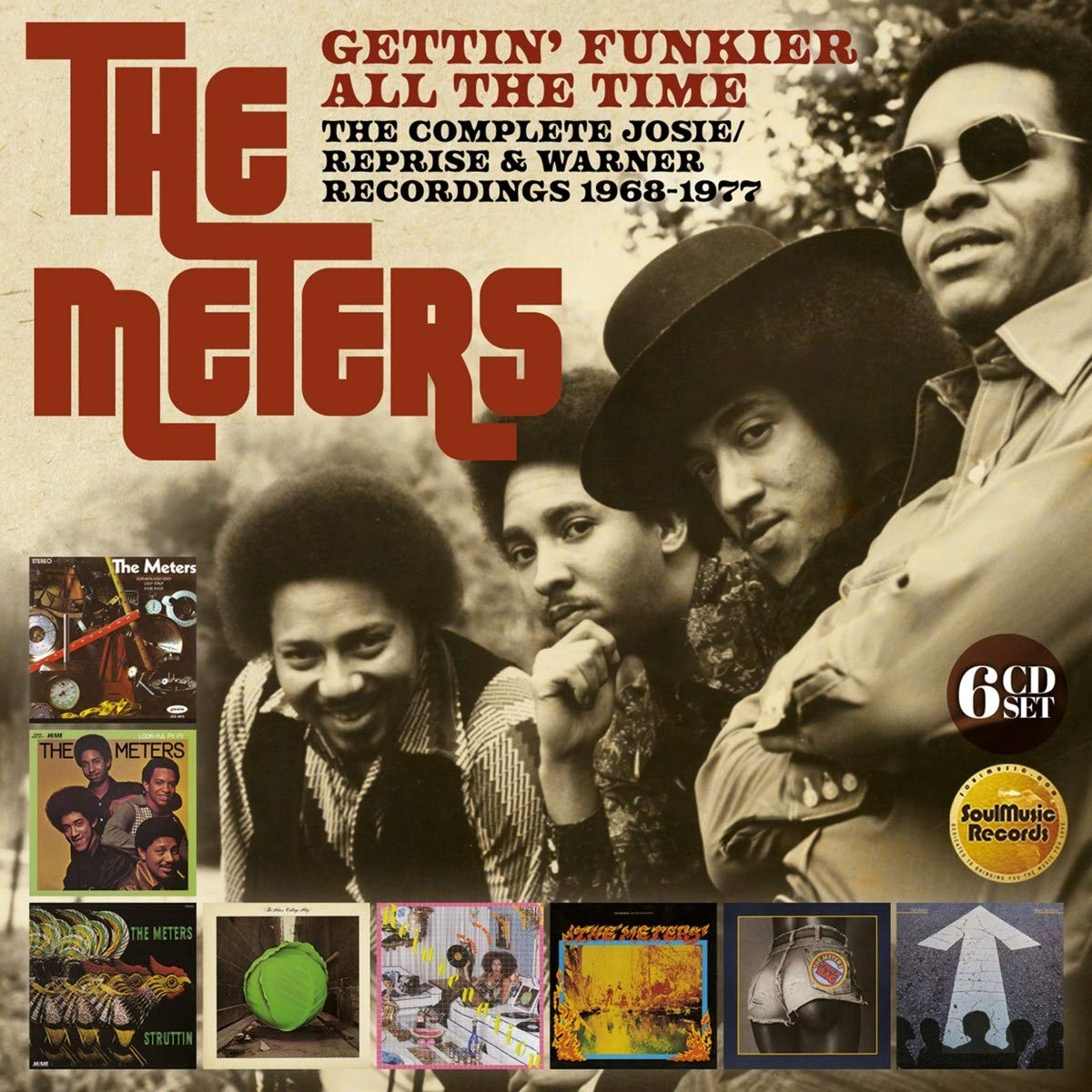 ‘Cabbage Alley marked a real change with the band stretching out on their tunes, exemplified by the LP’s opening two tunes ‘You’ve Got To Change (You’ve Got To Reform)’ and ‘Stay Away’ each surpassing five minutes in running time. Additionally, the third tune was a cover of Neil Young’s ‘Birds’ a harbinger of things to come, as the group, encouraged by Art Neville, offered up their takes on songs of the day by popular artists. A couple of other tunes of note from the album are the title track, penned by Neville, and the group composed song from which this box set takes its name. Three singles were taken from ‘Cabbage Alley.’ Unfortunately, ‘Dig The Dirt’ ‘Cabbage Alley’ and ‘Chug Chug Chug A-Lug’ all failed to hit, and the LP peaked at #48 on the R&B charts, a large drop from ‘Struttin’’ which reached #32, a let down to both the band and Reprise. The label, however, was satisfied enough that 1974 saw the release of the band’s fifth LP ‘Rejuvenation.’ Disc three closes with the first six tracks from this second Reprise album. Among the highlights are the five minute plus ‘People Say’ which reached #52 when released, in edited form, as a single, and the funky ‘Hey Pockey A-Way’ which was a sizable hit, peaking at #31 on the Billboard R&B charts, in its edited single version. Unfortunately, in spite of the success of its singles, ‘Rejuvenation’ was the first LP by The Meters to not sell sufficiently to chart, a problem that would trouble the group for the remainder of their existence.

Disc four opens with The Meters’ magnum opus, the nearly twelve minute ‘It Ain’t No Use’ which gave each member of the band a chance to show their chops, especially guitarist Nocentelli, whose solos are absolute knockouts. While it may not have tickled the fancies of record buyers, music critics and fellow musicians were incredibly impressed by the performance, and it changed the way the band was viewed as well as altering future expectations of releases. 1975’s ‘Fire On The Bayou’ sold much better, reaching #41 in Billboard’s R&B charts, but sadly would be the last LP by The Meters to do so. The sole single taken from the album, ‘They All Asked For You’ sold poorly, as record sales increasingly became troublesome for both the band and its label. The LP had some real highlights however. The eight minute ‘Middle Of The Road’ again gave the band a chance to stretch out and strut their stuff. A fine cover of Russ Ballard’s ‘Liar’ a huge hit for Three Dog Night and an original take on Hank Williams’ ‘Jambalaya (On The Bayou)’ were standouts. The band also returned to their roots on ‘Mardi Gras Mambo’ and the LP title track. With the album sales in mind Reprise sent the band into the studio to record their 1976 followup ‘Trick Bag.’

Disc five centers around the 1976 album,their seventh, and the group’s last to appear on Reprise Records. The opening tune was an attempt to cash in on the then current rage in the music industry, disco. Largely due to Art Neville’s suggestion, the group recorded ‘Disco Is The Thing Today’ which did reach #87 on the charts, but was a real departure from the band’s roots and was not a favorite of the band members or the group’s loyal following. Much closer to the band’s normal sound was the title track, a cover of a tune written by Earl King. Also included was a cover of James Taylor’s ‘Suite For 20 G’ which fits much better than would be expected, given the special treatment only The Meters could offer. The disc is rounded out by several tracks recorded during the ‘Trick Bag’ sessions. Among these are a rather unusual, yet tasty medley pairing a cover of Dominic Frontiere’s theme from the Clint Eastwood movie ‘Hang ‘Em High’ with the Rolling Stones’ classic ‘Honky Tonk Women’ credited on the LP as ‘Honky Tonk Woman.’ Also on display are three takes on tunes by well known artists given original and more than competent performances by the band: ‘Love The One You’re With’ a Stephen Stills tune, The Beatles’ ‘Come Together’ and an incredible nine minute take on Neil Young’s ‘Down By The River’ on which guitarist Leo Nocentelli gives his guitar a most impressive workout, his solos especially standouts.

Disc six centers around the band’s eighth, and final, LP ‘New Directions’ this time released on Warner Brothers Records, which Reprise is a subsidiary of. The album is a return to their earlier form, with tunes such as ‘No More Okey Doke’ and ‘Funkify Your Life.’ However, despite the quality of the material found on the album it failed to sell, and the lone single lifted from it ‘Be My Lady’ stalled at #78 on the R&B chart, although it did crossover and attain the same position on the Pop chart. Unfortunately, the group was beset by money problems and left without a record contract once they were released by Warner’s. How a band could record and release such a large, high quality catalog yet fail to attain sales figures approaching those of contemporaries such as Booker T & The MG’s to whom The Meters are often compared, is absolutely baffling. One listen to ‘Gettin’ Funkier All The Time’ will drive this point home. The set is closed out with four single edits from the Reprise years and an extended disco mix of ‘Disco Is The Thing Today.’

‘Gettin’ Funkier All The Time’ contains absolutely every tune released by the band throughout their 1968-1977 lifespan, six discs, one hundred sixteen tracks total, with a runtime of approximately seven hours. The set comes in a clamshell box, each disc housed in its own cardboard replica LP sleeve and includes a full color, forty page booklet with complete track annotations, photos of the band, album artwork and memorabilia as well as an informative essay by Charles Waring, a contributor to MOJO and Record Collector magazines. The band has never sounded so good, thanks to the remastering job by Nick Robbins. This box set will appeal to all fans of funk and soul music, and beyond that to fans of all those influenced by The Meters, including fans of 1970’s rock music. Absolutely the last word on all things The Meters, the collection comes most highly recommended.

The Meters – Gettin’ Funkier All The Time (SoulMusic Records, 2020)