“Drift away to the point where you have no more expectations”

What kind of record did you want to make with Geistermusig?

Caroline Profanter: I did a concert at Ateliers Claus in the SMOG concert series 2 years ago and developed a new piece for that evening. My initial idea was to create a kind of excursion on a “magic carpet”, overflying landscapes, and crossing spaces and time frames. Two years after my studies in acousmatic composition, which were very focused, it gave me the freedom I wanted: the wish to divert. To use total diverse soundscape recordings, of different places, and mostly concentrating on the sonic characteristics to find the connecting points (melting points), without focusing so much on the images and references they trigger (provoke). What I wanted is to create a kind of spaceship in which you travel with the sounds and also get an immersive experience. Where you, as a listener, are part of the scenario. For that I had a quadraphonic setup, 4 speakers surrounding the audience, and several resonating objects distributed in space. They were additional sources, like fountains and influenced the character of the sound, due to their material (wood, metal). After that concert I got a lot of positive feedback, and I was offered to record the set in the studio, with Christophe Albertijn, the great sound engineer of Ateliers Claus. We recreated the same setup with 4 loudspeakers and the objects, and recorded the piece on several tracks. We recorded it twice, and chose one, without any editing, only mixing between the different tracks, in order to to keep the spatial imprint of the live moment. It became the first piece on the record that I named “meanwhile elsewhere”.

The second piece developed in the same way. It was first created for a live set, and then recorded in the studio, with a quadraphonic setup, and several instruments.

I wanted the live aspect to be present in both pieces, with unforeseen incidents and coincidences. As I like imperfections in the recorded sound itself, I also like the fragility of a concert situation. 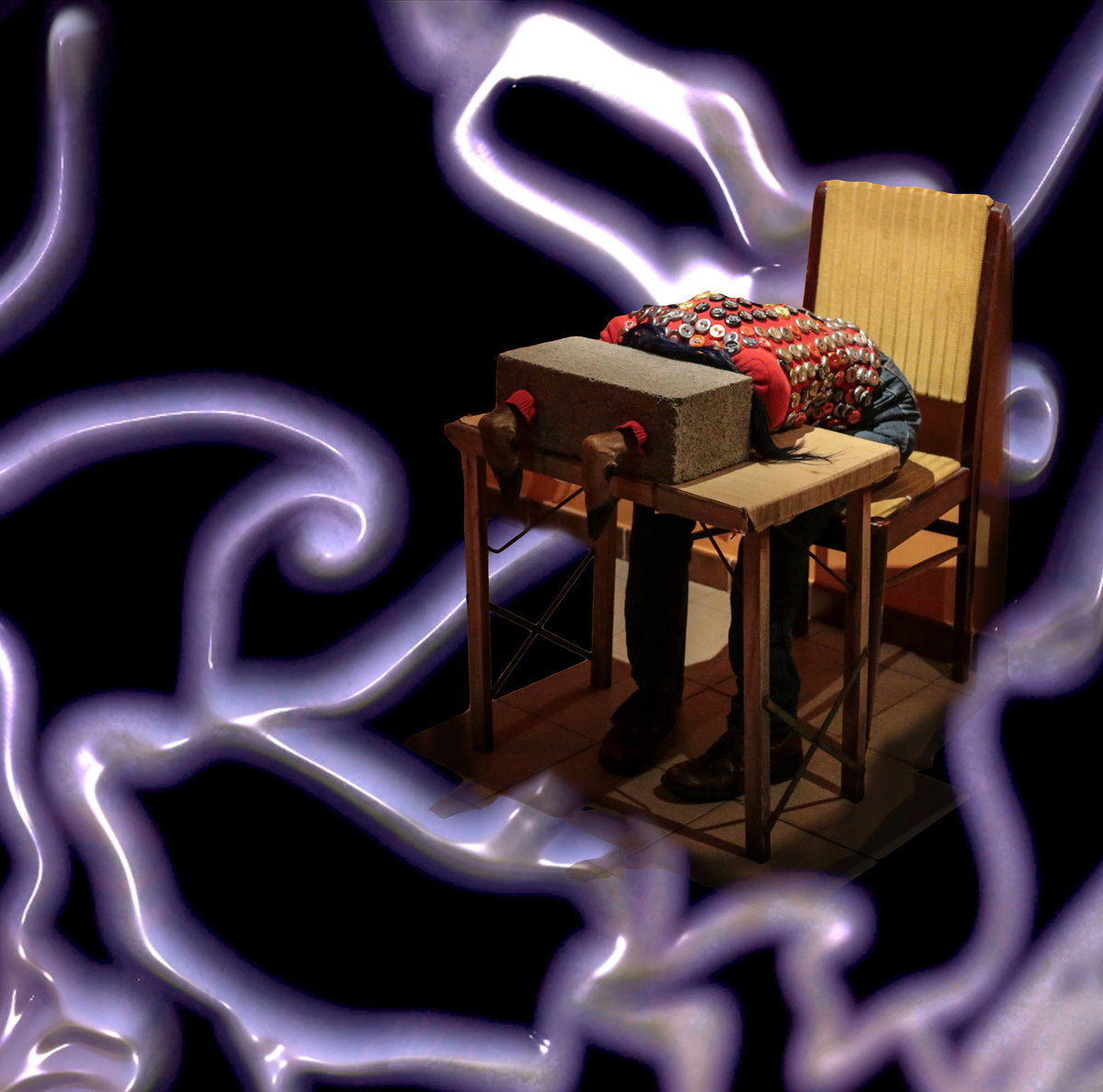 My 6-year-old niece listened to one of my concerts last Christmas, in Hotel Amazonas (Aspmayrhof), in South Tyrol. My sister asked her afterwards if she liked it, and she said it was like ‘Geistermusig’ (pronounced in dialect, the way we speak in the region of South Tyrol where I come from), which means ‘ghost music’. I really liked this image. It seemed a good description for this music. The recordings are also some kind of ghosts that float around like shadows in the space. They appear, and disappear, you don’t see anything, but you mostly feel them. The old ‘Stube’ (living room) at Hotel Amazonas, where the concert took place, was also a perfect environment, where there were probably real ghosts.

The second piece on the record, “Puntini Puntini”, was developed on the basis of that set.

“I wanted to create a kind of spaceship”

Why did you want to make an album that is made out of two long tracks? It sounds like each track exists out of a collage of several shorter pieces.

The length of the pieces is the result of the different sonic material that I chose to use for each piece, and that needed its time to develop. Somehow every recording I use is for me a kind of a short piece in itself. It has already a beginning and an end, and a development. It is like a musical phrase that defines a certain structure, and offers several possibilities in how to continue. Then it depends how much I transform the recorded sounds or how I combine and mix them, so that the piece becomes more and more abstract.

In the second piece “Puntini Puntini”, I also used field recordings, but they are implemented in more abstract drone passages, also using a bontempi wind organ, and a no-input-mixer. These vibrating and oscillating analogue sounds differ from the recorded ones, that are digitally reproduced. They create a base of tension for all other sonic actions.

I wanted both pieces to be on the edge of what is recognisable and what not. In the hope that you can drift away to the point where you have no more expectations, because everything is possible.

Is this how you made the record: collecting different kinds of recordings, and then editing them together into these two pieces, like a collage, like a sound art piece?

Yes, I collect a lot of recordings, and for these two tracks everything was possible. I had my pool of recordings. I prepared them in different categories, based on their sonic properties (texture/spectrum, granularity, morphology: iterative or continuous, densification/acceleration, etc), and adapted them to my spatial setup of different loudspeakers and objects. It becomes then somehow sculptural. The sound develops in the space and becomes more-dimensional, the listening experience is more immersive.

Both pieces were created in a site-specific way, in accordance with the space, where they were presented. Every context is different, and that influences the whole piece.

For the piece “Puntini Puntini” I also recorded sounds of the close environment of the old farm Aspmayrhof in South Tyrol, during a residency there.

Why do you use field recordings? And why do you like combining them with recordings of your own? Do you think a field recorder is still a musician, or ‘just’ a recorder, an observer?

When I record sounds that already exist in the environment I see myself as a capturer of a particular moment that will never reproduce itself in the same way, like a photographer. But I already hear something musical in it, and maybe already imagine how to orchestrate it. It is probably a bit of a cinematographic imagination. When I produce myself the sounds with any object or instrument, I define already a musical structure myself, with my gestures and the way how I play. This is then implemented in the bigger form. I try not to hierarchies the sounds, not to make the difference between what is pure soundscape and what is not. Recordings are constantly transformed. Already by playing them through a specific loudspeaker they change their color. Most of the recordings I have are not pure nature soundscape recordings. There is always already an intervention of some kind, something mechanical, industrial or electrical in the background. I like all the imperfections and interference’s that recorded sounds have. You can find infinite details in it, and that is what fascinates me. All the recordings are my own recordings. Some are taken from the environment, some are produced in the environment. It is somehow like film-making, between documentary and fiction.