A few hours before their incredible live set at Mohawk, I met up with Stephen McBean (lead vocals/guitar) and Adam Bulgasem (drums) of the psychedelic rock band Black Mountain to talk about their latest album, new band members, touring, and the future of the band.

Your latest album, Destroyer, sounds great! It’s the heaviest sounding of all of your albums so far. Any specific factors that led to this increase in heaviness as opposed to being more folky-psychedelic on the previous albums?

Stephen: It would just be a combination of the chemistry of the people playing on the record – some new members. I guess a bit of the material, and we recorded a lot of songs so we just gravitated towards the heavier ones this time. It seemed like the heavier ones were a little bit more special than the folkier ones this time. A combination of humans, and machines, and electricity happening at once and a little bit heavier.

I also really enjoyed the video for “Licensed to Drive”! Great combination of Atari imagery and live action. Was the idea for the video your own concept?

Stephen: That was the director, Zev Deans, he I guess submitted for a video and I’m not really a fan of videos but I liked his idea and we did a bunch of green screen and I didn’t know what he was going to do and he sent me the first cut and I was like “oh wow, that’s great. I don’t even have any comments – it just looks cool.” Usually there is like… I don’t think anyone likes looking at themselves on screen… except maybe porn stars. (haha) Yeah, I don’t know. It was fun. It was easy. A bunch of our friends got to together and brought all the props in and everything. It was pretty painless. Which always was nice because sometimes it can be pretty painful with a camera in your face.

Adam: Yeah, it was definitely good energy all day.

Is that your car you are driving in the video?

Stephen: That’s my friend Brooke’s car. Her motorcycles. I believe it was her Mercyful Fate shirt?

Stephen: The trashcans were mine.

Oh, right. You (Adam) were on top of the car playing the trashcans in a crop top t-shirt.

Adam: Yeah, that was fun! It was an intense shoot. The gauntlets I was wearing while I was playing were digging into my wrists, so I had these giant blisters. It was worth it!

Adam: There was some blood. The spikes were scraping up my sides since I was wearing a crop top. No pain, no gain.

I read that Stephen is restoring a Dodge Destroyer. Is that an actual car or are you just fucking with us?

It should be a car if not.

Stephen: I’m working on something but let’s keep that under wraps until it is unleashed on the streets.

Stephen: Yeah, that’s definitely true. I managed to live in Los Angeles for seven years without driving. Even pre-Uber and stuff. I had my bicycle and I would ride around. I finally got a kick in the butt to get my license. I had it before but I never actually tried driving. And then when I did start driving it opened up another portal to experiencing music that I had never experienced before. So, that was pretty cool. I spent many hours in vans riding shotgun, flipping tapes, and making playlists but it definitely like, and especially when you are driving alone, and just put on an album and yeah… that probably had a lot to do with the more heavy metal aspects of the album. I heard certain albums by Judas Priest or Slayer for the first time driving and it was pretty exhilarating. When you are making a playlist you just kind of go for the go-to numbers but there are all these deep-cuts that you sometimes forget about. And you can listen to the Wall in it’s entirety which is cool.

You staying out of trouble driving so far?

Stephen: Yeah, I got pulled over once but I didn’t get a ticket.

Stephen: Yeah, we were up in… somewhere in Northern California on a camping trip and it was that thing driving up into the mountains. It was funny because I had just said, “what is the speed limit? I don’t see a sign.” But he let me off the hook which was cool.

What’s your favorite food to eat while driving?

Stephen: I have eaten microwavable Kraft dinner while driving. Gotta be a little careful. Especially with microwave foods. It can get a little scalding.

So, you microwaved it and then hopped in the car?

Stephen: Well, it was in the RV so Jeremy (Schmidt) made me the little tour packet of Kraft dinner and set me up to drive. I mean, I think if I was driving when I was a teenager, I would have been a little bit more rambunctious behind the wheel. But now I’ve experienced good and bad drivers and watched their tricks and know what they are doing like people that drive with one knee. I’m like “okay, I’m not going to do that” and other ones that have two hands on the wheel. So, I don’t text or Tinder while I’m driving. 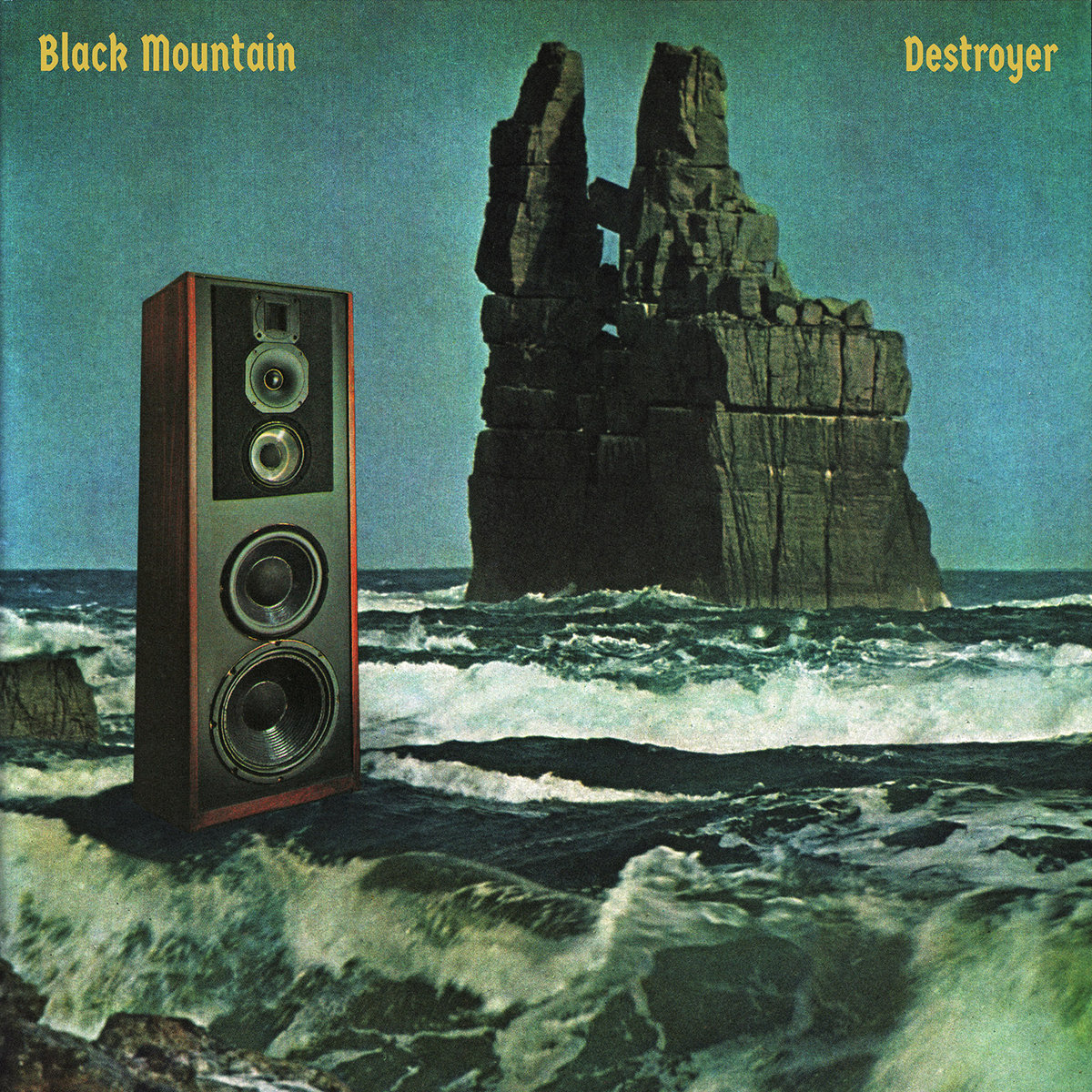 (haha) That’s good! You guys recorded 22 songs and picked out 8 of them for Destroyer. Will there be a Destroyer part 2?

Stephen: Well, we released one of those songs as a single about a month ago, “What’s Your Conquest”. We will probably work on some other ones or re-do some when the next album cycle starts.

Are you going to play any of those other songs in your live performance tonight or stick with what’s on the albums for the most part?

Stephen: For now, we are just going to stick with the… how many albums do we have now? Five?

Stephen: So, yeah, not to sound pompous but we are a band that is blessed with having a handful of good numbers. So, it’s nice to pull from each record and keep certain fans… it keeps the self-titled only fans happy and the people who have discovered us through the new record. The Spotifys and all that. Yeah, kinda like a ‘greatest hits’ each night.

How long will you guys be in Austin?

Stephen: We’ve been here for three days but are we leaving tomorrow?

Adam: Yeah, to drive to Nashville. A long-ass drive.

Stephen: I usually stay most of Psych Fest or Levitation but gotta get on the road and get that gas money.

Any bands you will be seeing tonight or that you saw last night?

Stephen: I saw Angel Olsen last night. I saw a bit of Power Trip. I might go check out Mercury Rev. Definitely see Stonefield and Kikagaku Moyo. We are playing with them tonight and we played with them in Switzerland.

Adam: I really wanted to catch Beak> tomorrow but we’ll be gone.

You guys seem to tour a lot. I know I’ve seen you in Austin as Black Mountain as well as Pink Mountaintops. Any crazy tour stories you’d be willing to share? Bonus points for drug references…

Stephen: I remember being on a tour where like… in probably 1999 we played in Austin, older band, and we played at the old Emo’s and we didn’t have anywhere to stay and we just parked the van and we had the windows down because it was so hot and I remember waking up to this hand reaching in trying to grab the garbage off the dash and we are like “hey!” and the hand didn’t flinch and I don’t know… A lot of the crazier ones are just a blur. We are pretty responsible now. Whenever we tour with Dead Meadow and stuff we get to live vicariously through their tour insanity.

You have toured with them quite a bit?

Stephen: Yeah, we toured Europe with them and the US a bunch of times and some of them were in Pink Mountaintops in some incarnations of that.

What’s next for Black Mountain? You are finishing up this tour and then what?

Stephen: I don’t know. Then we’ll just look at the next calendar year and go through the rolodex and see who wants to do a show and probably start thinking about a next record. The usual.

That’s pretty much all I have for you. Any last words for our readers?

Keep it weird. Excellent. Well, thanks a lot for taking some time with me. Great to meet you guys! Big fan of yours!