Many bands cover a song on an album, yet here on Spirit Of The Golden Juice, Quilt manger to cover the entire obscure album laid down in 1969 by F.J. McMahon, freshly back from his tours in Viet Nam and Thailand.

During those late heady nights at the end of the psychedelic 60’s, returning vet McMahon took a polaroid snapshot of that stoned technicolor generation who were riding a headlong wave into oblivion. The album engages in the perils of war, along with the heavy emotional tax that comes with it, a tax that will continually unfold for years into the future, while attempting to bring to light the dissociative aspects of feeling that one exists in two worlds at once. 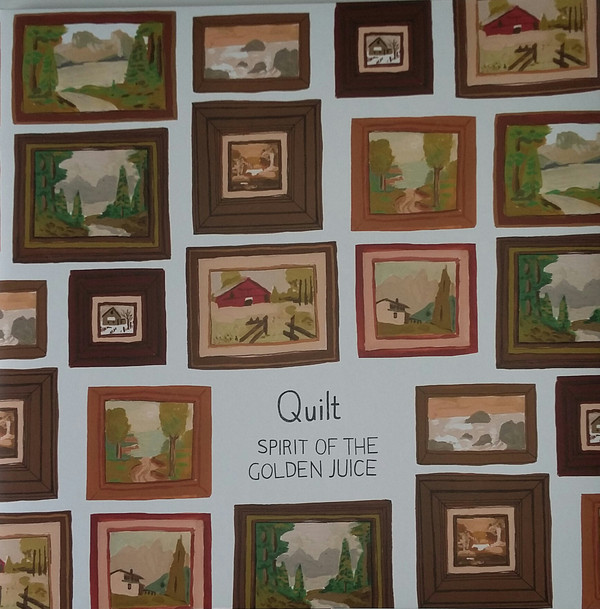 What Quilt mange to do is to bring this lost bit of lo-fi imagery into the here and now, filling the songs with an organic atmosphere, giving the music a slightly alternative take, yet when a number such as “Black Night Woman” ebbs from your speakers, it’s impossible not to be delightfully reminded of the laid back smooth textures that the Velvet Underground were capable of delivering. While most of F.J.’s songs were rather short, Quilt revitalize many, where on “Enough It Is Done,” Quilt extend the song to nearly eight minutes, turning a rather upbeat number into an intoxicatingly haunting etherial manifestation, creating a mystic bridge between the world of folk-rock and alternative psych. That being said, if you know McMahon’s work, you’ll instantly recognize what you’re hearing on this album, though it doesn’t matter if you don’t, because the experience is well worth your time and will hopefully inspire you to seek out the source material.

*** The Fun Facts: If you were in country (Viet Nam) during the 60’s and 70’s, you’ll remember that ‘Golden Juice’ was I.W. Harper Bourbon, the fuel of the times, where when held to the light, it was elegantly golden in colour … I know, I remember.

The record is available on black, green, white and a green-white split vinyl with a total of 1000 copies.