Among the first wave of Merseybeat bands two stand above all others. One, The Beatles, went on to become arguably the most important band in rock and roll history. The only serious competitors they had in the UK, for at least a year or so, were The Searchers, a pop rock band who took their name from a John Wayne movie and released a string of singles that made them constants on the charts in UK, as well as often in the US. The band was, like another huge British band, The Kinks, on the Pye Records label from 1963-1967, releasing a total of five albums in addition to their many 45’s, all of which have been lovingly compiled on Cherry Red Records’ Grapefruit imprint. The resulting six disc box set ‘When You Walk In The Room’ contains all five LP’s in both their mono and stereo versions, as well as all the single a- and b-sides, EP cuts, some alternative versions and foreign language releases, a whopping total of 164 tracks spread across the discs, presented in the best audio quality ever. 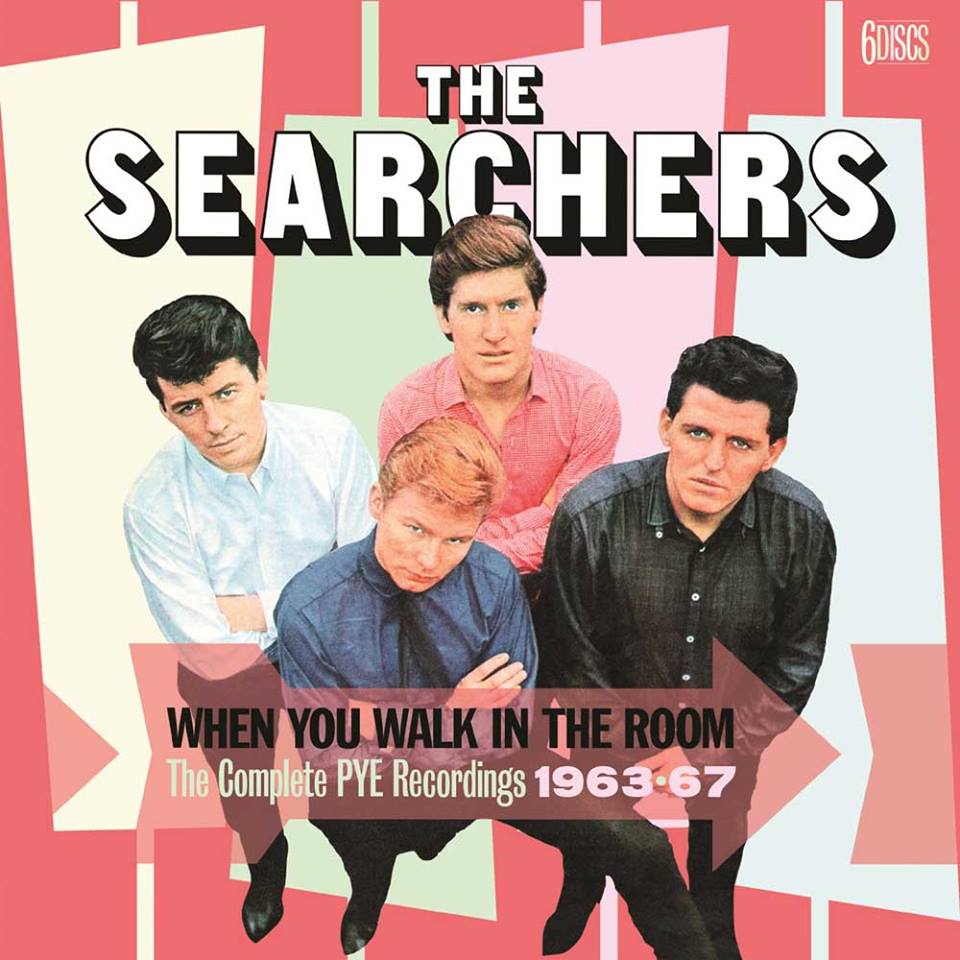 Settling on a lineup of John McNally and Mike Pender on guitars, Tony Jackson on bass and Chris Curtis on drums, with Jackson as the main vocalist, the band released its debut single ‘Sweets For My Sweet’ in 1963 with Jackson on lead vocals. The song reached #1 on the UK singles charts and was the beginning of an impressive run of hits by the band. The track was also included on the band’s first album ‘Meet The Searchers’ which serves as the basis for disc one of the box set, with the twelve tracks from the LP’s mono version joined by the ten songs which comprised its stereo release. The album also included ‘Love Potion Number Nine’ their cover of a song originally released by The Clovers. The song was only released as a single in the US, in 1964, where it was the band’s biggest hit, peaking at #3 on the Billboard charts. The remainder of ‘Meet The Searchers’ was composed of cover versions of hits of the day, such as Ben E. King’s ‘Stand By Me’ as well as Pete Seeger’s ‘Where Have All The Flowers Gone’ popularized by Peter, Paul and Mary, ‘Twist And Shout’ a Medley/Berns composition recorded by many artists including The Beatles, as was ‘Money (That’s What I Want)’ and ‘Da Doo Ron Ron’ a huge hit for The Crystals. Conspicuously absent are band originals, something that would not serve the band well, as music buyers came to expect artists to write their own material, a trend largely begun by The Beatles writing combination of John Lennon and Paul McCartney. However, ‘Meet The Searchers’ and the band’s early albums beat this expectation and the LP made #2 on the UK charts, the highest position attained by any of their albums. The disc is completed by three foreign language releases, two German and one French.

Disc two opens with the mono and stereo versions of the twelve tracks included on the group’s sophomore UK release ‘Sugar And Spice’ a #5 hit released in late 1963. The album’s title track reached #2 on the UK charts and was the first to make the US Billboard Hot 100 singles, barely missing the top 40, reaching #44, although it was a non-LP single in the US. While the album had no further hit singles it was again a big seller in the UK, reaching #5 on the charts. The LP is notable in that it contained the first band original, ‘Saints And Searchers’ credited to all four band members. The album’s eleven other tracks are all covers although, unlike their debut LP, they were not the hits of the day, but included tunes such as Leiber and Stoller’s ‘Some Other Guy.’. The band’s familiar vocal harmonies and jangling guitars make for an enjoyable listen and are evidence that the group had a good ear for selecting cover material. Among the six bonus tracks on disc two are the band’s cover of Chuck Berry’s ‘Bye Bye Johnny’ as well as the French and German language releases of ‘Sugar And Spice.’ 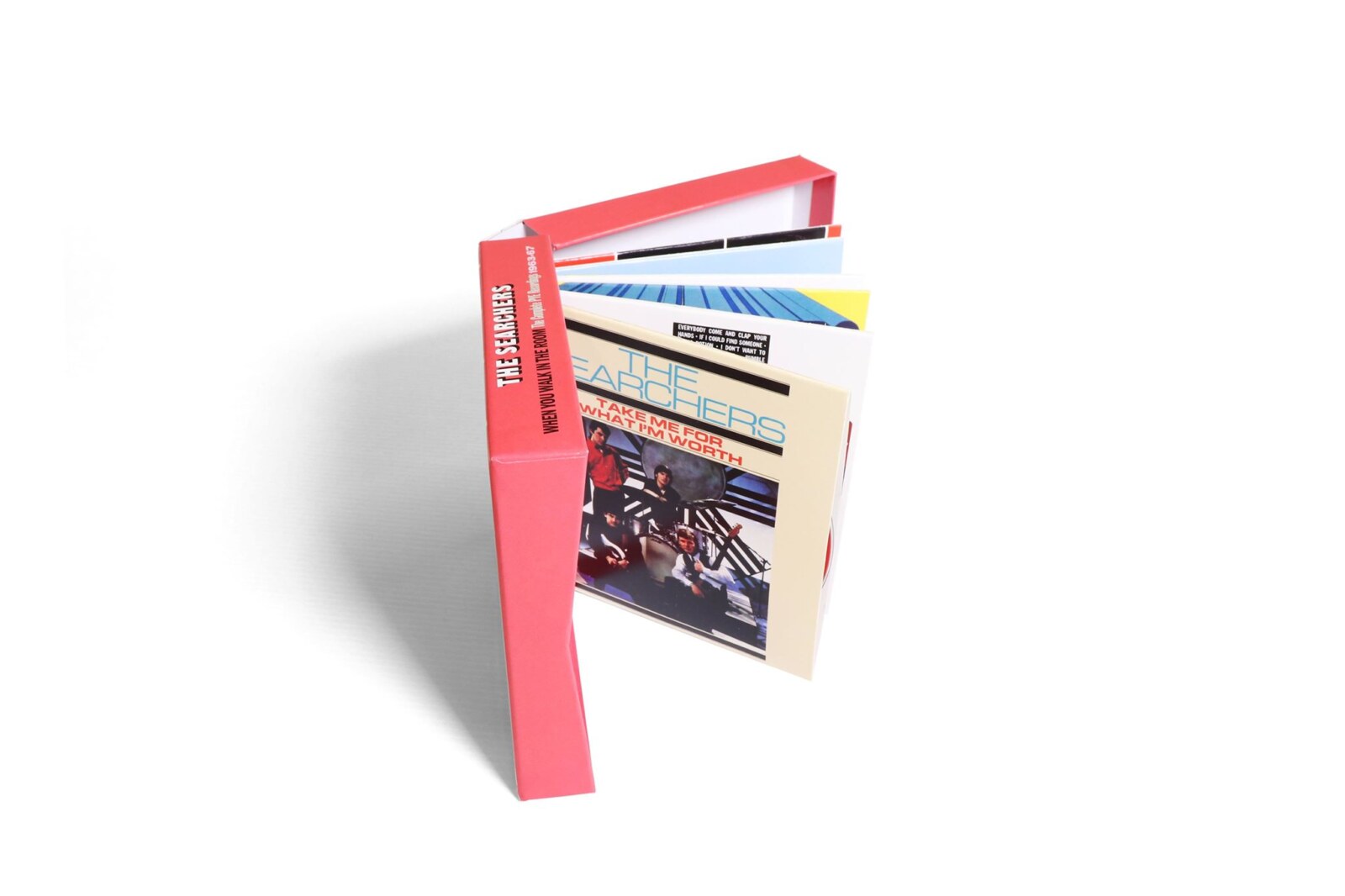 Disc three opens with ‘It’s The Searchers’ fourteen tracks, released in 1964, presented in mono and stereo. The album which reached #4 on the UK charts is highlighted by the band’s second and third #1 UK hit singles, ‘Needles And Pins’ probably the group’s best known song in the US where it reached #13 when released as a single, and ‘Don’t Throw Your Love Away’ which topped out at #16 in the US. Like its predecessors the album is filled out with cover tunes, again well chosen and spotlighting the band’s jangling guitars and gorgeous vocals, although by this time Jackson had been replaced by Mike Pender as the group’s main vocalist. Of special note is the band’s cover of ‘Don’t Throw Your Love Away’ originally recorded by The Orions. The disc is completed by two unreleased tracks, their takes on ‘I (Who Have Nothing)’ and ‘Shame, Shame, Shame’ as well as the German version of ‘Needles And Pins’ and the French version of ‘Don’t Throw Your Love Away.’

‘Sounds Like Searchers’ released in 1965 was the group’s last charting album, topping out at #8 in the UK. Among the LP’s tracks, ‘Bumble Bee’ which hit #21 on the US singles charts is perhaps the highlight, although it was not released on 45 in the UK. Also of note is their take on the well known ‘Let The Good Times Roll’ recorded by many artists over the years. The lack of a UK hit however, was a sign of things to come as the band’s inability to choose songs for single release was becoming apparent. This was at least partially due to the group’s assumption that no matter what they released it would sell in large numbers and in part to Pye’s inclination to release new product to strike while the iron was hot. That said, the band did have three sizable non-LP hits in the UK during this period, ‘What Have They Done To The Rain’ which made #13 in the UK and #29 in the US in the latter part of 1964, as well as ‘Goodbye My Love’ and ‘He’s Got No Love’ which made #4 and #12 in the UK upon release in 1965, although neither charted in the US. In addition, following ‘Needles And Pins’ bassist/lead vocalist Tony Jackson had become disenchanted with the group and was replaced by Frank Allen, whose debut was the non-LP hit and title track to this set ‘When You Walk In The Room.’ This change gave the new album a sound different from that which the group’s fans were familiar with, although it did sell well, but rather marked the end of an era of The Searchers as album sellers in the UK.

The Searchers’ final Pye LP ‘Take Me For What I’m Worth’ was released in late 1965 with the McNally, Pender, Allen and Curtis lineup. The album’s title track became the band’s final UK hit, reaching #20 upon release in late 1965. The albums twelve tracks appear, once again, in both mono and stereo versions. The album, however, did not fare as well as its predecessors, and did not chart in the UK. The LP includes two band originals, ‘It’s Time’ and ‘Don’t You Know Why’ which while worthy efforts, did not click with record buyers, as they were considerably removed from the sound of the cover tunes the band recorded in their heyday. The latter, in fact, was released as a single in the US, but sadly did not attract attention in stores or on AM airwaves. Things were not well within the band either, as drummer Curtis left the band not long after the release of ‘Take Me For What I’m Worth’ replaced by John Blunt, who would remain The Searchers’ drummer from May of 1966 through the end of their Pye years and beyond.

‘When You Walk In The Room’ is finished off with a full disc, 26 tracks, of non-LP single and EP tracks. Among them are some of the band’s biggest hits and best known songs. 1963’s “Someday We’re Gonna Love Again” made #11 in the UK, while reaching #34 in the US. The box set’s title track was a #3 UK smash which peaked at #35 in the US upon release in 1964. ‘What Have They Done To The Rain’ charted on both sides of the pond in 1964, reaching #13 in the UK and #29 in the US. The gorgeous ‘Goodbye My Love’ the band’s final hit from 1964 topped at #4 in the UK, but foundered at #52 in the US. Two 1965 UK hits ‘He’s Got No Love’ and ‘When I Get Home’ reached #12 and #35 respectively, while the group’s two last charting singles, both from 1966, the Jagger/Richard composition ‘Take It Or Leave It’ and their take on ‘Have You Ever Loved Somebody’ made #31 and #48 respectively on the UK singles charts. The disc, and box set close with the group’s final 1966 and 1967 efforts which range widely as the band tried in vain to once again find gold. Among the most interesting are a rocking take on the Five Americans’ 1967 hit ‘Western Union’ which shows a harder edged side of the band that is quite interesting, but was certainly not what record buyers expected from The Searchers and sank like a rock. The same fate met two further rock incuenced releases from 1967 ‘Second Hand Dealer’ and Popcorn Double Feature’ sealing the fate of the band, but giving the listener a hint as to the possibilities the band had as a rock, rather than pop rock, act. Sadly, as 1967 closed the band’s contract with Pye ran out and an era came to an end. But, what a hit filled era it had been, as the band amassed an impressive number of hits, albeit singles only in the US, whereas in the UK they sold many albums as well, and for good reason as evidenced by the contents of this release. 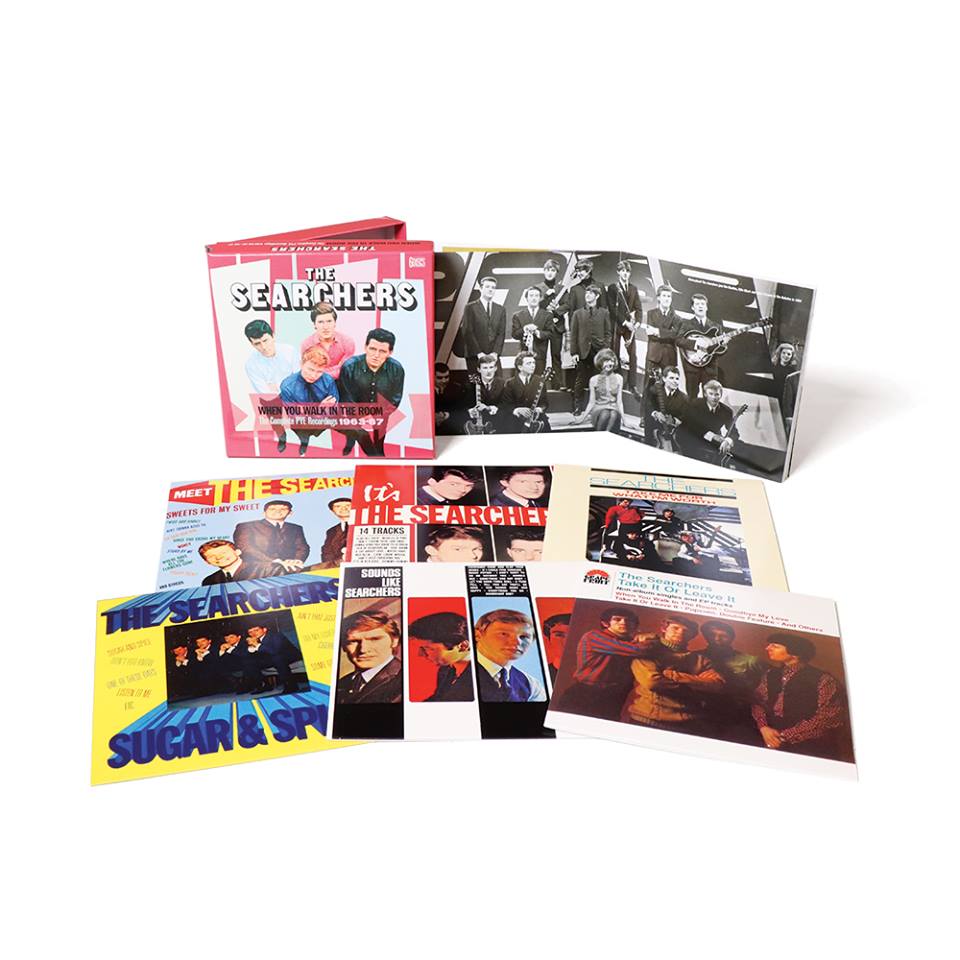 In their time at Pye, The Searchers had a most impressive track record. Four of their five UK LP’s made the Top 10, three reaching the Top 5. In the UK the band had three #1 singles, six hitting the Top 10, ten making the Top 20 and a total of twelve Top 40 hits. Although none of their albums made the Top 200 in the US, they did have one Top 5 tune, three Top 20, five Top 30 and seven Top 40 singles. ‘When You Walk In The Room: The Complete Pye Recordings 1963-1967’ includes exactly that, a whopping 164 tracks spread across the six discs which come housed in cardboard mini-LP sleeves snugly fit into a clamshell box along with a full color, 36 page booklet, that includes a complete track listing, many photos of the band, album and single art work and lots of other band memorabilia as well as an extensive essay by David Wells. A band which was active in the music business for well over 50 years before finally calling it a day earlier this year, all of The Searchers charting singles and albums were contained in the four year period covered by this incredible box set. It will be of great interest to fans of the first wave of British Invasion bands, 1960’s pop rock and Merseybeat groups as well as 1960’s rock in general and comes very highly recommended. Once again the good folks at Cherry Red Records, UK have amassed a comprehensive box set containing the complete works of a most important band during their seminal period.