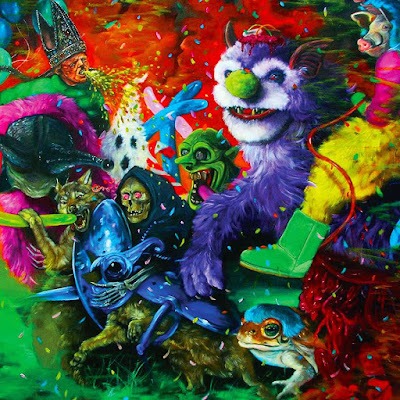 Tropical Fuck Storm – A Laughing Death in Meatspace (Joyful Noise Recordings, 2018)
https://tropicalfstorm.bandcamp.com/album/a-laughing-death-in-meatspace
It’s hard for a group with a name like Tropical Fuck Storm to not trigger a swarm of expectations for their listeners. But with their recent full-length release, A Laughing Death in Meatspace, the Australian group goes above and beyond all anticipations. Spanning 9 songs, the LP is full of monstrous catharsis that in many ways defies categorization while feeding a rock-centric hunger. With an affinity for noisy experimentation, shoegaze-y explosions, and math rock-esque songwriting, the group delivers some fringe sound that couldn’t be more delirious and delicious.
Cycling through the first few tracks, I get whiffs of Can, Destroyer, Frank Zappa, and even Death Grips. “Antimatter Animals” is haunted by the sheer dynamism of post-punk with vocals fit for concert hall crescendos. It’s with numbers like these that the group rides a fine line between atonal thumping and tangible melody, making the search for cohesion all the more satisfying. “The Future of History” may be a deal breaker for some with flavorful yet overwhelming dissonance. A complete disregard for tonality takes their sound closer to a kind of alt metal and electronic sound collaging. The outro is a percussive jungle of cracks, blips, and mangled effects, all amounting to tasteful chaos.
“Two Afternoons” is a darker taste of the what the Talking Heads would have been had David Byrne spent his adolescence trapped in a cave. The distortion and pounding drums remain in full swing with screeching guitar taking on the form of backing vocals. The tempo propels us toward some kind of occult ceremony with a sickly sweet chorus of female vocals. “Soft Power” hits us over the head with lyrics that evoke a confused chuckle: Yeah hold your fire man don’t shoot / Here comes the umpa-lumpa with the nukes. The irreverent gloom continues, taking on a gravity of its own. Compressed vocals echo throughout the chorus like a hellish curse. Call it noise rock or straight up punk, there is a violence to be found underneath the chords.
However, for an otherworldly aside, “Shellfish Toxin” takes us into the brothels of Atlantis: a perversely psychedelic soundtrack swimming in the ether. An electric guitar wobbles as a chorus of vocalists trudge along the horizon. The electronic mesh almost feels like an alternate take from Plantasia that never made it out of the studio. Onto the album’s title track and I’m pleasantly surprised—soft vocals and percussion lead us into the melody. I’m able to sit back and relax for at least a moment. The main male vocalist who has been leading us thus far shifts from soft to vehement croons. The tempo climbs like a funeral march before fading into a sweet void.
Half experimental rock release, half satanic electroacoustic ritual, A Laughing Death in Meatspace is as fun as it is dark. Their songwriting and instrumentation are confoundingly eclectic—to the point of intoxicating disorientation. It would be hard to truly pigeonhole the new release, so I won’t. All you need to know is that Tropical Fuck Storm lives up to their name. Almost too well. Give it a listen and dive into the abyss with us.
– Gabe Kahan
© Copyright http://www.psychedelicbabymag.com/2019
Gabe KahanReviewsTFSTropical Fuck Storm