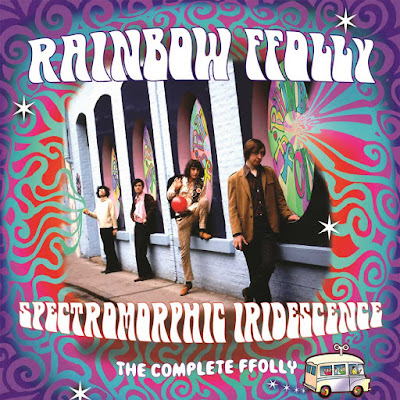 Rainbow Ffolly – Spectromorphic Iridescence: The Complete Ffolly (Grapefruit, 2019)
Among the many bands to have albums released by EMI in 1968 none may have had a stranger back story than Rainbow Ffolly, whose “Sallie Fforth” hit record shops the first week of May. EMI, home to The Beatles, among others, was one of the most respected labels of the day, with “The Beatles” better known as the “White Album” being perhaps the best known LP issued on the label that year. January, 2019, more than fifty years after its original release sees “Sallies Fforth” reissued on Cherry Red’s Grapefruit Records imprint as part of its three disc box set “Spectromorphic Iridescence” containing the complete works of Rainbow Fflolly. 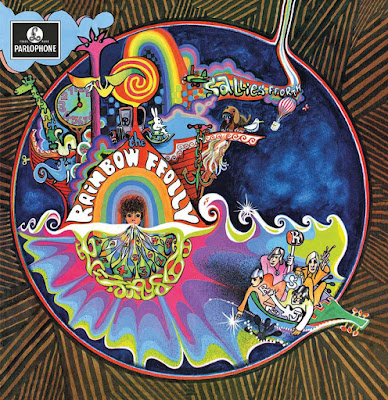 Disc two contains the mono version of “Sallies Fforth” as well as no less than twenty five bonus tracks, thirteen of which are radio jingles done for a hospital located near the home base of the band which opened just prior to the release of Rainbow Ffolly’s album. The radio jingles are short takes reworking famous tunes, the most creative and humorous of the lot being a redo of Louis Armstrong’s “What A Wonderful World” which in the hands of the band morphs into “What A Wonderful Ward” and is definitely good for a smile. The real highlights of the disc are seven home demos recorded throughout 1968 and five tunes recorded for the Dave Cash Show and Radio One Club in December, 1968, but were never aired and have remained unreleased until this box set. Ten of the twelve cuts are covers but serve as examples of what Rainbow Ffolly was capable of and what fans experienced seeing the band live. First up is an incendiary cover of Cream’s “Sunshine Of Your Love” with screaming lead guitar, booming bass and pounding drums. This track takes away any doubts one might have as to whether Rainbow Ffolly was capable of rocking. A take on The Beatles’ classic Sgt. Pepper track “Lucy In The Sky With Diamonds” is filled with trippy guitar and gorgeous vocal harmonies. In typical fashion the band could not help but mention other Beatles titles during the outro. A soulful pop rendition of “Gimme Some Kind Of Sign” a huge hit for Brook Benton appears as “Gimme Little Sign” with a spoken intro followed by another prime example of the lead and harmony vocals delivered so effortlessly by the band. “I Can’t Let Maggie Go” made popular by The Honeybus, gives the band a chance to show how nicely they could handle a ballad, and includes yet more incredible vocal harmonies. “Sabrosa” finds John Dunsterville in Chet Atkins mode once again as the band delivers a wonderful rendition of this energetic instrumental and features some delicate guitar picking. Pete Seeger’s “Bells Of Rhymney” a hit for The Byrds, another of the band’s major influences, is filled with jangling guitars and lovely vocal harmonies. The final home demo “Bonita” is another instrumental that the band runs through handling the lovely melody effortlessly and makes this listener wish Rainbow Ffolly had been afforded the opportunity to record more instrumentals as they seem to fit the band so well. The tunes recorded for radio broadcast begin with a cover of The Move’s “I Can Hear The Grass Grow” which the band handles with ease, showcasing John Dunsterville laying down some heavy rock guitar and the group reprising their vocal harmony abilities. The band’s cover of Eddie Cochran’s “Something Else” is short and sweet, the guitar and vocals again shining. Johnny Nash’s “Hold Me Tight” suits the band perfectly as they again disply the ease with which they could handle ballads, including this reggae style number. A partial take of the band original “I’m So Happy” is a crisp pop number. “She’s Alright” features jangling lead guitar and swirling vocals over the top of a heavier sounding rhythm section, a fine bit of pop rock. It’s truly a shame that record buyers were never afforded the chance to hear these radio recordings as they could have helped prolong the band’s life. 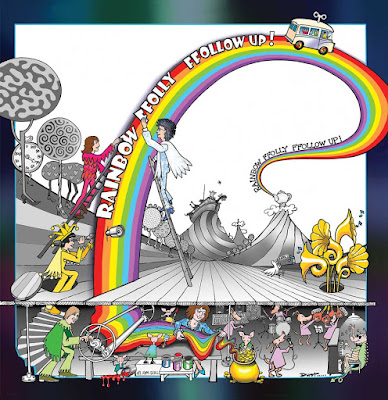