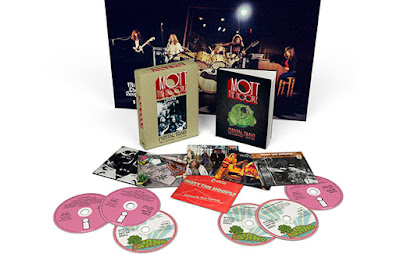 “Mental Train: The Island Years 1969-1971” comes in a lift lid box, with each of the six discs, nearly seven and a half hours of music, housed in their own cardboard mini-LP sleeves. A large poster of the band joins the 52 page full color hardback book which includes an extended essay by Kris Needs, track by track annotations, photos of the band, album artwork, posters, press clippings and other memorabilia. The box set was compiled by Mott The Hoople expert Campbell Devine with assistance from Kris Needs. The sound is immaculate, being mastered by Andy Pearce and Matt Wortham. “Mental Train” is the last word on Mott The Hoople’s years at Island Records and will appeal to those already familiar with the band as well as any fan of classic rock of the late 1960’s and early 1970’s. The set comes most highly recommended with the one caveat that the single version of “Midnight Lady” is not to be found here and it is unclear as to whether Universal will issue a replacement disc or not. The track is available elsewhere, but let the buyer be forewarned not to discard releases such as “The best Of The Island Years 1969-1972” which does indeed include the single version of the song.
– Kevin Rathert
© Copyright http://www.psychedelicbabymag.com/2019
Kevin RathertMott The HoopleReviews