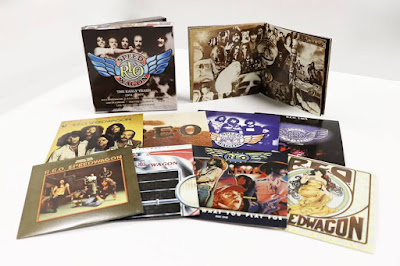 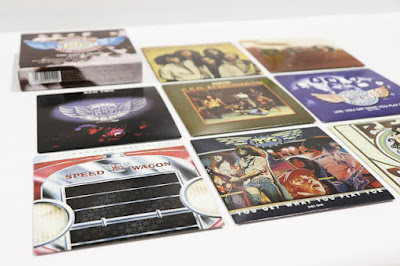 With Kevin Cronin back in the fold on lead vocals and rhythm guitar the groups recorded their 1976 LP titled simply “R.E.O.” an eight tune album, consisting of four tracks credited to Richrath, two to Cronin, and, in a first, two credited to Cronin and Richrath as a duo. While not as successful as its predecessors, attaining only #159 on the Billboard charts, the album is certainly a harbinger of things to come, containing heavier rock tunes filled with commercial hooks thanks to Cronin, and marking the evolution of the band’s sound to that of its most popular period, which followed soon. The LP’s opening track “Keep Pushin” although not successful as a single when released as such, along with Croni’s “”(I Believe) Our Time Is Gonna Come” contained the essence of the ballad influenced hard rock tunes that would make R.E.O. Speedwagon a best selling band, and a household name. “Breakaway” and “Lightning” co-credited to Cronin and Richrath showed that the two had overcome their musical differences and found a middle ground that would allow Richrath to display his guitar prowess while allowing Cronin to give the band a more commercially accessible sound. The album finds the band in better spirits than ever, and having found the musical middle ground that had previously escaped them. Richrath was given the freedom to express his unique talent on tunes such as “Flying Turkey Trot” while his flexibility is on display on “Any Kind Of Love” where he combines his electrifying guitar with the melodic influence of Kevin Cronin. “R.E.O.” is fleshed out by mono single and live takes of “Keep Pushin’.” The fruits of combining the rock ambitions of Richrath and the commercial influence of Cronin were put display on the band’s next release, 1977’s double live set “Live: You Get What You Play For” which not only proved their highest charting to date, topping at #72, but was on the charts for an extended period and set the stage for R.E.O. to find fame and fortune.
With the lineup of Cronin, Richrath, Doughty, Philbin and Gratzer back in place, R.E.O. returned to the road, the place they had always shown brightest and had become perhaps the best known opening act in America. The set’s opening tune, Richrath’s “Like You Do” a constant in their live shows since 1972 set the pace for eighty minutes of commercially accessible guitar rock and began one of the most highly respected of the live double LP phenomenon of the mid to late 1970’s. The set contained incredible run throughs of tunes from their 1971 debut in “Lay Me Down” and “157 Riverside Avenue” given new life with Cronin’s vocals and Richrath’s guitar work. “T.W.O.” fittingly provided the bulk of the material, from set opener Like You Do” to its closer “Golden Country” two Richrath compositions, as well as Cronin’s accessible and melodic “Being Kind (Can Hurt Someone Sometimes)” and “Music Man” and an inspired cover of Chuck Berry’s “Little Queenie.” A highlight of the set was their performance of the title track to their third album “Ridin’ The Storm Out” which is also represented by an extended take on “Son Of A Poor Man.” The then new, “R.E.O.” album is well represented by Cronin’s commercially appealing “Keep Pushin”” and “(I Believe) Our Time Is Gonna Come” as well as Richrath’s “Any Kind Of Love” and “Flying Turkey Trot.” A live track, never recorded in the studio, is “Gary’s Guitar Solo” whose title is rather self explanatory as guitarist Gary Richrath cuts loose on guitar in a nod to a similar tune performed by Leslie West during Mountain concerts of the day. The double album is an incredibly accurate documentation of a finely tuned rock band ready to make their move from “America’s best opening act” to the headlining hit makers that were to soon become. “Live: You Get What You Play For” marks the perfect ending for “The Early Years” of R.E.O. Speedwagon. One would be hard pressed to find a better live set from 1977 and certainly ends this comprehensive eight disc box set on a near perfect note. 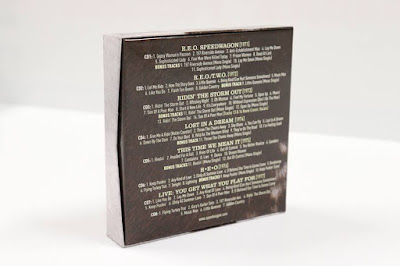 “The Early Years 1971-1977” comes in a clamshell box, complete with a full color forty page booklet containing an informative essay by Malcolm Dome, complete track listings and album credits as well as many photos of the band and album artwork. The music has never sounded better thanks to the mastering job of Tony Dixon at Masterpiece in London. The box set’s eighty two tracks include thirteen bonus tracks, ten mono single mixes, two tracks from “Ridin’ The Storm Out” with the original vocals by Kevin Cronin and a live take of “Keep Pushin”” making this indeed the definitive collection of R.E.O. Speedwagon’s early years. Many thanks to all at Cherry Red Records, UK for this wonderful collection. Fans of 1970’s rock and guitar driven rock in general will definitely want to add this box set to their collection.
– Kevin Rathert
© Copyright http://www.psychedelicbabymag.com/2018
Kevin RathertREO SpeedwagonReviews