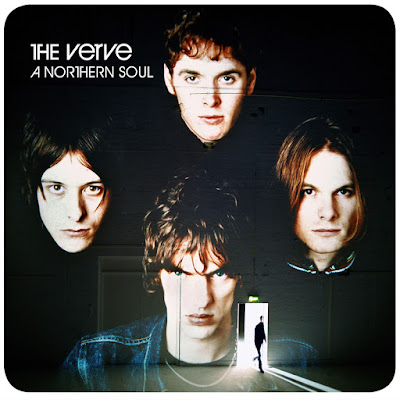 You know, it must have been awfully difficult for The Verve to be one of the greatest bands roaming the planet, yet not be able to enjoy it, as The Verve were constantly breaking up, or on the verge of so doing, with the door on the cover art suggest that someone was either on their way out, or hat in hand, walking back in, hoping that the other members will understand.
If one were to consider that A Storm In Heaven was their psychedelic opus, and very worthy to be gotten as a re-issue on 180 gram vinyl, then A Northern Soul had a foot both in their psychedelic debut, and one in Urban Hymns, their more rock presentation. Certainly A Northern Soul comes off as a bit more polished and focused, yet in the same breath, it contains very fragile elements, and why shouldn’t it, the songs sound like they barely hang together, as if they and the band could evaporate at any moment. Yet with that in mind, it’s that fragility that is so inviting and explorative.
Reportedly, the song “A Northern Soul” was written as a response to Noel Gallagher (of Oasis, who The Verve had been touring with) dedicating his song “Cast No Shadow” to Richard Ashcroft, forming an eternal bond between the two. That being said, without a doubt “History” is the most brilliant song on the album, a song that opens the record up like a flower destined to bloom only at night, and should have ushered The Verve to the top of the charts, yet the song, like the entire album, is confession by fire, with majestic lines wonderfully sung such as “I got to tell the tale of how I loved and failed,” followed by “I’ve got a skin full of dope” … all of which kept this radically intense record from becoming the emancipated psychedelic hit it should have been, leaving the band to forever exist on the brink of being all that they should have been.
There are many reasons for the fractured-ness of the band, and hence the music. First, copyrights to the name The Verve, or simply Verve, had come to a head, then Ashcroft was hospitalized after far to many drugs and drink, with the band regrouping in a remote Welsh studio, where the lads had only each other to face and deal with, unable to define the task at hand.
The cover art was created by Brian Cannon, picturing a man emerging from a small doorway with a projection of a bigger than life Verve emphasizing the hugeness of the more traditional rock music they were hearing from within. The session recordings began with an over the top two week ecstasy party, but subsequently became intensely strained with Richard Ashcroft disappearing for weeks at a time, along with drug and alcohol issues isolating various other band members so much that Owen Morris smashed a studio window after recording “History” out of sheer frustration. On “History,” Liam Gallagher does the handclaps, and having him around was probably like having Keith Richards around during his hazed days. According to Ashcroft, the album was a concept of sorts, with each song taking on a different characteristic of the attributes that make up a northern soul, ranging from arrogance to pain and elation … very much in the fashion of the life they were living.
Probably the most prophetic aspect was in the liner notes for the song “History,” bearing the cryptic message “All farewells should be sudden …” A mere three months after the album’s release Ashcroft split the band, only to reform it yet again a few weeks later without guitarist Nick McCabe.  A plan was devised to work with Suede’s Bernard Butler fell apart within a fortnight and Simon Tong stepped in to replace McCabe, even staying in the band when McCabe returned in 1997 to record The Verve’s classic album Urban Hymns.
Any you know what? In spite of all this, or perhaps because of it, The Verve created an album that will be, and should be remembered for all time, because it’s simply that good.
– Jenell Kesler
© Copyright http://www.psychedelicbabymag.com/2018
From The VaultJenell KeslerReviewsThe Verve