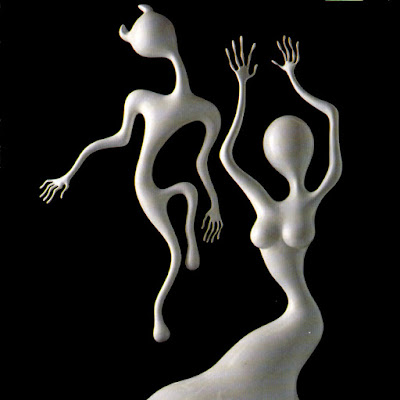 There are those living on the dark side of the moon who are gonna claim that Lazer Guided Melodies is far superior than anything materialized by Spacemen 3 and have obviously not considered All That Noise by The Darkside. And while this may be debatable, let me take the easy way out and say, ”Why shouldn’t it be better? Lessons were learned, stratospheres were explored, and like any good drug, once one knows the limitations, developing a more rich body of work while expanding on familiar concepts is exactly what an artist is supposed to do.”
At the time of its release, Lazer Guided Melodies with its stunning sustained fuzzed out guitars, and draped in a feedback of white noise atmospheres, it quickly got dropped into the new Shoegazer genre … though with its drifting synth-laden washes and laid back temperature, it instantly became a stepping stone that sonically connected both the Psychedelic and Space Rock genres, along with the wasted attitudes and vibes of The Velvet Underground, creating an exploratory doorway into the world of pure fine-tuned industry grade pharmaceuticals. On this outing there were no questions about where the drugs were going to take the music, unlike the days of heady LSD and questionable methamphetamines, Jason’s adventures are calculated, precise and repeatable, giving the listener a comfortable familiar warm space to drift off and escape to.
Jason Pierce has achieved this sonic wonder through a structure of repetitive melodies onto which he lays delightful turns and changes in tempo without getting edgy or causing the listener to do more than smile with eyes half closed at the blissed sexual softness surrounding them. I fully realize that I seem to be touting the virtues of drugs and all that encompasses them and perhaps I am, though one could easily point to the lives of both Sonic Boom [Pete Kember] and Spaceman [Jason Pierce] and make the argument that the music was a direct outcropping of their pharmaceutical forays.
In the fashion of other concept albums, Lazer Guided Melodies has been divided into a series of four mini-symphonies … each conveniently suited for an album side. There’s a bit of experimentation, but for the most part this symphonic flight is light and airy, creating a new super highway on which to place Ken Kesey’s overhauled Further Bus, complete with comfortable seats, a better sound system, and hyper-drive … where it may not take you further, but you will arrive more relaxed and energized.
Writing as I am here with 20/20 hindsight, I must say that both Kember and Pierce were so much more together than they are as solo artists. What makes this album so good is that the dream of Spacemen 3 is still visible within these grooves, with the weaker material being Jason Pierce attempting to find his way without his old dance partner.
*** The Fun Facts: Following the breakdown in relations between Spacemen 3 co-founders Peter Kember [Sonic Boom] and Jason Pierce [J. Spaceman], the group’s bassist Will Carruthers, drummer Jonny Mattock, and guitarist Mark Refoy were asked by Pierce to form a new group including longtime friend Steve Evans, subsequently calling themselves Spiritualized. The band took their name ‘Spiritualized’ from an adaptation of the text on the back label of a bottle of Pernod … yep, it was that simple.
Strange how the letter ‘S’ shows up repeatedly in Spacemen 3, Spiritualized, and Pete Kember’s band Spectrum.
Jason Pierce on the album’s artwork – “The artwork was done by Natty (Brooker), who I used to live with in Rugby. He used to wake up in the morning and start his day with mushrooms. Like days and days, he would have all the dried mushrooms under his bed and do these amazing drawings, and he kind of lost himself in his art. He’d done a couple of things for Spaceman 3, so when we did our first album I asked him if he’d do the artwork for that. I suppose when you start bands you involve everybody, as many people who want to get involved who aren’t pissed off that you’re going to be traveling beyond the town. So he did that, and then somebody at the label … if you’re taking a photograph for a toothpaste ad, somebody makes a model of the toothpaste to take the photo with. I’d always been in to artwork, but the idea that you can get the record company to pay to have this drawing made in to a three-dimensional image, it suddenly clicked with me that we didn’t have to settle for the given standards. My line was always ,“We’re making beautiful music here. We shouldn’t be packaging it like the cheapest junk we possible can.’”
– Jenell Kesler
© Copyright http://www.psychedelicbabymag.com/2018
From The VaultJenell KeslerReviewsSpiritualized