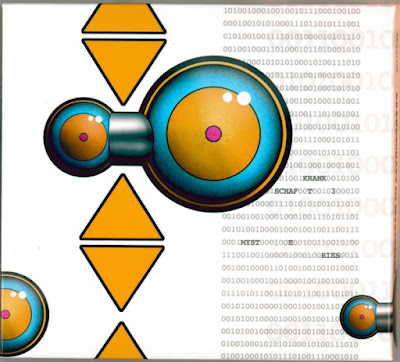 Krankshaft – III Mysteries (Stereo Records, 2017)
Personnel:
Steve Pond – guitars, keyboards, vocals
Alex Tsentides – bass, vocals
Kevin Walker – drums, vocals
Visuals by Dr. Foxon
Originally known as The Maximum Effect, Krankshaft began in 1985 as a trio featuring guitarist Steve Pond, bassist Phillip Reeves (aka Dead Fred), and drummer Mick Stupp, all three of whom were former members of space punk band Inner City Unit with saxophonist Nik Turner. After they recorded their high energy 7-inch single “Espana/The Wrecker”, Pond and Reeves were asked by the late lyricist/poet and Hawkwind vocalist Robert Calvert to be his backing band. Calvert briefly called them Krankshaft for a live performance and recording at London’s Queen Elizabeth Hall in 1986, then they changed their name back to The Maximum Effect for subsequent performances. Soon thereafter, Pond and Reeves parted ways with Calvert who died of a heart attack in 1988.

In 2008, Pond and Reeves performed as a duo at a memorial concert marking 20 years since Calvert’s death. After deciding to continue on as a reformed Krankshaft, they recorded two studio albums, The Flame Red Superstar and Song Poems. They also recruited Stupp to play drums for their legendary reunion performance at the Sonic Rock Solstice festival in 2010 that was recorded and released on Stereo Records that same year. After Reeves left to join Hawkwind in 2013, the band carried on as a trio with Pond playing guitar, synths and singing; Alex Tsentides playing bass; and Kevin Walker playing drums. With the release of Three in 2014, this lineup has stayed together to perform at festivals and packed clubs throughout the UK.
III Mysteries is the historic second release by Krankshaft to be comprised solely of original material that they wrote and recorded as a band. Faithful to tradition, the artwork of Dr. Foxon is intricate and elaborate with a four-way foldout digipack, comic, and chemical exposure testing kit. The first tune, “Hollow Earth”, starts out the album with a progressive feel. The rhythm section of Tsentides and Walker is solid with fluid riffage, and Pond’s guitar work is tasteful without being too flashy, the mark of skilled musicianship. 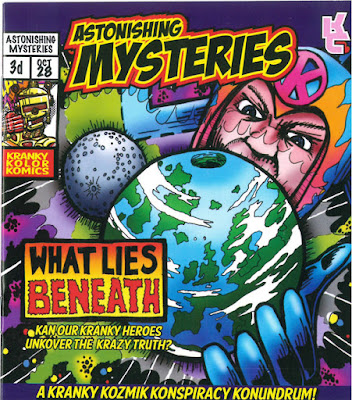 Throughout the recording the musical themes and progressions tell a story that supports and compliments the lyrics of each tune. “Our Words are Golden” is upbeat space punk, the atmospheric synth loops cracking of thunder amidst the interplay between drums, bass and guitar. Pond is poetic when he sings, “Why don’t you listen…? We mean what we say, our words are golden.” Strong sustain and musical phrasing contrast the bleak, dystopic organ of “Chem Trails”. Pond picking guitar chords like an underground waterfall, his lyrics relate the wondrous feeling of being potentially suffused by toxic manmade chemicals.
On “The Hum”, the reverb and delay-laden vocals are sung as though through a distant distorted telephone connection. The effect is unsettling with a driving rhythm that is reminiscent of Judge Trev’s work with Inner City Unit. Cascading synths and electronics lead into “Binary Star”, Pond working his vibrato-charged guitar through musical shifts and changes reaching transcendent highs while lyrically offering a meditative, wholistic vision of space rock unity. “Interstellar Highway” has a straight ahead psychedelic punk feel in simple form and intimates the appeal of interdimensional travel on Route 375 while strapped into a safety cage. 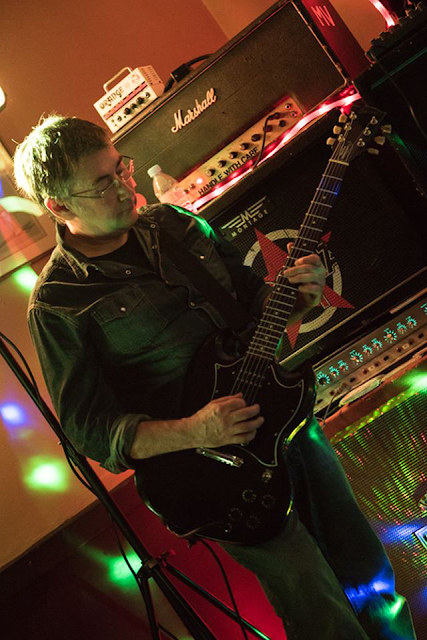 Steve Pond  (photograph by Pete Stanley)
“The World Is Flat” completes the outing, synths sweeping with falling-star cascades over clean, articulate, vibrato-saturated guitar chords giving one the feeling of bearing witness to a meteor shower. The tales told on III Mysteries seem to reflect upon centuries-old questions about the earth’s origin and where humanity came from. Pond’s guitar work is emotive and distinctive with screeches of feedback and amazingly pure tone, all while he and his band lead the listener through time and space in a land of earthly beginnings.
Sources:
Discogs Marketplace: Robert Calvert
Discogs Marketplace: Krankshaft
Discogs Marketplace: Maximum Effect
Krankshaft Website: http://www.doremi.co.uk/krankschaft/
Uncut: “Hawkwind Members Get Together For Tribute Concert,” September 20, 2008.
Wikipedia: Dead Fred
Wikipedia: Krankshaft
Wikipedia: Robert Calvert
– Jack Gold-Molina
© Copyright http://www.psychedelicbabymag.com/2018
Jack Gold-MolinaKrankshaftReviews