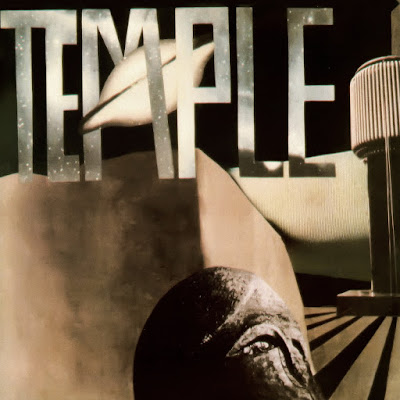 Temple – “Temple” (Guerssen Records, 1976/2018 reissue) review
https://guerssenrecords.bandcamp.com/album/temple
Temple was released in 1976 on the German Pyramid label and featured Zeus B Held from Birth Control on keyboards, Otto Bretnacher on drums, Heinz Kramer on guitar, Joachim Weiss on bass, Pauline Fund on percussion and vocals, Poseidon on vocal, and Rolf Foeller on guitar.
Pyramid label released a lot of strange ‘kraut’-electronic releases, but Temple is more of a rock release. This is a 24 bit remaster from the original tapes so it should sound better than ever. The album’s five tracks start with the strange rocker, “Heathen”. The vocal is almost spoken word with an uptempo rhythm. Strange keyboards are all over the place and it goes into a sort of surf rock piece. Then back to weirdness. “Leaves Are Falling/Black Light” has a proto-goth feel to it. When it slows down, there is a nice floating organ with some strange synth sounds and a female vocals. This mellow section with some guitar, one main melodic line and the other reverberating continues for some time and then the mellotron fills the gap. Trippy!!! “Age Of Ages” is a more happy track but short and features Pauline on vocals. “Ship On Fire” brings back the energy from the opening track with the same style of spoken word like vocals and a cool Hawkwind like groove. I really like the mini-moog solo on this track while the mechanical heavy guitar and bass driven riff just drives things forward. Very cool track. “Crazy Hat/Kingdom Of Gabriel” ends this interesting artefact from the 1970s. It starts slowly with mainly keyboards, guitar and female vocals but changes very suddenly with an almost punky vibe to it as they kick into “Kingdom Of Gabriel”. Note, this was previously re-released in 1997 on the Psi-Fi label out of the UK but this is the first vinyl re-release.
– Scott Heller
© Copyright http://www.psychedelicbabymag.com/2018
ReviewsScott HellerTemple