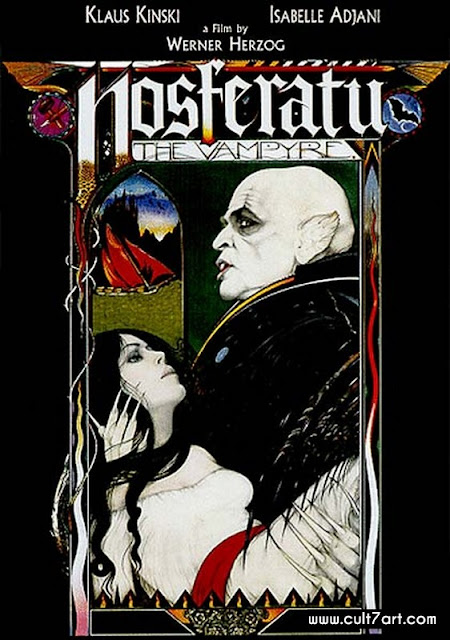 Nosferatu: Phantom der Nacht–screening and Q & A
Hollywood Berlin: Exiles and Immigrants @ UCSB Pollock Theater
Visionary German director Werner Herzog was present at UCSB’s Pollock Theater on Thursday, October 12, for a post-screening discussion of his 1979 art house film Nosferatu: Phantom der Nacht, moderated by Professor of Film and Media Studies Patrice Petro. Considered an homage to F. W. Murnau’s 1922 Weimar era silent film classic Nosferatu (itself based on Bram Stoker’s Dracula novel), Herzog’s iteration of Nosferatu stars Klaus Kinski as Count Dracula, Bruno Ganz as Jonathan Harker, Isabelle Adjani as Lucky Harker, and Roland Topor as Renfield; with a film score by Popol Vuh. The film incorporates elements of fairy tale, myth, humor, horror, and eroticism–with many tableaus strikingly shot by cinematographer Jörg Schmidt-Reitwein; as well as a riviting opening sequence–filmed by Herzog–juxtaposing a bat in flight superimposed over mummies from Guanajuato, Mexico.
Werner Herzog first emerged as one of the shining lights of the New German Cinema (which was itself inspired by the French Nouvelle Vague and directors François Truffaut and Jean-Luc Godard), which flourished during the late 1960s through 1980s; his peers included Wim Wenders, Rainer Werner Fassbinder, Volker Schlöndorff, and Margarethe von Trotta–all of whom had a stated goal of realizing a cinema of artistry over commercialism.
During the Q & A Herzog mentioned that Murnau was almost a grandfather figure for him when he was a young filmmaker, because all of the potential father figure filmmakers of the previous generation had either fled Germany for Hollywood when Hitler came to power, or had become propagandists for the Nazis–rendering their films worthless. Herzog also commented on his deep relationship with Klaus Kinski–Herzog’s muse who also starred in his masterpieces Aguirre, the Wrath of God (1972); Woyzeck (1979); Fitzcarraldo (1982); and Cobra Verde (1987) –stating that Kinski, though often difficult to deal with, was inspired, and that nobody has topped Kinski’s genius in portraying a vampire with a touch of humanity in any other film to date. The director also spoke of his friendship with musician Florian Fricke (the leader of Popol Vuh and composer for Nosferatu and several other Herzog films) whom he said passed away much too early, while middle-aged, and whom he still misses. 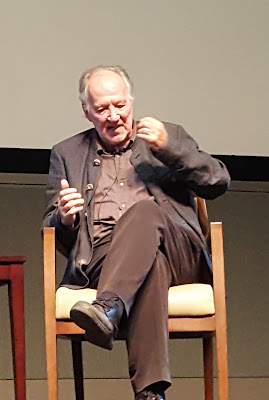 Photo by Matthew O’Hanlon
Other topics addressed included the difficulties in utilizing 10,000 rats in Nosferatu; confrontations with the police; the decision to use Richard Wagner’s prelude to Das Rheingold in the film; the need to not compromise one’s vision and creating a personal code of ethics; the insipidness of typical, formulaic Hollywood screenplays; and the difficulties Herzog has had in getting financial backing for many of his films due to his maverick spirit and pura vida approach to life. The artist also impishly spoke of his Rogue Film School seminars which attempt to help young filmmakers outwit bureaucracy through lock picking, creating one’s own shooting permits, and other guerrilla tactics which promote a DIY self reliance over things taught in academia. Herzog also wryly noted that he does not take kindly to being considered a “Teutonic director,” as he is Bavarian. Herzog concluded the evening by bestowing his blessing to all of the young future filmmakers in the audience, wishing them every success.
– Sean Mageean
© Copyright http://www.psychedelicbabymag.com/2018
Live ReportWerner Herzog