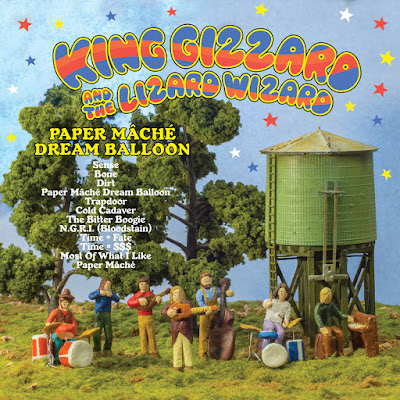 King Gizzard & The Lizard Wizard – Paper Mâché Dream Balloon (Heavenly Records, 2015)
Recorded entirely on acoustic instruments and released on 13 November 2015 on the band’s Bandcamp, and then a week later on Heavenly Records, Paper Mâché Dream Balloon makes for an ideal introduction to the acoustic sound of King Gizzard and The Lizard Wizard for those who might find their previous (and subsequent) albums a little too heavy.
Across a dreamy set of 12 tracks, King Gizzard pay tribute to the psychedelic folk sounds of the sixties while showcasing a strong knack for song writing. Although it may be looked upon by some of the band’s fans as a stripped down incarnation of the typical psychedelic garage rock King Gizzard are usually associated with, Paper Mâché Dream Balloon is an excellent album that shouldn’t be overlooked due to its more subdued nature.
The first half of the album is primarily dominated by lighter acoustic numbers. Songs such as “Dirt” “Bone” and the album’s title track feature elegant flute playing amidst a sea of Arpeggiated acoustic guitars, clarinets and drums that thankfully don’t sound like they were recorded in the 1960’s. Carefree lyricism dominates some songs “Stuck in a daydream/Under a moonbeam/Head on my pillow at home” while later tracks have darker, more sinister lyrics. Like many great psychedelic albums the lyrics tend to mix the two and tread the brink of madness. These contrasts generally work well, although some lyrics feel more whacky than they ought to be due to the more uplifting instrumentation, such as on “N.G.R.I. (Bloodstain).”
The albums second half sees the band experiment outside the primarily psychedelic-folk sound it initially presents us with. The single “Trapdoor” uses a percussive vocal refrain along with some Ian Anderson-esque flute playing to create a tense, catchy atmosphere. The band creates a similar vibe On “Bitter Boogie”, using a groovy bassline along with flailing acoustic guitars to create an eerie freak-out dance track. The album finishes up with a track called “Paper Mâché” a short catchy instrumental track that reprises the album’s main hooks with flute melodies. This track really helps round out the album, and reminds the listener how densely packed the album is with lush, infectious melodies.
Despite the fascination and reverence King Gizzard hold for their influences they never sound too derivative on Paper Mâché Dream Balloon. Sure there are an abundance of beatlesque hooks through the album, yet King Gizzard’s musical traits shine through. No doubt part of this is owed to the band’s instrumental proficiency, as well as their enduring dedication to melody. Even the less stand-out tracks such as “Cold Cadaver” hold up due the band’s strong sense of pop song craft. This, combined with the lack of over-indulgent extended jams makes Paper Mâché Dream Balloon an incredibly tight album. Coming in at a little over half an hour, with few of the songs lasting longer than a mere three minutes, the album feels wholly ideal for a lazy afternoon in the sun.
– Oisín L. Tozer
© Copyright http://www.psychedelicbabymag.com/2018
King Gizzard & The Lizard WizardOisín L. TozerReviews