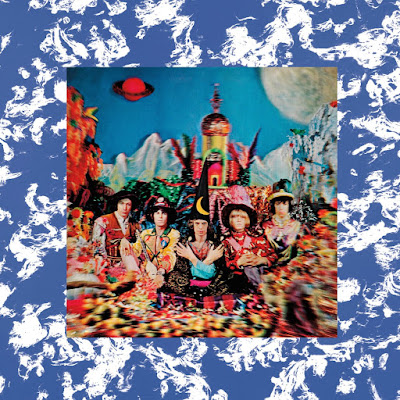 The Rolling Stones – Their Satanic Majesties Request [50th Anniversary Special Edition] (ABKCO Records, 1967/2017 reissue)
Wonderful, but not needed …
Ahhhh … these special numbered editions.
Allow me to please say that there is no need for this reissue to exist, except for those who want things because they are either a completist, or are profoundly fooling themselves into thinking that they can hear something they actually can not.
As to the ‘hand numbered’ aspect … while this package was certainly hand numbered, it was not hand numbered by any of the members of the band, just some person with good penmanship sitting there for endless days endlessly jotting down digits, and I say endlessly, because my edition was in the 12000 range, and that was a promotional item, leaving the copies that exist worldwide to be so staggeringly high that the aspect of a hand numbered limited edition is irrelevant. It is my sincere belief that with this album being The Rolling Stones’ answer to The Beatles’ Sgt. Pepper, that the number is also a nod to the sequential jacket numbering of The Beatles White Album, and nothing more.
As to the packaging … it’s hands down wonderful, though as a foldout, I do not imagine that it is going to age well. Of the two CD’s, I can’t complain about the sound quality at all, though that being said, the vinyl is a bit suspicious to me, leaving me to believe that the original re-master was a bit lackluster on purpose in order to let the other versions shine all that more brightly. The booklet is fun for a few minutes, though any Stones fan worth their salt has already seen these few images and knows the backstory by heart. There is also something not quite right about the ‘original’ lenticular [the 3D cover], as they call it ‘restored’, and I remember reading once that the original had been destroyed so that it could no longer be copied many many years ago.
When it comes to the music, understand that you are getting four copies of the very same album in varying formats, you are getting no outtakes or special material. Again, there’s nothing to complain about with the music in general, and when it comes to price, the package has been kept under $100US, though for that money, I think I would have purchased an original mint copy, or failing that, one of the later quality reissues … all totaled, including tape, CD’s and vinyl, you have nearly 250 versions to pick from.
I sort of feel that I’m complaining about a $125,000 luxury car, because this version of Their Satanic Majesties Request, one of my all time favorite albums is genuinely great, it’s just that an original package that included a perfect 180 gram issue of the album, along with the CD, would have been far better, and far more rewarding, as most people are going to leave the mono versions sitting on the shelf.
But, it’s a big world with lots of choices in it, and this is certainly a ‘big’ production, though it lacks the spirit and essence of the times from which it rose, shifting it more into something contemporary, yet even with all you’re getting, it comes across lacking a soul and a connection to those hazy days, when this album would spin late into the night, enhancing your trip with its visual and musical effects.
– Jenell Kesler
© Copyright http://www.psychedelicbabymag.com/2017
Jenell KeslerReviewsThe Rolling Stones