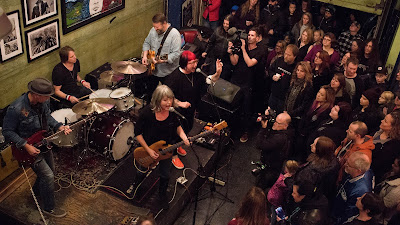 Goodness began in Seattle in 1994, during the height of the grunge explosion. Led by former Hammerbox vocalist Carrie Akre, they released three studio albums between 1995-99. In 1999, they were joined by Pearl Jam lead guitarist Mike McCready – who replaced guitarist Garth Reeves – to form The Rockfords, with Rick Friel also replacing Fiia McGann playing bass for that project. The other members of Goodness include Danny Newcomb – guitar, and Chris Friel – drums.
They started off their raucous set at Seattle’s Easy Street Records with “Smoking,” from their self-titled first album that recently received a colored vinyl reissue. A dynamic blues-rock ballad, Akre’s vocals were clear and powerful. They immediately established a rhythmic, guitar driven cadence, Newcomb soloing expressively with feedback and reverb. With the soul-influenced punk feel of “Superwise,” Akre wailing through the band’s explosive crescendos, “Lost” was a slower ballad featuring McGann harmonizing during the chorus and Newcomb raging with musical sustain as he worked the fretboard of his Gibson SG. 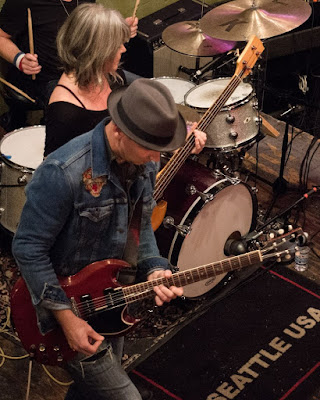 Friel and Newcomb exchanged riffs during “Goodbye,” ending the tune in feedback that carried over to begin the upbeat “Runaround (Garth Rock).” The intensity dropped with McGann laying down a bass vamp against Friel’s tom patterns, making way for Newcomb to solo. During “Wicked Eye,” Friel continued his exchanges with Newcomb and Reeves, both guitarists in sustain. Newcomb soloed with shrieking open chordal string-bending as he weaved his way through “Eveready” against Friel’s tom patterns, working in his wah pedal with Akre caterwauling through the breaks of “Bitterman.” 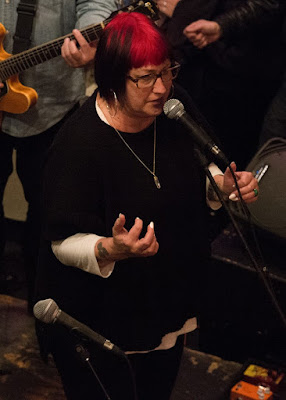 Friel and McGann upbeat and punkish against Reeves’ and Newcomb’s feedback on “Sincerely Yours,” their final tune was the ballad “Boy Glory.” With Friel riding the toms, Newcomb soloed melodically in straight time with classic early grunge distortion and tone. The tune slowed to an end with the crowd cheering, and brought a close to an epic moment in Seattle’s musical history. “Everybody has been playing their instruments for a lot of years. We love it and there is a passion for it,” Friel said when asked about the band’s longevity and creative success. “The music has been a part of people’s lives,” Akre concurred. “Several people have said, ‘This got me through something. I needed this, like medicine.’ And that is powerful. I find that very profound.”
All photos by Jack Gold-Molina
– Jack Gold-Molina
© Copyright http://www.psychedelicbabymag.com/2017
GoodnessJack Gold-MolinaLive ReportReviews