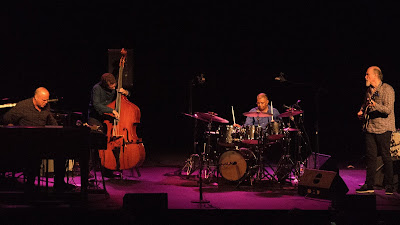 Supporting their new album Hudson, named for the Hudson Valley in New York State, the band under the same name made a stop at Seattle’s Moore Theater on a rainy, windy autumn evening. Featuring John Scofield – guitar; John Medeski – Hammond B3 organ, Fender Rhodes electric piano, and piano; Larry Grenadier – acoustic bass; and Jack DeJohnette – drums, all of the covers that they played were associated with the Hudson Valley stretching from Troy to Yonkers. Scofield recalled wanting to go to the Woodstock festival in 1969, but his parents wouldn’t let him because he was too young. Joking that he was only about three, in actuality he was closer to 17.
They led off with a slow, bluesy version of “Wait Until Tomorrow” by Jimi Hendrix. DeJohnette solid and funky – free in the way that he has been known for since his days with the AACM in the early 1960s, Scofield and Medeski traded solos. The title track from Hudson began with an improvised psychedelic intro. Medeski and DeJohnette working off of each other, the organ had the sound of 1950s computers, ancient in today’s world. The rhythm was reminiscent of Miles Davis’s “Miles Runs The Voodoo Down” from his seminal 1969 Bitches Brew album. Scofield improvised over DeJohnette’s slow phrasing, their exchanges thunderous and broken, out and back in. Grenadier and Medeski followed with repeated yin and yang forms, finally back into the groove as the intensity lowered with space robot organ, DeJohnette running with a shuffle ending. 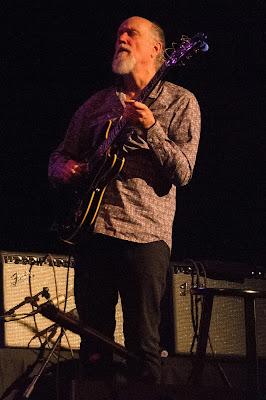 John Scofield
The fierce mid-tempo “El Swing” by Scofield, featuring a piano-drums duet against the tune’s rhythmic structure, was followed by another Jimi Hendrix composition, “Castles Made Of Sand”. With an explosive beginning in broken time, uptempo yet outside of the basic structure, it was almost unrecognizable. DeJohnette started with a mid-shuffle, the chorus played by Scofield who was comped by Medeski. Scofield took an extended solo within the framework, then the tune stopped. DeJohnette began singing the lyrics, his vocals stirring, and the band started to play. Medeski soloed with currents and eddies that broke apart to create waves of sound, finally bringing a masterful, powerful rendition of this classic to an explosive ending.
Bob Dylan’s “A Hard Rain’s A-Gonna Fall” started with heavy, slow-mid Afro-jazz toms.
Grenadier came in with mid-tempo jazz, Scofield playing the melody over Medeski’s dreamy organ. The time was slow, out while also in, with Scofield comped by Grenadier and Medeski. Finally staying out, DeJohnette and Scofield soloing and phrasing with each other, Medeski created waves of organ tone like a river overflowing onto a floodplain. Grenadier’s bass playing was intermittent, then picked up intensity as free-form, the music increasingly growing louder, still in a broken swing. The rhythm remained disjointed, then there was no time, only organ tone and bass, then silence. 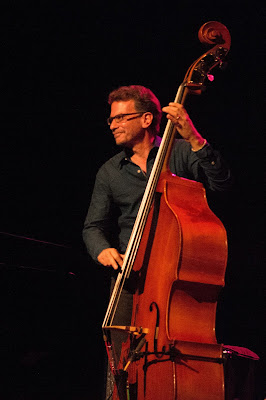 Larry Grenadier
With no time for an extended period, something started to take form with the organ and bass together, the organ gaining intensity. Scofield and DeJohnette came in, Scofield playing the melody over the disjointed rhythm, then it washed back completely out. Grenadier articulated a bass solo, then DeJohnette began to sing Dylan’s lyrics, and the band came in. DeJohnette singing while playing the drums, he followed the flow of his vocals while he riffed on the snare. After Scofield soloed with Medeski on piano, DeJohnette came back in on vocals, then the time broke up, and the tune ended.
Hudson closed their set with an encore that featured a rendition of Joni Mitchell’s “Woodstock”. DeJohnette doing cymbal and tom work with Scofield, the rhythm at first stayed in one place. Medeski soloing on piano, Grenadier kept the melody on bass, with Scofield out but also in. The lyrics sung by DeJohnette were transcendent. Scofield phrasing with form, his soloing was adventurous, Medeski comping him then soloing on piano. The time stable, the intensity of the rhythm decreased, and with cymbal wash the band took the tune outside to end the evening.
All photos by Jack Gold-Molina
– Jack Gold-Molina
© Copyright http://www.psychedelicbabymag.com/2017
HudosnJack Gold-MolinaLive Report