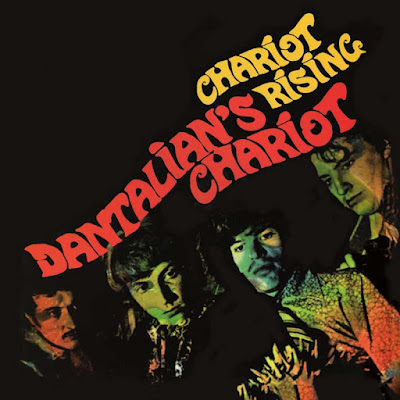 Dantalian’s Chariot – Chariot Rising (Esoteric Recordings, 2017)
Recorded fifty years ago, with only two of its ten tracks seeing release at the time, “Chariot Rising” by Dantalian’s Chariot has long been considered a classic collection of psychedelic rock. Born from the remnants of Zoot Money’s The Big Roll Band, the band included Hammond organ/Wurlitzer piano/vocalist Money, guitarist/sitarist/vocalist Andy Somers (later Summers) who became guitarist for The Police, bassist/vocalist Pat Donaldson, later of Fotheringay, and drummer/percussionist/vocalist Colin Allen, who went on to join John Mayall and The Bluesbreakers, with Money and Somers penning the bulk of the material.
The band, named after one of the spirits consulted by King Solomon, Dantalian being one of the great Dukes of Hell as well as the spirit for art and education, played its debut gig at the Windsor National Blues Festival in August 1967. The festival also marked the first appearance of Peter Green’s Fleetwood Mac, as well as appearances by The Nice, Arthur Brown and Ten Years After. Dantalian’s Chariot signed with EMI’s Columbia imprint (home of Pink Floyd and The Pretty Things) and soon released the single “Madman Running Through The Fields” b/w “Sun Came Bursting Through My Cloud” which failed to chart, although the a-side was immortalized by its inclusion on the “Nuggets II” box set. The band was soon dropped by the label, the remainder of the group’s recordings, the result of two trips into the studio, remaining unreleased until 1995’s Tenth Planet LP, appeared, containing nine of the tracks. Wooden Hill’s 1996 CD release added “This Island” to the track listing of “Chariot Rising.”
Besides its trippy melody and lysergic lyrics, “Madman” was one of the first recordings to include backward tapes and other psychedelic sound effects which complement the melodic guitar work of Somers and majestic organ of Money, who also supplies gorgeous vocals, making it a truly a wonderful four minute piece of 1967 psychedelia. “The Island” showcases Somers’ wah wah and feedback fueled guitar work including an incendiary solo, while Allen bashes his drum kit into submission and Money’s organ and vocals fill out the sound on this heavy psychedelic tune. Two of the tracks feature Somers on sitar, an instrument he was learning at the time. “Fourpenny Bus Ride” is a haunting four minute instrumental complete with ethereal sound effects. “Soma (Parts One & Two)” co-written by Somers and Nazir Jarazbhoy, who was Somers’ sitar instructor, is a six minute plus instrumental with a much more accessible feel and featuring flute work by Rick Newall, resulting in a Moody Blues like vibe. “Coffee Song” written by session players Roy Smith and Tony Colton, is a mid-tempo pop tinged number which was recorded and released by Cream. “World War Three” reflects the then prominent, Cold War mentality and is a vehicle for Money’s organ, with Somers adding some tasty jazz flavored guitar. “Four Firemen” is literally a newspaper article set to music, telling the story of a quartet of fire fighting heroes. “Chariot Rising” closes on a mellow note, with Money and Somer’s ode to flower children “High Flying Bird” filled with its double entendre references to San Francisco losing its “Haight” and featuring a tasteful, jazz influenced solo by Somers.
Taken as a whole, “Chariot Rising” is an interesting mixture of tunes and influences and is reflective of a band filled with talent and versatility. It is quite a shame that Dantalian’s Chariot was never given a chance to explore the possibilities offered by the band’s members and their individual, as well as collective, potentials. Regardless, it is a most interesting document of the free flowing, explorative nature of the foursome’s musical endeavors and without question has a place in the collection of anyone interested in the psychedelic sounds of 1967.
Many thanks to Mark and Vicky Powell at Esoteric Recordings for this latest reissue of Dantalian’s Chariot’s sole release, which sounds better than ever thanks to the remastering job done by Ben Wiseman. The package is rounded out by a 16-page full color booklet including an essay by Malcolm Dome, full musician credits, biographical notes on band members and photos of the band as well as artwork from the original 45rpm release of “Madman Running Through The Fields.”
– Kevin Rathert
© Copyright http://www.psychedelicbabymag.com/2017
Dantalian’s ChariotKevin RathertReviews