Al Di Meola at The Neptune in Seattle September 12

Al Di Meola at The Neptune in Seattle September 12 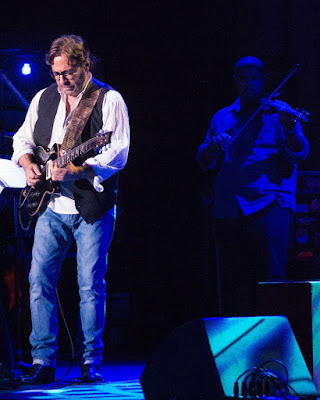 A native of New Jersey, guitarist Al Di Meola began his recording career at the age of 19 while studying at Berkeley School of Music. The story goes that in 1974, Chick Corea was seeking a replacement for Bill Connors in his groundbreaking fusion band Return To Forever. After he received a cassette of Di Meola’s playing, Corea was so impressed that he subsequently hired him following an audition. Return To Forever disbanded in 1976, and Di Meola began his highly successful solo career. His second LP as a leader, 1977’s Elegant Gypsy, received a gold record award, and he soon became known as one of the world’s most talented guitar players. The personnel for this tour, celebrating Elegant Gypsy’s 40th Anniversary, featured Di Meola – acoustic and electric guitars; Phil Magallanes – keyboards; Evan Garr – violin; Elias Tona – bass; Gumbi Ortiz – percussion; and Luis Alicea – drums.
The night was elucidated by Latin fusion, Di Meola’s trademark musical style. Noticeably absent were Elegant Gypsy’s most famous numbers “Race With Devil On Spanish Highway” and “Elegant Gypsy Suite,” both incorporating the staccato picking that he is known for. However, the shifting, changing rhythms rising to climax with fast tempo Spanish flamenco are what Di Meola’s audience came to see, and he more than delivered. 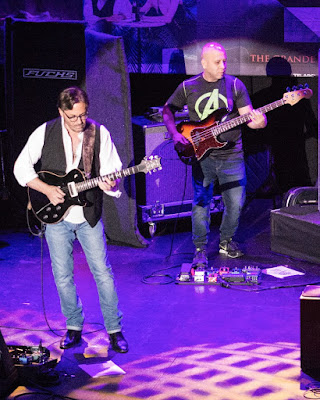 “Flight Over Rio” began with a slow melancholic intro. Congas and bass led into a fast tempo vamp and Di Meola came in at speed. With Alicea ghosting on the drums, Garr took a solo on violin and Di Meola moved to percussion – a cajon. Garr’s playing was virtuosic, and after sending his solo into a climax, the rhythmic intensity dropped. Moving back to guitar, Di Meola traded riffs with Magallanes bringing the tune to another crescendo. As that happened, the emotional tension building then releasing, Garr began to laugh and cooled Di Meola off with his sweatshirt. Ortiz took a percussion solo while Alicea kept time on the hi hats, the tune building back up to an explosive end.
After performing the reflective “Babylon” and “Adour” from 2015’s Elysium CD, where he made detours into Return To Forever territory touching on the theme from “Song To The Pharaoh Kings,” he came back to the Elegant Gypsy album. The evocative and resonating “Midnight Tango” featured Di Meola playing dueling runs with Garr and Magallanes, Tona playing his bass like a guitar during his solo. When the tune came to an end, with its varying melodies that strike chords of familiarity to every long-time fan of his music, Di Meola and his band took a 15-minute break.
After the intermission, he performed a solo acoustic set of Beatles tunes from his 2013 album All Your Life, recorded at Abbey Road Studios in London. Telling the story of how he had been on a particularly enjoyable tour of Europe one summer, he described to the audience how ending that journey with his recording session in London was one of the greatest experiences of his career. He followed up his set of Lennon/McCartney tunes with an unreleased lullaby for his baby daughter where he was joined by Garr, then performed his acoustic hit “Mediterranean Sundance” from Elegant Gypsy with his band sans keyboards and bass. This is a tune whose widespread infamy was bolstered even further when it was re-released on the 1981 live album Friday Night In San Francisco featuring Paco de Lucia and John McLaughlin. 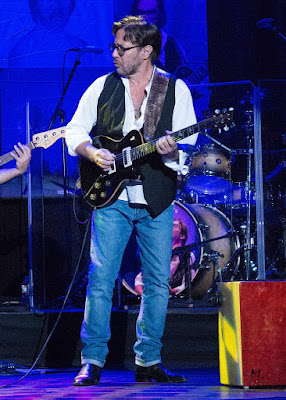 Finishing his acoustic set, Di Meola switched back to electric guitar and was joined by the rest of his band for Return to Forever’s “Medieval Overture,” from the 1976 Romantic Warrior LP. Musically faithful to the original, Di Meola and Garr traded solos and dueled on the melody, their dynamics building in intensity then blowing straight ahead to crescendo. The evening was highlighted by Garr, whose virtuosity on violin stood out and complimented Di Meola at a very high level. Playing to a raucous, cheering crowd, the entire band was in fine form and brought that feeling of musical freedom that jazz fusion originally stood for. Coming from one the players who spearheaded the idiom in the early 1970s, it was clear that it never left us.