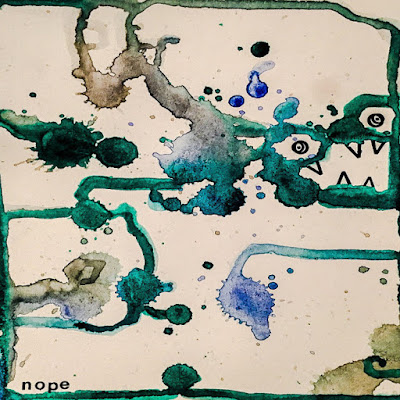 MSB – Nope (2017)
https://brownbass.bandcamp.com/album/nope
The appearance of jazz in the early 1900s – with its inconsistency-as-structure whereby uncertain melodic propositions are driven to ideal resolution via brave curiosity and explorative interest pursuing the line of inquiry and expression, with Trust or Bust and lack of ego to ensure its accuracy – might be seen as symptomatic of a societal communication breakdown, not a dysfunction but an adaptation to generalized psychoemotional fragmentation after the First World War.

Now here it is about a hundred years later, more wars under our belts. and language hangups like dyslexia and mental disorders like ideas of reference – whose sufferers are constrained by word association to such a degree all the seemingly innocuous titles and symbols of modern life conspire as glyphs of terrible personal relevance – are on the rise, complicating the usual ways of communication, and some might argue the coining of a brand new universal language without booby traps is timelier than ever.

Nope by MSB, short for the surnames of the trio’s artists, Mhalek, Santucci, and Brown, as in Becca Mhalek (bari & alto saxophones), Rich Santucci (drums), Mike Brown (double bass).is available for sampling and purchase now on Apple Music at this link. The drums are strong, rumbling and popping, the bass funky and smooth, the saxophones jittery, jumping, and deft. The beauty of this music is its intriguing unpredictability. Every song is an experiential act culminating in palpable psycho-emotional climax, beginning with the opener, “Bigfoot”. My advice to intrepid listeners: surrender to this album as you would to an instructive altered state undertaken by choice. You won’t be sorry. A great part of the magic of this mystery is of feelings captured fresh, unqualified and raw, but in no way does it want for show of technical expertise and precision, particularly not in tracks like the tour de force, “Elegia”, presumably someone beloved’s memorial, rising from the album’s middle as a bastion of composure before being subsumed in “Bullitt”’s wild funk swamp of Morphine-esque talking sax and rumbling drums and bumping strings, then turning mellow, the lone alto horn crying out for lost ships in “Meltaway,” bari sax shining again, graceful, stately in “King”, where the drums and bass flow like a river to buoy its voice, and all three instruments together as a galaxy, a small group of planets in concert, each perfectly gauged to the other two in exact synergistic gestalt. Wow, super cool. “Badass” is great, these are excellent musicians, this is great stuff, touched by fire, crazy, divine, and “Sultan,” the closer, is a melancholy swinger of a thunderhead of graceful hooks and throbs and unspelled logic, exclamation points and points et cetera.
Author William S. Burroughs is known for having popularized the “cut up technique,” a deceptively simple device in which sentences are cut in half and reconnected, both with themselves and associated sentences, to form new unexpected connections and expose the source code of reality as a way of sabotaging its inbuilt control mechanism. This can be done by anyone with any medium of expression. If you think about it, human perception is naturally doping it, sights crossing one’s path inevitably jarring unexpected associations into play. This album is doing the same thing by surprising our tendency to routine. It’s completely incredible, and I hope I never get used to it. I hope it always feels as brand new as tonight.
Review by Zack Kopp/2017
© Copyright http://psychedelicbaby.blogspot.com/2017
Jazz CornerMSBReviewsZack Kopp