The Origin Uber Band at the 2017 Ballard Jazz Festival Seattle, Friday May 19th

The Origin Uber Band at the 2017 Ballard Jazz Festival Seattle, Friday May 19th 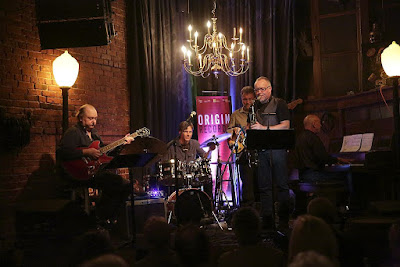 The Origin Uber Band consists primarily of artists who record for the Origin Arts label. Given that Origin has organized the Ballard Jazz Festival in Seattle since it began in 2002, it seems natural that some of the region’s best players would come together this year if for no other reason than to celebrate the festival’s 15th anniversary. Performing two staggering sets of music at the Conor Byrne Pub, it featured Dave Peterson – guitar; Richard Cole – tenor saxophone (first set); Brent Jensen – tenor saxophone (second set); Rick Mandyck – piano; Chuck Deardorf – electric bass; and John Bishop – drums.
The night’s events began with a laid back, mid-tempo melody. There was an immediate sense that this band could do anything they wanted. Mandyck cut loose with a piano solo, and was complimented by Bishop laying into repeated patterns on the drums.
With Peterson playing the melody, the rhythm section shifted and Cole began soloing. Working off of the theme, Peterson alternated into a guitar solo that led into a transition, Deardorf moving out of the increasingly shifting rhythm to take his first solo. This led back into the melody, Bishop improvising fiercely.
“Grizzly Dave” was the second tune, a bluesy shuffle. It began with the theme then broke into a guitar solo. As Peterson began to rage, ebbing and flowing while building up intensity, Bishop complimented him, becoming even more loose as the tune progressed. Cole stepped in, soloing as the groove picked up, and Bishop comped with Mandyck to lead back into the melody. Working off of each other, the band maintained a steady pulse – riffage to the end.
As the night went on, the first set of the evening led to their second later set. Their mid-tempo swing was polyrhythmic and fiery as much as it was dynamic. The intensity would drop to zero as Deardorf took a bass solo, but when it was Mandyck’s turn on piano, Bishop would underscore him and incite him like a scene out of a 1930s John Wayne film. Brent Jensen, a tenor saxophonist and recent transplant from Idaho, filled in for Cole who had another gig at another venue at the festival, and he wailed in what could possibly still be described as straight ahead time.
There was a feeling of grace between the players that grew increasingly apparent during the two sets. Peterson’s rage was full frontal guitar nudity as he and Mandyck traded jibes with Jensen. The rhythm section grooved, vamped and swung so ferociously that there seemed to be no end to the possibilities for the evening, until it was time to bring this 15th anniversary performance to a close.