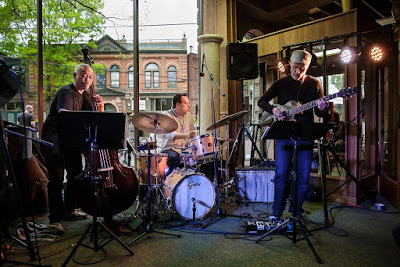 Brad Shepik, who was raised in the Seattle area, began playing guitar at the age of 10 and studied music with the likes of Ralph Towner and John Abercrombie. Besides touring Europe and recording two albums with Paul Motian over the course of five years, he has also performed and recorded with Dave Douglas, Matt Darriau, and Yuri Yanakov’s Bulgarian Wedding Band.
The Brad Shepik Trio, featuring Phil Sparks playing bass and Matt Jorgensen playing drums, began their set with Shepik’s characteristically clean guitar tones. Sparks and Jorgensen were steady, yet their rhythm was shifting and flowing, fluid and dynamic. The trio had the kind of rapport that can only grow through years of gigging together, and it allowed the music to take its own direction. 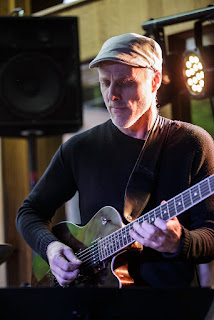 Brad Shepik
While Shepik’s tone was at times reverb saturated, creating a deep, dreamy air of ease and contentment, he soloed ferociously. Sparks and Jorgensen controlled the uncontrollable unambiguously as though handling the reigns of a wild horse while Shepik played effortlessly over the top of them, working with and opposite them. The material ranged widely from uptempo Latin bop to slower ballads, as though the musicians were navigating the currents of a river. 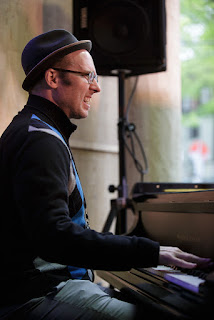 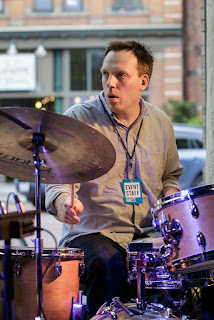 Matt Jorgensen
Playing against the melody with the strong groove of rhythm section, their blues influence found its way to the surface of the music, translating seamlessly to the band’s performance the next day with pianist George Colligan. With Colligan, they played a dynamic set that burned as much as it offered downtime for Sparks to solo accompanied by Jorgensen’s skilled, spirited brush work. Both sets were accented by fierce drum soloing in the ancient tradition of the trade-four, while one of the great highlights was hearing the duet of Colligan and Sparks, whose bass arco was in fine form.
All photos © Jim Levitt
– Jack Gold-Molina
© Copyright http://www.psychedelicbabymag.com/2017
Jack Gold-MolinaJazz CornerLive ReportThe Brad Shepik Trio