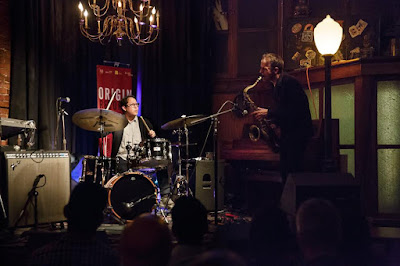 Neil Welch – tenor saxophone, Chris Icasiano – drums/percussion
Formed more than 10 years ago, Bad Luck are an avant-jazz duo featuring Neil Welch playing tenor saxophone and electronics and Chris Icasiano playing drums and percussion. Their musical collaborations began with late night marathon sessions exploring the nuances of creative jazz while they were students at the University of Washington. Founding members of the Racer Sessions avant-garde series, as well as Table & Chairs, a Seattle based arts organization that produces events and facilitates educational programs, they have released four albums on the Table & Chairs Music label and have a fifth scheduled for late 2017. 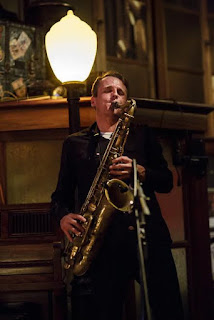 Their set began with Icasiano playing a tribal rhythm, Welch’s saxophone processed through chorus and reverb to make it sound as though he was playing multiple horns. Both musicians maintaining free-form intensity, the rhythm would stop completely while they were in and out of time. Icasiano soloing at will, Welch played with heavy delay, wailing over chorus loops to create a sense of darkness as though being outside during a late night rain storm. 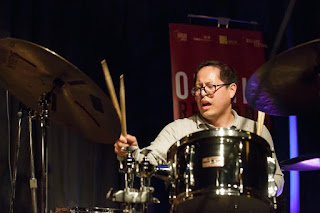 While Icasiano would fluidly break up the time against the sax, on one tune playing repeated patterns with two sticks in each hand, Welch soloed over a deep tonal chorus, expressive and emotional. Icasiano’s patterns would repeat then change, Welch layering his saxophone, the time breaking up and then drums and sax playing against each other. Meditative, oftentimes as low key as explosive, while their playing seemed like free improvisation, it was also tightly orchestrated and coordinated. This was clearly indicative of the time, energy and thoughtfulness that they have put into their work.
All photos © Jim Levitt
– Jack Gold-Molina
© Copyright http://www.psychedelicbabymag.com/2017
Bad LuckBallard Jazz FestivalJack Gold-MolinaJazz CornerLive Report