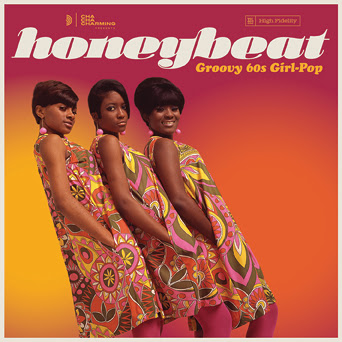 Honeybeat: Groovy 60s Girl-Pop
Compiled by Sheila Burgel (Real Gone Music 2017)
If you’re a fan of The Supremes, The Shanrgi-Las, The Ronettes, etc. there’s nothing wrong with digging on your favorite 1960s girl group artists over and over. But if you have a yearning to dig deeper into this corner of pop and soul music history, there’s plenty of lesser-named yet fully pleasurable acts to discover. Sheila Burgel, the crate-digging catalyst behind the One Kiss Can Lead to Another and Nippon Girls compilations of under-heard feminine musical gems, has now put together this collection of 19 little-known treasures done by female-fronted acts from the 60s. The compilation will more than please those lovers of girl group sounds who want more than what can be heard on oldies radio.
Burgel, who worked on the project for roughly two years and who pulled the 19 tracks from an original pool of 150 of her favorites, elaborates on how she came to choose the selections that appear on the set:
“For the 19 tracks that made up Honeybeat, I wanted to make sure that there was a good amount of variation within 60s girl-pop, hence the mix of soul, teen, R&B, country-pop, garage, wall-of-sound, and ballads. Also, I very much view Honeybeat as a whole album, so the choices and sequence were crucial to me. I spent days walking around NYC with Honeybeat in my headphones, adding and deleting tracks, and working to get the sequence just right.” 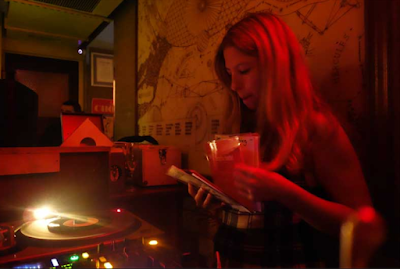 Soul sounds dominate the collection, but there’s snatches of other approaches and feels, and plenty of variety within the soul tracks. There are selections that sound like pure Motown and others that are gritty southern soul recorded at Muscle Shoals and in Nashville, a smattering of Brill Building-sounding pop confections, a novelty tune, etc. There are stompers you could imagine people shaking their asses to at the Wigan Casino, heartfelt ballads, and a wealth of brash tough girl anthems.
Asked what it was in a song that made it a fit for the compilation, Burgel explains, “I’m a stickler for quality songwriting, and I very much believe in good pop versus bad pop, regardless of whether the song is delivered via a sophisticated ballad, a super-giddy teen novelty record, or—as in the case of the Pussycats’ “The Rider”—a lo-fi garage track with a sloppy cut-off ending. If it’s a quality song, I’m in! And after 20-plus years collecting 60s girl-pop records, I’ve got a pretty good antenna for the good stuff. So to put it simply, I wanted Honeybeat to be filled with the good stuff. The real meat and potatoes of girl-pop. No filler.”
The most recognizable names among the artists might be Little Eva (of “The Locomotion” fame) who does an uptempo reading of “Stand By Me,” Skeeter Davis (doing an irresistible Goffin-King number here), and Nichelle “Lieutenant Uhuru” Nichols (who knew she was a soul singer?). Also on hand are Aretha Franklin’s sister Erma and pre-Peaches & Herb Francince “Peaches” Hurd. Many of the other artists are obscure enough that their names might be new even to dedicated collectors interested in this pocket of recorded history. As a whole, the collection is to The Supremes and The Shangri-Las what Nuggets is to The Rolling Stones and The Kinks.
Whether the songs play fast, slow, or in-between, a recurring mood among them is one of female toughness. These are girls who are singing beautifully while making it clear they aren’t interested in taking any shit. There’s women who are out to “destroy” the men they want, others who aren’t having any mama’s boys, girls who don’t want to be monkeyed with, and so on. But to mix up the sentiments and keep things balanced, Brugel also included songs that find the women belting out more loving words in the direction of their love interests. One woman embraces the man in her life, despite the fact that he’s a sweet hunk of misery.
Burgel composed Honeybeat’s detailed liner notes, giving background on the artists and selections, and in many cases including comments from members of the acts. Asked for some of the more interesting and moving things she learned from the interviews she conducted, her passion for the project shows through: 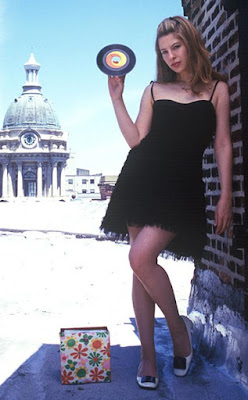 “I had the most moving Skype call with Sharon Joyce Shockley and Mona Campbell of the Lollipops (their song “Don’t Monkey With Me” is featured on Honeybeat). They were completely shocked that anyone was even aware of their group. They hadn’t even told their own children about the Lollipops! When I told them that I knew DJs and collectors around the world who loved the records they cut for RCA in the 60s, they were overcome with emotion. Tears of joy. It was really something. They said that I had given them a gift by bringing the Lollipops back into their lives. How beautiful is that?!! I also had a lengthy conversation with Philadelphia producer Jerry Ross, who produced April Young’s Spector-esque “Gonna Make Him My Baby” for the Columbia label. Jerry and April ended up falling in love, and it was such a pleasure to hear Jerry recount their love story—which lasted 25 years until April’s untimely passing.”
Yep, it’s beautiful.
– Brian Greene
© Copyright http://www.psychedelicbabymag.com/2017
Brian GreeneHoneybeatReviewsSheila Burgel