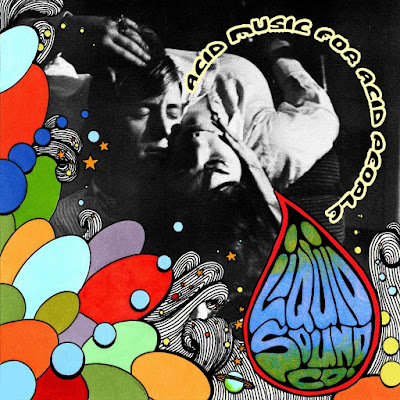 The Liquid Sound Company “Acid Music For Acid People” (Nasoni Records/Rockadrome, 2011)
There is something about third albums that show the pinnacle of a band’s talent. Tom Petty had Damn The Torpedoes, Bruce Springsteen had Born To Run, and Liquid Sound Company has Acid Music For Acid People. Most disciples of the psychedelic music of the late 1960’s try to emulate that sound, and often fail to present something new. Liquid Sound Company continues to showcase new and exciting ways to push the cosmic boundaries of music.
Unlike its previous albums, LSC present a more edgy sound on this record. The band progress from the fluidity of Pink Floyd – pre Dark Side Of The Moon – to a much harder beat reminiscent of Hawkwind. There is also a very noticeable Egyptian influence in the way John Perez plays his guitar and the overall tones of the song, particularly the first track, “Liquid Sound Freedom”.
All the song structures of the album are fantastic, taking the listener on a journey from the low plains of Egypt to the great void of space.
Overall, Acid Music For Acid People is a wonderful and excellent return to the best of what the 1960’s psychedelic music scene had to offer. LSC are the torchbearers of the underground cosmic- music scene. There is no band that can rival them, as this album proves.
A must-listen album for any acid-rock fan!
– Miles Bumgardner
© Copyright http://www.psychedelicbabymag.com/2017
Miles BumgardnerReviewsThe Liquid Sound Company