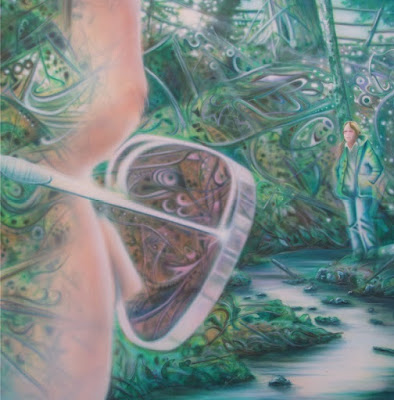 Paul Marcano and LightDreams – 10,001 Dreams (Got Kinda Lost Records, 2016)
Reissue of the 1982 self-released cassette from Canadian musician Marcano and like-minded psychonauts. Marcano was also a talented painter who painted (or projected – the photos in the booklet are a little dazed and confused) marijuana leaves on his body, as well as took a fancy to face painting and other sidelines that expressed his psychedelic inner self.

In order to keep the reissue on a single CD (or double LP for vinyl junkies), about 10 minutes of the album was edited out, but purchasers get a download coupon so they can hear the entire trip. For the rest of us, Got Kinda Lost have managed to squeeze 79 minutes onto the CD without any obvious edits to ruin the vibe, starting with the title track, a glistening, glittering arpeggio of guitars under which Marcano chants about “building islands in space” (a reference to his previous album), with references to ancient teachings, mysterious visions, Utopian dreams, and everyone living together as one. Hippie sentiments with laid back musical accompaniment very much in the vein of The Grateful Dead and later practitioners like Black Sun Ensemble and The Smoking Trees, with a generous dollop of Mooseheart Faith Interstellar Groove Band.

The instrumental ‘Stream III’ shows off some tasty Garcia-like licks, while ‘Visual Breakfast’ is as heartwarming as it sounds – a gently cascading series of guitars trickle across your ears, imposing a sense of warmth and relaxation without that nasty cough (wink, wink!). Marcano’s snappy vocals during the upbeat sections remind of John Sebastian and his good time jamboree tunes, both solo and fronting the Lovin’ Spoonful. ‘Who Is The One’ recalls moments of Revolver, with sleepy vocals, and phased, fuzz guitar solos accompanying self-assured lyrics such as “You’re the free thinking kind/and you open your mind to see what you find”.
The album’s centrepiece is the 23-minute sidelong ‘In Memory of Being Here’, which, from its title on down, explores all sides, internal and external, of the mind and its experiences in the world of multiple realities. Following the title track, ‘Being Here’, the six-part suite continues through heavily-treated sections of guitars and electronics phased, forward/backward, and most of all disorienting, as the listener attempts to come to terms with what is happening around him. It’s a trip through the birth canal, a voyage to outer and inner space, an opportunity for self-reflection to a Floyd-like musical extravaganza via segments entitled ‘Subtle Arrival’, ‘Something Out of Nothing’, and ‘Subtle Departure’. Every listener will react differently, according to his or her own temperament, but the relative calm that the piece instills will permeate from your inner core to your outer shell. For further info, check out A Cid Symphony, Book of AM, et. al.
‘Maj Moorhsum’ sounds just like the zonked-out silly psibin trip that it is (read that title carefully), total phased, backwards mindfuck that I’d be curious to hear the wrong way round – ah, if one could play CDs in reverse!) and the reprise of the title track continues it’s backwards masking guitars while Marcano chants the title into oblivion. Which is just about where I left my mind, so I’m off to that parallel universe to see what I can find.
Sadly, Marcano’s LightDreams writing partners died while this reissue was being assembled, and Marcano dedicates the album to both of them, along with fan (and friend of It’s Psychedelic Baby) Patrick “The Lama” Lundborg, who also left us during the preparation of the reissue. All parties would appreciate the effort in getting these recordings in front of a larger audience, and you will too.
Read our interview with Paul Mercano here.
– Jeff Penczak
© Copyright http://www.psychedelicbabymag.com/2016
Jeff PenczakLightDreamsReviews