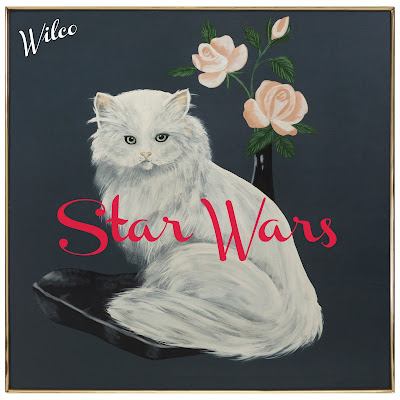 Wilco – Star Wars (dBpm Records, 2015)
Listen: https://www.youtube.com/watch?v=9n36fehFSiA
Wilco have been a standup band for far longer than I care to remember, releasing consistently good product, though with all songs never seeming to be created equal on albums, it always knocks me back that they are one of my favorite live acts.
And this brings me to Star Wars, and the excellent raves this downloadable release is getting, with some seeming to tout that Wilco have just stepped through the door, creating a new sound for rock n’ roll, one that others will be following and aspiring to.  However … I think not.  I can’t be the only person walking the planet who thinks this is not a very good album, where even using the phrase “very good,” is attaching too much praise.
If I were to use the Star Wars theme, I’d have to say that, “The new album Star Wars by Wilco is a ragged run though a frenetic meteor laden minefield of dangerous sonic musical juxtapositions and frantic washes of galactic proportion that should have terminated somewhere on liftoff, yet have nevertheless managed to propel the band into the outer regions of Pluto’s Kuiper Asteroid Belt, where they have not only managed to survive, but are sending back soundscapes from the far distant beyond.  I can only conclude that the music found on Star Wars has morphed in the four light-hours it takes to beam information back from such distances, and has been electronically distorted, either on transmission, or reception.  I for one have run a diagnostic on my McIntosh Amp, and all systems seem well at my end, leading me to conclude that Wilco are suffering from deep space dementia, and we should find it in our hearts to forgive this band of roaming heroes, should they ever manage to set foot on terra firma again.“
For those who find this outing pleasurable, I am more than happy for you … though, the rational part of me would suggest that there are too few who would stand and say “Not so fast boys, I’ve been around the block more than once, this is not my first rodeo, and this Space Cowgirl will not be taking this spacewalk.“
Review made by Jenell Kesler/2015
© Copyright http://psychedelicbaby.blogspot.com/2015
Jenell KeslerReviewsWilco