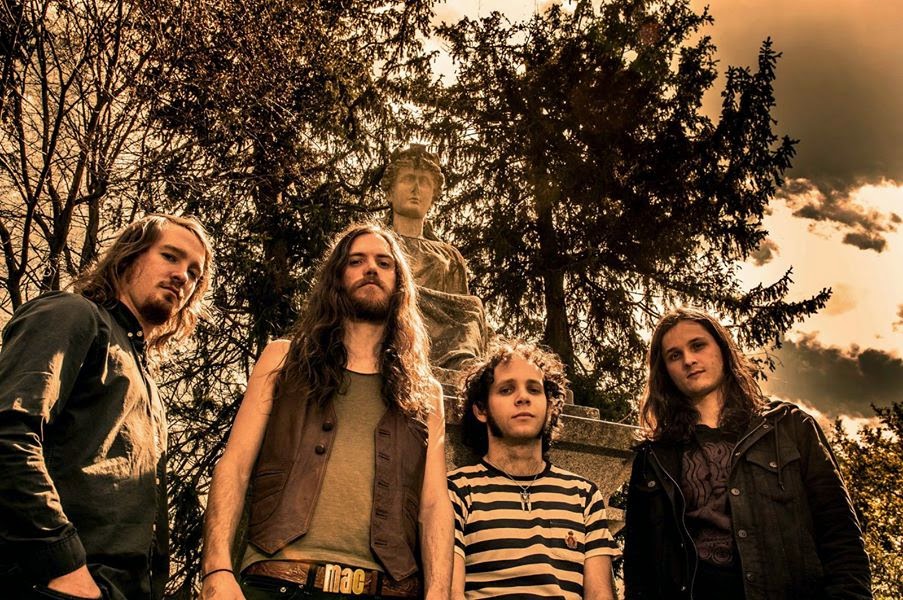 When I discovered, that “The Flying Eyes” quartet
would play in Berlin withing their new European tour “Baltimore Invasion”, it was
natural to buy plane ticket and prepare myself to visit the capital city of Germany, with its Wall, unofficially free-of-charge-metro and
unexpectedly good coffee.
So on October 24th in Cassiopeia club (Kreuzberg) I made an interview with members of Flying Eyes.

You used to play in USA, and now you are in based in Berlin.
What’s the difference between American and European public?
So far we’ve got much better success in Europe and much more interest from people, better
crowds, shows etc. By far this European tour was full of well attended shows, plus we went to a few new places, like Slovakia
and Luxembourg – we haven’t been
there before and therefore shows weren’t so well visited. But all the shows we played in Germany and other German-speaking countries were pretty
well attended. There are lots of music fans in Germany.
Have you ever played in almost empty clubs?
Definitely. We played shows in front of just a few people
sometimes, it certainly happens. You know, you can get out from a small area in America and its’s hard to establish
yourself outside of this little region. 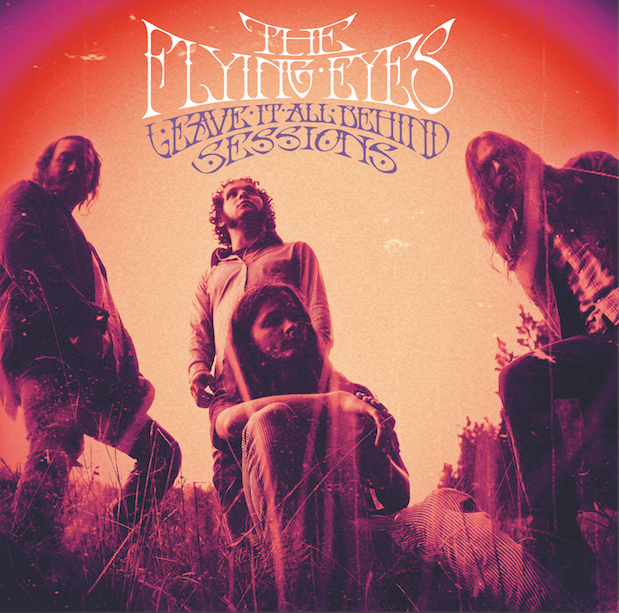 Did you have any troubles with getting to Europe? I’m guessing incidents like missing a plane or loosing documents didn’t happen?
Elias: There were many stories in our
history, the worst one, the absolutely epic one was connected with the tour we did in
Europe back in 2011, when we got sold fake
plane tickets, stuck in airport and had to buy new ones. Yes, in the end everything worked out, but at certain point there
was a pretty scary moment, when you were staying in the airport, stressed and
confused, didn’t even know you
would be able to make this tour happen. 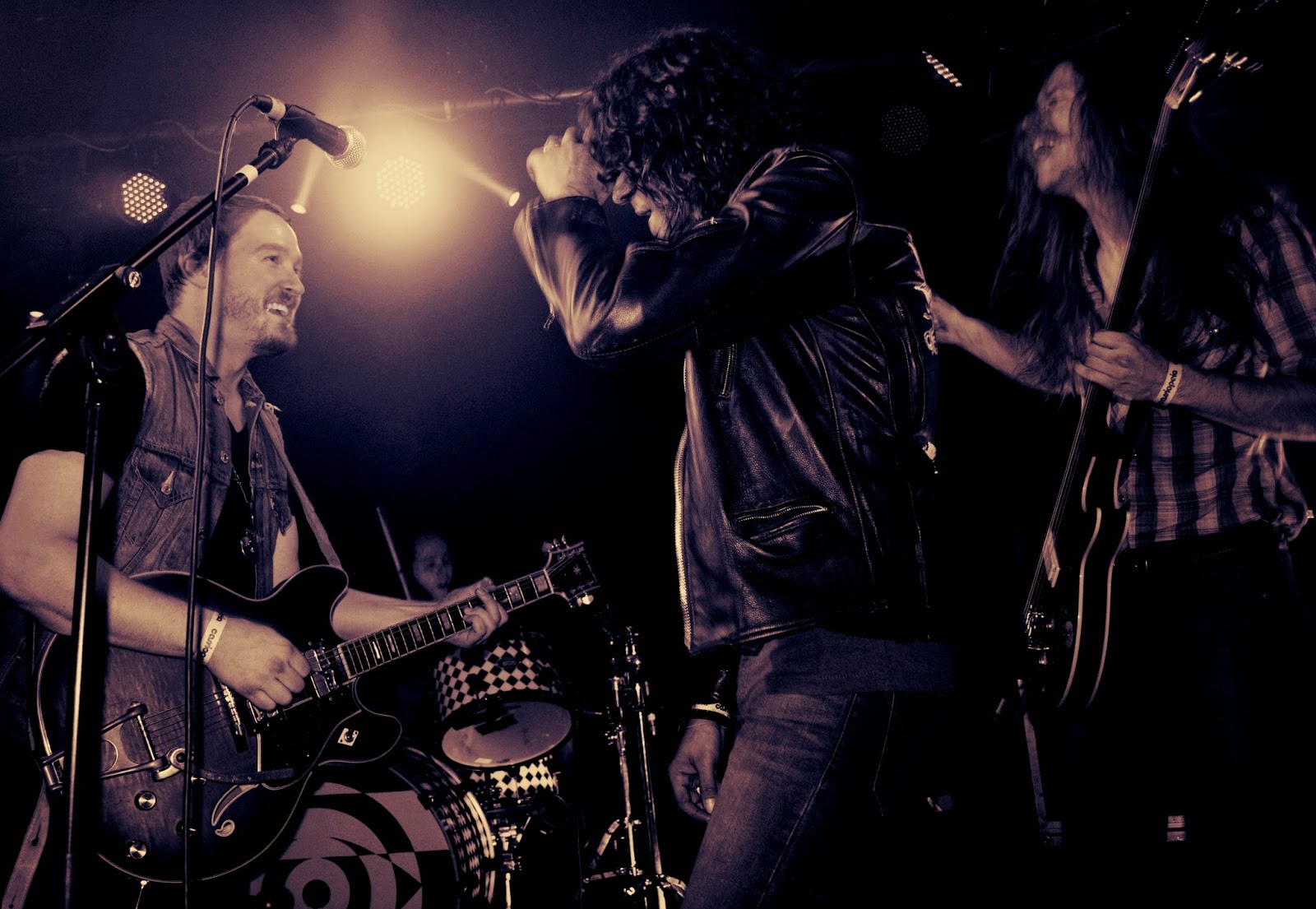 © Olga Batyreva
Was it hard to become a bit more well known in your area? In Russia it’s really hard.
Aw, but what about “Pussy Riot”?
OMG, that was long time ago…

But “The Pussy
Riot” are still in the news! By the way, do you know they are filming in
the new season of “House of Cards”?
Elias : I’ve even been crushing on them, on one of the girls.
You are having “Lazlo Lee and The Motherless Children” as a supporting band
on this tour. It was hard to find information about them. Are they your friends?

Yeah, they are really good friends from Baltimore, we played for the first time together. Discovered
each other in 2010, I think. We played a
show with them in a small strange underground venue, and we all had a lot of
drugs … it was just like: “OMG, we
NEED to be together”, and after that we had lots of shows in Baltimore together. Over the years we were looking for a good opportunity to bring them
here to Europe, and finally “Lazlo Lee and The Motherless
Children” are having their first
European tour. They are a great band and good friends. But even more important, they are awesome band that deserves to
be heard.
Mac: We sound quite similar in one way, but there
are many differences nevertheless, so we are actually quite complementary. 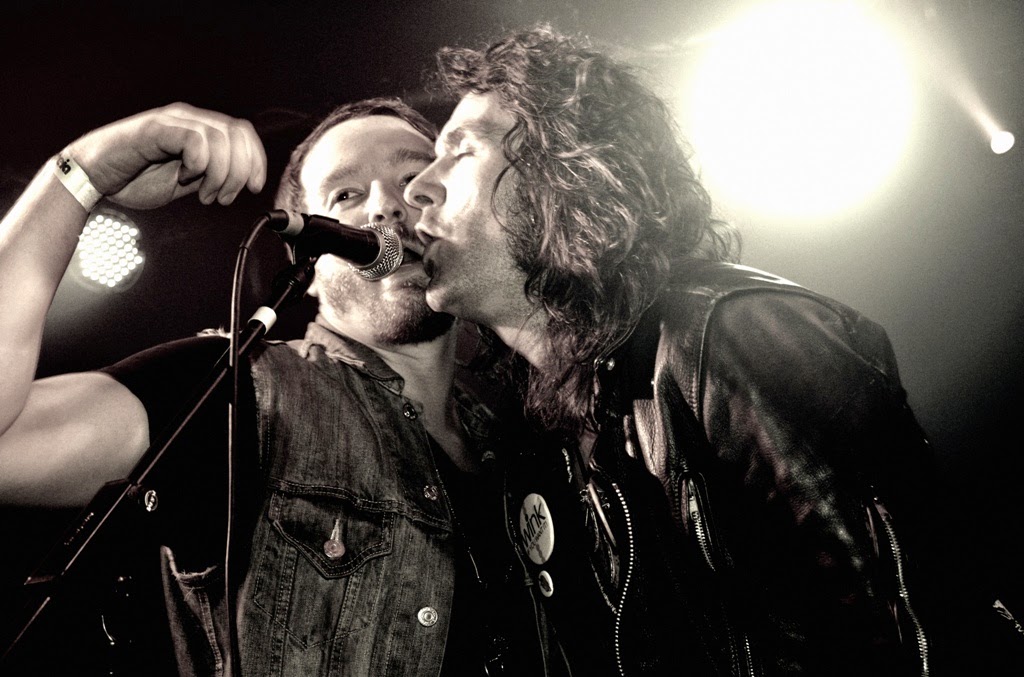 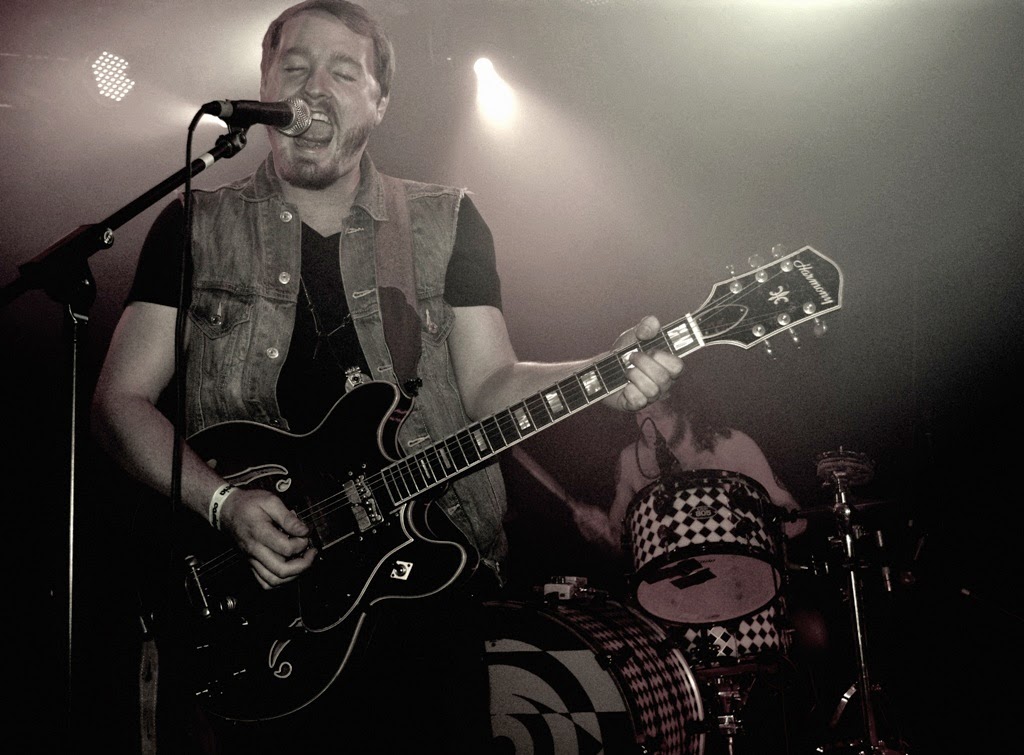 © Olga Batyreva
Your new album is much heavier and more doom oriented, than your previous work. Was there a special reason for this change in your sound?
There are always
different periods, when you certainly listen to different styles of music, get interested in other things… It’s kind of growing.
Elias: I like bands, which are changing. When every album has same sound it can get boring. Everybody should do what they want, and what they feel. Some
bands, for example our good friend Parker Griggs, guitarist of Radio Moscow is really true to do that ’70s “hard-drugs
sound”. That’s his natural passion, the thing he desires to do. For us, we just did the same thing – we made music we are interested in and
passionate about. We did not make
conscious decision to change our genre. It was all natural, it happened by
itself. And it is changing with our lives changing. When we play our old stuff, it works well together.
Did you make that playlist, that was in air before your show?

Yes, actually we created that playlist, thought that it would
be good introduction to our set. On this tour it’s being the same one on each show.
I recognized Ty Segall
and Pentagram. What else was there?

Mark Lanegan, The Entrance Band and the actual intro to
our set, that track with only solo singer, was just really old blues…
Mac: I found that
recording in the collection of old film recordings from the Appalachian mountains. It’s called “Conversation with Death” and it was record by the singer from Mountain Communities.
Where do you usually find new music?
Mostly from the bands you are playing with. We played with “Mars Red Sky” on this tour, French collective. There were a lot of bands we were
supported by on tour, but MRS were one we felt like “Wow, this guys are
really cool”. They have their original sound and we were quite impressed.
What’s your favorite album you recorded?

Every album we pulled out is a favorite, every time it
represents the condition during some period. But the least pressure, that was
put on us as a band, was spent on very first album, because we were careless and free, just did what we wanted to. So yeah, maybe the first album is a little
bit naive, but cool anyway. But on the other side, Lowlands is much
more confident work of ours.
And what about cover songs you’re playing?

We covered “1969” by The Stooges – the last one, when we
returned to the stage and Lazlo Lee joined us there.
Was there a song, that came so spontaneously to you, that you wrote it in just a few minutes?
“Raise Hell” came from nowhere. This is song we wrote in a couple of hours one
day. It is actually b-side song of the album. We came
together and it just exploded. Very unusual, because commonly it takes months to finish a
song.
What can you say about your art work?
Kiryk Drewinski made art for our first and second album. He is from Germany and is also a musician. Right now he’s playing with Wedge. We played twice with them actually, and he often give us lots of ideas and right direction. 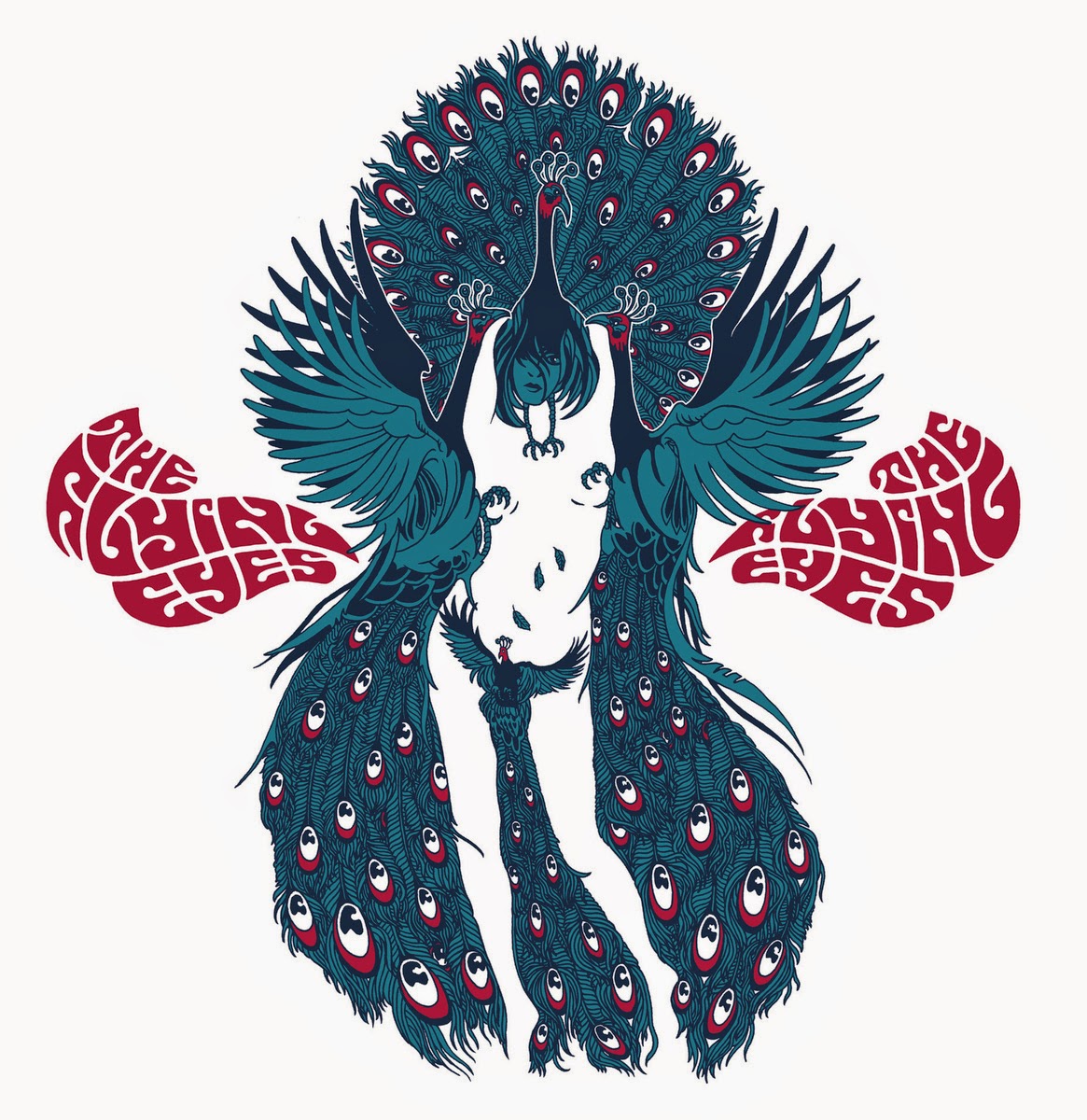 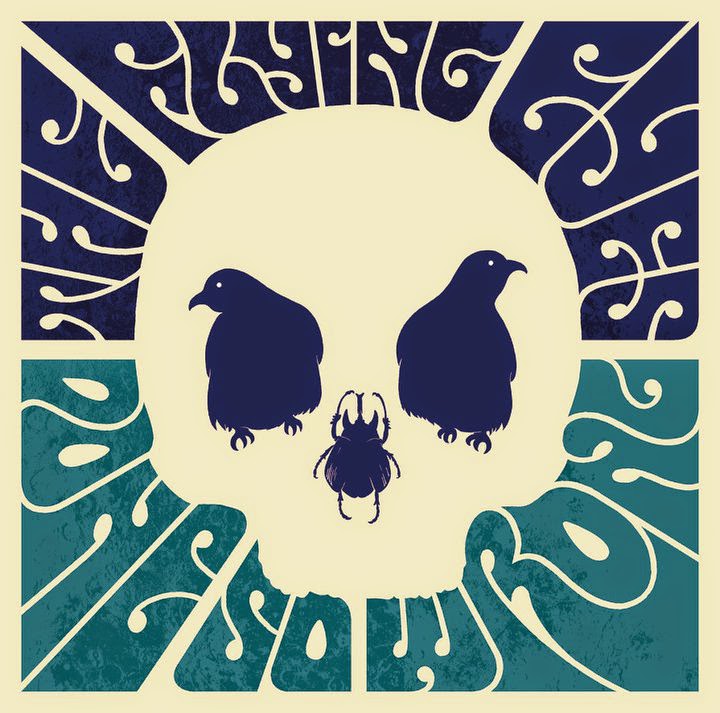 Mac: Lowlands art is a work of local Baltimore
guy, he is actually my boss at work, Geoff Danek. He found a bunch of old photos and made them moldy, added
slides, aged effect, to reach this crazy colours etc. It was not made by computer. 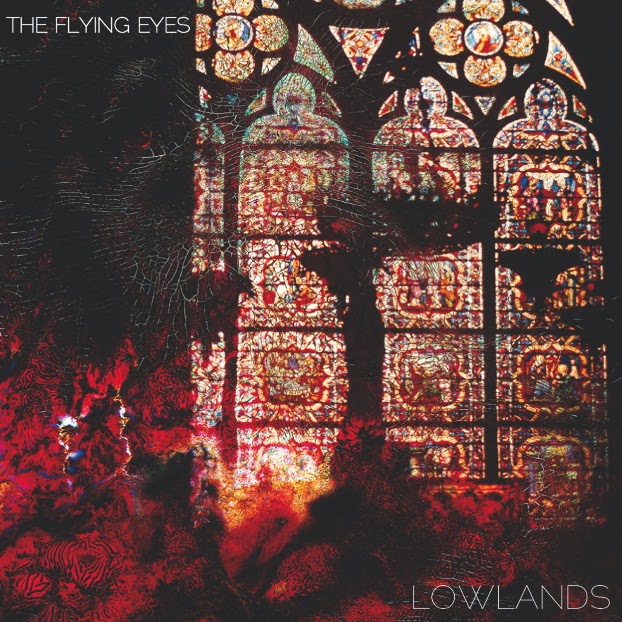 Damn, I’ve forgotten the next question…
Mac: Aw, I know what you mean… Remember I was on the stage a few shows ago, wanted to say  “It’s great to be back here from the
last time…” – and could not
remember the name of “here”…
OK, I’m back. Are you keen to improvise?
Various. Some parts are improvised. You should find the right mix between. It’s good
to take what’s on the album and then if you are comfortable with that you can escape a little bit, but after that you should come
back to it. For example, sometimes we rework and rewrite songs on the stage and they sound quite different. It happened with
“Death Don’t Make Me Cry”.
Let’s remember, that show where you played with a saw?
Adam: Well, it all started when I was at the folk festival
in Virginia.
When you were  young
and innocent?
Adam: Yes, I was younger, and I saw this girl, playing a saw.
That was the most beautiful thing I have ever heard. So I went to hardware
store to buy a saw, and used my mom’s old violin bow. And then I thought why not to make
it electric? Electric saw, why not? With the right effects and revers it worked
very well.
Your favorite model of guitar?
Adam: Rickenbacker, the most amazing guitar I’ve ever
played, all the way!
And Gibson SG, which I dropped on this tour and it is fucking broke, so I had to use glue to
fix it again.
Do you remember your very first guitar?
Mac: I had a Rogue bass.
Adam: Fender Stratocaster, Mexican one, it’s still here in
Berlin, in our manager’s house.
Mexican?
Mac: Yes, Mexican
stuff. They are actually quite good. Also Aspire, Japanese guitars are as good as American Fender ones.
What occupies your life beside being a musician?

Mac: I work in a
rock-n-roll kind of bar-restaurant. And usually there are lots of shows with different bands.
Adam: Normally when I’m at home, besides music, I work in
pharmacy.
Is there a local venue, that you consider as your home?

Yes, suppose, “Golden West” can be named like
that. It’s a small venue near our house.
Have you ever ‘googled’ yourself?
Everybody does! I even googled you, BTW. Sure. You can read
reviews of your work, check new videos on YouTube or anything you haven’t seen before. Usually we look for what was posted about us. Sometimes you find bad reviews, which are total bullshit, so yeah occasionally you have to tear them down. Bad reviews are usually better than good ones, ha ha! 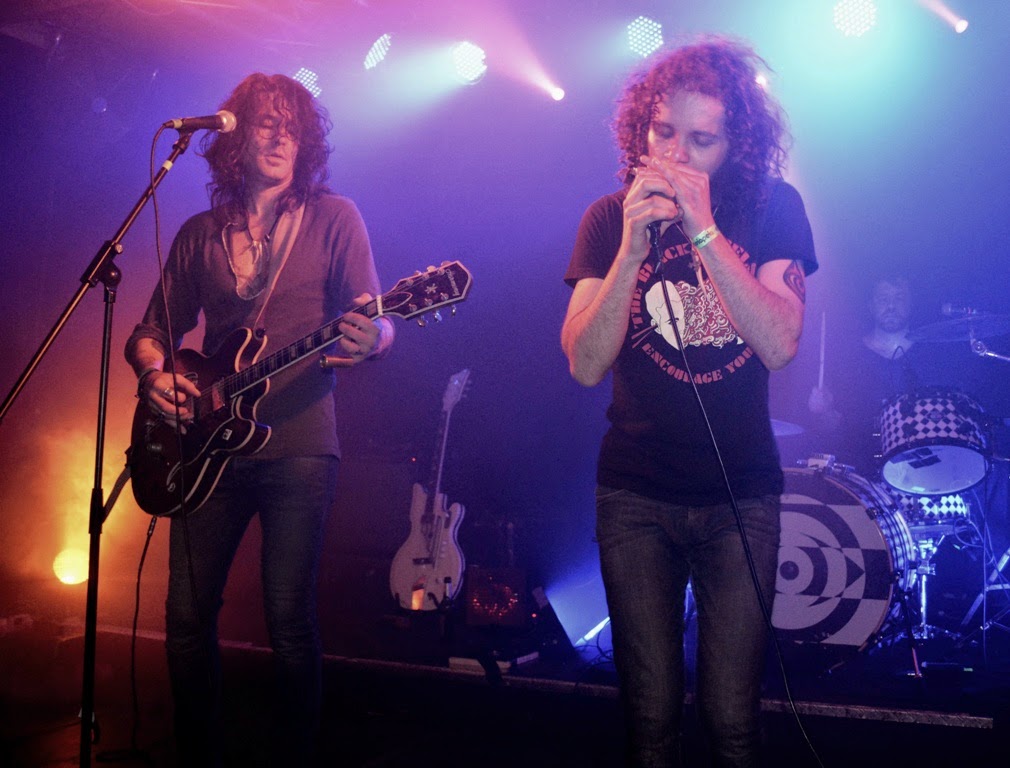 © Olga Batyreva
Can you describe your technical side of music making?
Adam: On tour I use one processor (which is mainly
focused on my spacey kind of settings),
then all my distortion and fuzz, all my tone comes out from my fuzz pedals, which are next to that.
Mac: Hah, Baltimore pedals.
Adam: Yeah, I have 3 fuzz pedals.
Do you think there is something you might experience and after that you can say: “I’ve done everything I wanted to”?
Adam: Before we came to Europe, I wanted to do all the stuff that we are doing right now, but after experiencing all this you just want to do more and your expectation are higher. I really like, that we are seeing a lot of the world and we went to India and looks like we’re gonna play in Brazil. I don’t know what to expect next. It’s probably normal human condition, to always want more. 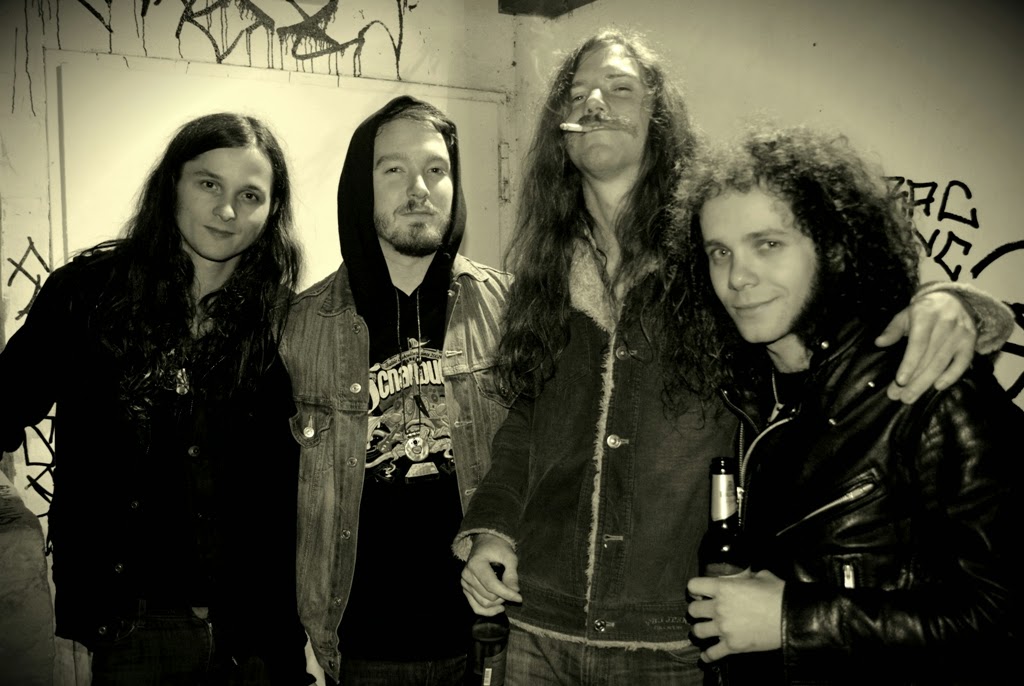