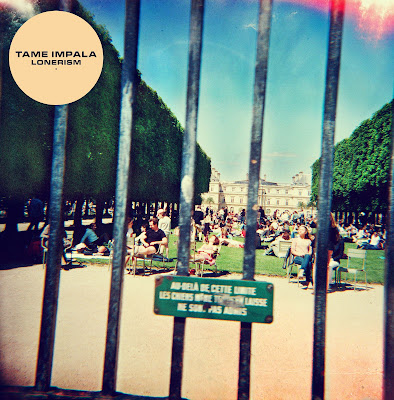 Tame Impala “Lonerism” (Modular, 2012)
Following up his Album of The Year-winning
debut Innerspeaker, Perth multi-instrumentalist Kevin Parker went for a more
accessible, poppier sound on Lonerism. The stomping opening to “Be Above It”
features the ambient sound of someone walking down the street past his hotel
and this thematic use of found sounds features prominently throughout the
album. Todd Rundgren was another huge influence, particularly the cheesy,
disposable synth pop of his early 70s albums Runt and A Wizard, A True Star.
Bubbly confections like “Endors Toi” and “Apocalypse Dreams” also display an
appreciation for the quirky, Beatles-cum-Beach Boys effervescence of the
Elephant 6 stable of artists such as Olivia Tremor Control and the
walking-on-air ear candy of Pink Hedgehoggers Cheese (cf. Enlarge Your Johnson)
and Garfield’s Birthday (try Let Them Eat Cake).
Parker’s
soaring vocal harmonies all seem to be treated with treacle and effects that
give the impression they’re floating on a breeze from somewhere down the block,
catching your attention here and there to interrupt your daily revelry and wrap
your troubles in a marshmallow overcoat. The slow-motion effect of swimming in
meringue permeates dreamy, 60s’-flavored concoctions  like “Why Won’t They Talk To Me” and “Feels
Like We Only Go Backwards”, leaving a pleasant John Lennon-fronting-Strawberry
Alarm Clock taste in our ears tempered with liberal doses of like-minded,
latter day enthusiasts like Anton Barbeau and Norwegian Øyvind Holm (cf.
Dipsomaniacs).
Minor
reservations about the tinny drum sound, Parker’s unimaginative drum(machine)
fills, and the occasional production overindulgences (some tracks like “Keep On
Lying” and “Nothing That Has Happened So Far Has Been Anything We Could
Control” just go on interminably with little more than loopy sound bytes
or overdramatic drumming to add to the proceedings) can be overlooked in favor
of the enjoyable trappings enveloping most of the tunes, particularly the
unforgettable, brain rattling “chunka-chunka-chunka” drive of “Elephant”,
perhaps his most familiar creation so far.
A
worthy follow-up shows that Parker has not lost his touch for crafting
wonderfully memorable pop tunes, but he has to be careful not to fall into a
rut and risk rehashing the same material. His decision to record everything
himself yields an inherent sameness to his albums that might benefit from the
addition of some of the live band members to the recording sessions to expand
the bass or drum sound and relieve some of the potential monotony. But as long
as the listener understands what’s in store, there’s no reason Parker’s Tame
Impala releases to date can’t stand proudly alongside the best of other “one
man bands” like Rundgren, Prince, Nick (Bevis Frond) Saloman, Karl (World
Party) Wallinger, Kurt (Ultra Vivid Scene) Ralske, et. al.
Review made by Jeff Penczak/2013
© Copyright
http://psychedelicbaby.blogspot.com/2013
Jeff PenczakReviewsTame Impala