The first time I saw the name Blue Cheer was on a French
magazine called Metal Attack. The year was 1984. The first thing I actually
read about them was a few years later on a book about Hard Rock and Heavy Metal
and saying ‘Imagine three acid crazed bikers on stage and you will only be
starting to appreciate the headaches that Blue Cheer have caused throughout the
years’. Tales of disintegrated dogs in front of amplifiers and recording the
second record outdoors due to extreme volume that made the studio walls shake,
further enticed my curiosity. Even Lemmy said they were loud!
Fast forward to 2008. The place, Azkena Rock Festival in
Vitoria/Gasteiz, Spain. I was living in Madrid back then and as soon as I found
out Blue Cheer were playing, it was a no brainer. Also on the bill were The
Sonics, Ray Davies, Danko Jones, Sex Pistols and a few other renowned names.
Blue Cheer were to play after glam rockers Hanoi Rocks on a
different stage. As much as I was enjoying the glamness and the bizarre mix of
Goldie Hawn meets David Lee Roth of singer Mike Monroe, my pilgrimage towards
the second stage began halfway through their set. 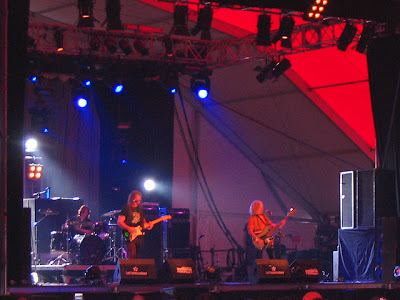 I was one of the very first persons to get there so I still
caught a little bit of the line check and positioned myself on the first row smack in the middle of the stage so I could
get a full view of the show. Of course by then I already knew and devoured all
of Blue Cheer’s records. Even the ones people usually say are not that good.
Expectation was high and I thought ‘Will I get what I’m looking for? Will it be
loud as people said?’. Well, it was loud alright…
The setlist was highly drawn from ‘Vincebus Eruptum’ and
‘Outsideinside’ with only one track from what would be their last record ‘What
Doesn’t Kill You…’. It was a dream setlist from psychedelic sonic heaven. All
the songs you wanted to hear them play, they played. From Parchment Farm to
Just A Little Bit, they played just about everything from those two first
records.
Summertime Blues was, of course, one of the major highlights
with everybody going wild. For me though, the true highlights were Come And Get
It which was played with such venom and ferocity it sent chills down my spine.
Gypsy Ball also had the hypnotic drawl of the original recording while Out Of
Focus remains the coolest song to swing your hips and to freak out during the
solo.
Oustanding were the remarks of Dickie Peterson, specially
before Doctor Please where he said there was a rumour that the song was about
the drugs. He dispelled that rumour saying it WAS about the drugs. I felt
drugged alright… Before ending the show, in between some gum chewing
activity, Dickie Peterson said:
‘On the guitar (chew chew) Andrew ‘Duck’ Macdonald is gonna
do sumthin’ (chew chew chew) that’s gonna blow your mind. On the drums (chew
chew) Paul Whaley is gonna do sumthin’ (chew chew chew) that’s gonna blow your
mind. (chew chew) I’m Dickie Peterson (chew chew chew) and I’m gonna blow your
mind!’. With that, they launched into Second Time Around. Believe me, my mind was blown with a relentless sonic
juggernaut that took no prisioners and had no mercy on anybody’s ears.
As for the band, Andrew ‘Duck’ Macdonald performed with all
the fuzz/distorted feedbacking guitar that made justice to the original
recordings. Paul Whaley was still the heavy hitter, looking like he was on the
verge of a heart attack but still bashing those drums like it was 1968. And, of
course, Mr. Dickie Peterson was on top of the game with his graspy voice and
his solid bass playing.
When it finished, it was time to run and catch The Sonics. I
was surprised to see an ocean of people behind me since I got there early and I
did not realize the people that started arriving afterwards. As for The Sonics,
as much as I like and respect them and their music, nothing could really
capture the raw and sheer intensity of a Blue Cheer show. There was nothing
they could do.
Blue Cheer had blown my mind…
http://www.youtube.com/watch?v=HBuMbt8WZHw
‘The International Encyclopedia of Hard rock and Heavy
Metal’, Tony Jasper & Derek Oliver (1991)
Column made by Carlos Ferreira/2013
© Copyright http://psychedelicbaby.blogspot.com/2013
Blue CheerCarlos FerreiraColumns