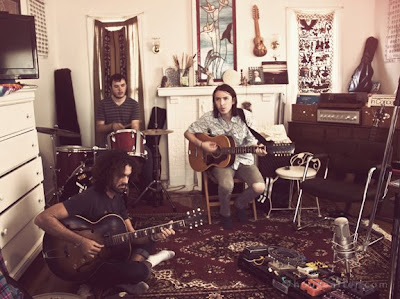 Nacosta is a psychedelic folk rock band from Los Angeles, CA whose music bridges a gap between Nick Drake’s fingerpicked introspection and Sonic Youth’s in your face noise collages. In September 2011, after months of recording, Nacosta self-released their debut EP, “Wilderness City,” on their own record label, Ancient Conductor Records. In March 2012, Nacosta will release their second EP and go on a southwest tour to Austin for SXSW.
Interview:
Hi guys, how are you? Tell us about your band, where did you start?
Brandon: Hey Klemen we are doing good thank you.
Shane: The band Nacosta had been around previously before I had joined, with Brandon playing with different people, although it was very different music. I joined the band  back in 2009 with the common goal of wanting to play creative music that you don’t hear everyday. We both shared most of the same influences such as Elliott Smith, Radiohead, Beatles, My Bloody Valentine, Autolux, Grizzly Bear, etc. With that in mind I knew that this was going to a great band and that I would really enjoy it.
Brandon: And we are brothers! Literally. We are from a suburb just north of Los Angeles, although there isn’t a lot going on in our town, so we mostly play in LA and it is where most of the people we play with are.
You released your debut EP, “Wilderness City”. What can you tell me about the material on this EP?
Brandon: Yeah it was nice to release that as we had most of those songs for quite some time, a few like “Blade of Grass” and “Clear” for over two years. We actually had to record the ep twice as our first sessions did not turn out good with someone we worked with, so we did the whole tracking ourselves a second time. The songs were mostly recorded at the rehearsal space we had in North Hollywood. We had to track in between crazy death metal bands, it was funny.
Shane: The first track on the EP titled “Take” was an old idea I had from a few years back in which Brandon expanded upon and helped finish the song. My original vision for the song was a shoe-gazey psychedelic song, with lots of textures and effects going on. I think we achieved that pretty well, it is definitely one of our heavier songs. The material on this EP has a nice blend of acoustic and electric songs and features some nice vocal harmonies.
Brandon: The only song that was actually new at the time was “New Magic”, which actually replaced an old song we had called “UV”, which we demoed but haven’t released. For the songs on the cd we were augmented by Anders LaSource on keys, harmonica, percussion, mandolin and harmony vocals and Keith Ely on bass. The overall mood of the album is very atmospheric and introspective, psychedelic 🙂
The thing that is interesting in your music is you are a folk band, but we can also notice influences from Sonic Youth for example…
Brandon: It’s interesting because we have always felt a little strange about labeling ourselves as any style in particular, yet we do so because it is easier for people to get a sense of our influences when we say psychedelic folk rock. We definitely draw a big influence from folk and acoustic music, however we draw just as much from heavier rock and shoegaze as well as jazz and electronic. I really love exploring so many different styles of music, yet no matter what I am listening to I always seem to write stuff that kind of mixes Neil Young with yeah something like Sonic Youth (my first concert) or music that mixes in all different shades of expression, dissonance and prettier stuff.
Shane: I think we both love noisy melodic pop music such as Autolux or even the Beatles for that matter. A great example of a noisy melodic player is Jonny Greenwood from Radiohead. He comes up with the most interesting parts combining noisy dirty effects with beautiful melodic lines.

In March 2012 you are planing to release your second EP. Would you like to share a few words about it?

Shane: We are very excited to release our second EP at the beginning of March. We both have grown so much as musicians since our last EP and it’s very rewarding to us that our music has continued to evolve. We want to involve as many different influences and styles in our music to create something of our own. I feel that on this EP, we have branched off into different styles which have opened up new doors for us. I look forward to sharing this EP with all of you out there. 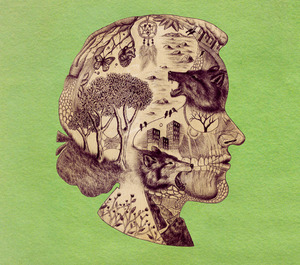 Brandon: Yes, we are recording the album with our friend Tyler Davis, who Shane went to school with. Just today we recorded the drums at this big church in Los Angeles that Tyler was able to procure. The drums sound huge in that room, Bonham-ish we hope. The ep does not yet have a name, but it will be between 3-4 songs, released on March 6th. Our first ep actually took a total of 6 months or so to record because we did a lot of it ourselves, outside of mixing and mastering. This time we are doing it in less than a month.

What are some of the future plans guys?

Shane: Well after we return from our tour we will start discuss plans for our debut album. Our plan is to spread our music to as many different people that can appreciate the music and enjoy for what it is.  We are also trying to get into some smaller festivals and link up with some other bands. 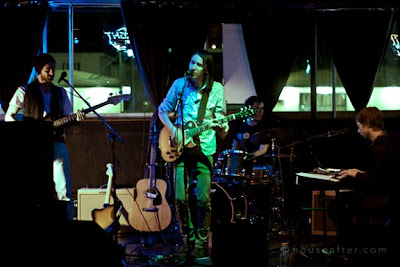 Brandon: To tour the world man!! 😉

Shane: Hi fellow Psychedelic Baby Readers,
I hope you have enjoyed this interview as much as we did taking part in it. Thanks for checking out our music!
Brandon: Eat an apple a day, or maybe it was listen to an apple records album a day will keep the…ah I forgot it. Seriously try to do something creatively stimulating everyday, even if for only a little while. Write a poem, paint a picture, sing a song, something that will stretch your imagination, as that is the place that your dreams live…ahhhh.
Thanks Klemen
http://nacosta.com/ 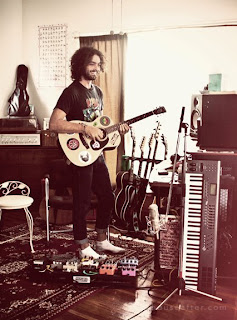