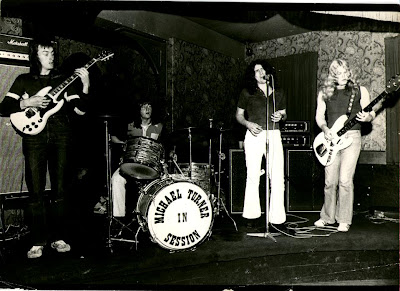 Interview:
1. Thanks a lot for agreeing to this interview, Michael! I would like to ask you first where did you grow up and what are some of the early influences you had back then as a young kid and later as a teenager?
I grew up in a place called Innisfail in far north Queensland and was around before rock started . As a child I could sing, I came from a family of singers but was pushed into choral play type stuff ,then one day I heard Elvis Presley and then Little Richard who really blew my mind and that was that. At Sixteen I joined my first band in Cairns just north of my home town, it was called Michael and the Mustangs we were the top band up there but just playing hit parade covers at dances etc. then finally I found direction as Jimi Hendrix and Cream and others came along.
2. Were you in any bands before forming Michael Turner in Session? Any releases perhaps?
I left north Queensland in 1969 and brought a band with me to Brisbane called Force V we were playing covers but it was more blues and power house rock we had come from the country to the city to find bubblegum music was raging we created quite a storm playing blues and wearing far out clothes we became a bit cult the pop bands hated us .Unfortunately it folded and there were no recordings done.

3. When and how did you start your band? Any memories from some of the early sessions you had?

I wanted to try a solo career but was enticed to join this band and they said just put your name in front of it , they were called Session and that’s how it began.I have great memories of those early days as Led Zeppelin had just taken the world by storm and I had the band to play it and I had the voice to sing it , we became very popular fast ,I know we were only covering but no other bands could manage it in those days and it really kick started us (my thanks to them especially Robert Plant).
4. I would like if you could tell me about your releases as the band. You never released an LP, just one single 45’s called Pattern of My Life / Just Around Midnight on Havoc Records, right? Would you like to share some of the strongest memories from producing this single?

I moved the band to Melbourne in 1970 as it was the music capital of Australia and it was all happening we were playing along side the top bands in the country and got signed up with Havoc records, Just Around Midnight / Patten of my Life

were written to suit what the record company wanted they didn’t think they could sell what we were playing live which was heavy rock blues  and then the labels were attached back the front which stuffed it for air play .It ended up on a copulation album called Australian Rock 71-72 Collectors Album which had big name band names like Billy Thorpe and Wild Cheeries and was a hit. My strongest memory of producing it was working with great engineers and I was very deaf and how they helped me get it done thanks to modern technology I have some of my hearing back which Iam grateful for. 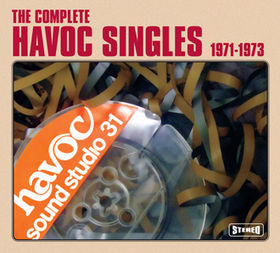 being the opening band was a privilege as it has become legend in Australia .50,000 people attended which was big for those days and even people who were not born then have heard of it .I guess for me it became the hit record I never had.I never got to see the whole festival as we had to go to Adelaide to do another one the same weekend there was 10,000 there . 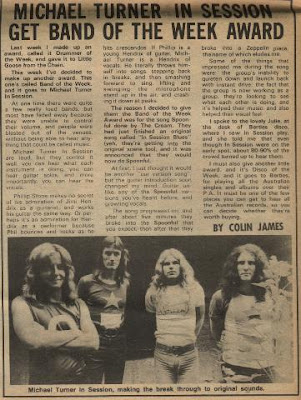 6. Where did you tour and again if you have some interesting touring/concert stories to share, that would be really great to hear too!

Being based in Melbourne our main touring was to the other capital cities in our country not many stories to tell but one night Robert Plant and John Bonham turned up at our gig after their concert ,I think my legs went to jelly it was great to meet them . In later years played with Johnnie Johnson and 10cc . In 1972 also I won Australian best Vocalist in an event called Hoadley’s National Battle of the Sounds. I had a wife and young family and in 1973 called it quits and came back to Brisbane to raise my family.

7. What happened next?
In 1995 I started a blues band with the same name which went till about 2000 and also toured back to my home towns in north Queensland as a solo artist , have been doing that until last year 2010.
8. What are you doing these days?

Currently I am preparing to do what will probably be an EP recording of about six songs I have my original drummer Paul Olsen who is on the You tube films . Have had a lot of response to our version of Southbound Train even though it’s not ours may redo that as it was recorded studio live ,and add a few orignals . I’m getting on in years but the voice is still the same and blues has no age limit so I’m still battleing on.
Thanks and Cheers  Michael. 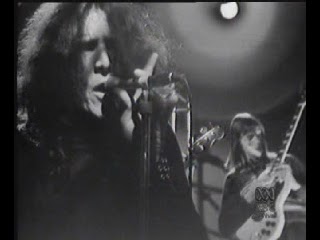