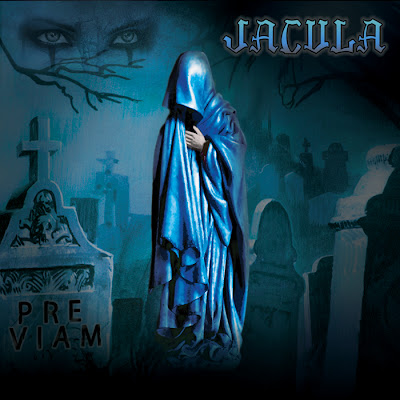 Jacula is back! Again, they emerged from the deepest abyss of hell, sailing on the wings of a new sound, but still driven by the wind of old inspiration. This new sound is wonderful – soothing sounds floating quiet and shy, gently bumping into melancholic melody, but the tones and melodies gradually become more threatening, even defiant. In those moments, their music indicates me to remember  Milton’s Satan, who first looks plaintively at his fall, but then curses sun and welcomes the horrors of hell saying that it is better to reign in hell than serve heaven. Unlike their debut, in which gloomy and anxious sounds run, painting the burial atmosphere, causing in many listeners a sense of fear, the sound of the album is much more eclectic – the atmosphere is the same, but the music itself except unique sound of sinister organ contains scattered elements of Renaissance music (Jacula is back) and gregorian songs (In Rain), metallic riffs, and very tasteful guitar playing (Bartoccetti is truly the master), whose solos in some magical moments literally explode. Some parts of the album are reminiscent of the tasteful and unpretentious prog  of the Swedish group Ragnarok, and in some moments melodies reminiscent of the melancholic and emotional musical expression of Loreena McKennitt (Blacklady Kiss). Especially scary sounding are the demonic voices that appear here and there, and sometimes cross into a cry – it is perhaps unfortunate moans of the tortured soul of Hell fire, and maybe even crying because of labor pains of a woman who gives birth to the Antichrist, who knows? In any case – if you want to experience contact with the other world, a world of darkness, this album will be an excellent guide – like Virgil will take you through hell, to show you the tortured soul, the sad soul, the defiant soul. They will show you the beasts of Hades and sing their song. Forget the silly clowns like Mercyful Fate and Venom.. Because THIS is a real thing!

Review made by Martin Okun/2011