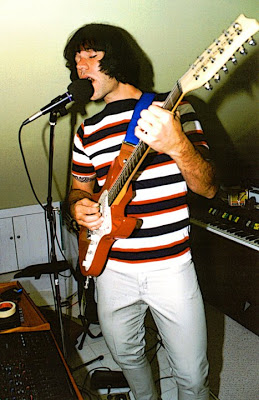 Thank you very much for agreeing to this interview. Would you mind introducing yourself?
Hi Klemen,
my name is Darren Thomas Brennessel from Rochester, NY USA.
I am the one man band called McFadden’s Parachute. I play all instruments, write all songs (except the occasional cover songs I record) I sing all songs, do all the recording and mixing and do all the artwork and graphics for my projects.
So, how did you start your music career?
I began collection 60’s music in 1970 when I was 6 years old. After listening to this music for the next 15 years, I decided I could create this kind of music. I felt a need to create the sounds I was hearing in my mind. I had music and lyrics that needed to be recorded.  So I first taught myself to play drums, joined a neo-60’s garage band called “The Purple Flashes” in 1989. I then taught myself to play guitar, bass, organ and learned how to record multi- track analog and built my own recording studio in a storage facility. I recorded my first “McFadden’s Parachute” album there in 1989 called “Physical Culture Sanitarium” and have had 28 official full length McFadden’s Parachute releases since then. I also continued to play drums in other 60’s garage bands such as “The Quatloos”, “The 4 Hestons”, “Cousin Al and the New Generation”, “The Lost Marbles” and currently play drums for “The LSD Enigma”. In 2004 I was in Sky Saxon’s Band “Green Forests” and we recorded a full album here in Rochester. It has been sitting idle until our producer can find the time to edit and master the 100 hours of tape we have. It promises to be classic Sky Saxon album and will be quite a tribute to our friend Sky.
What is your main influence? That’s probably pretty obvious, but let just say which artists particularly?
I was very influenced by “Faine Jade”,  Merrel Fankauser, The Cykle The Seeds, The Jefferson Airplane and all obscure 60’s garage bands. I must say thought that the 80’s neo garage scene was quite good and bands like The Hoodoo Gurus and The Smithereens very much inspired me!
You released Black Fuzz in 2001 and Hammerdown in 2006. What can you tell me about making this two albums? Are you satisfied with how it turned out?
These were very difficult to record, as all self recording projects are where I do everything. But these in particular because I really focused on trying to recreate the sound of 1967-68 using the recording techniques and mix down techniques of that era more so than any previous project. And the complexity of the cover song choices really challenged my playing ability. I don’t read music or understand chord structure. I only play by ear. Even when I write my own songs. But I was VERY happy with the results and I think Black Fuzz in particular really captured my idea of what and album would sound like from 1968. I really believe in Time Being Relative, so in recreating the atmosphere of the time, in my studio,  to record this album Black Fuzz and Hammerdown, I really feel like I was in 1967-68 while I was creating these albums, so in many ways, I feel they were recorded THEN!
What are future plans for the band? New album? Tour?
I occasionally get my musician friends together to play live shows. In 1999 and I 4 man line up that toured the NE of the US and we were fortunate enough to get booked at CBGB’s and had a great show! Damian, the original guitar player from The Third Bardo came to see our show and said he had never seen a show capture the essence of the late 60’s like our band did that night.
The live band actually recorded a very good all original album the very next weekend after our tour and it is a very good album. It is self titled “McFadden’s Parachute”. I will make this available very soon.
I just released a new McFadden’s Parachute album this past summer of 2010 called “Living In The 4th Dimension” and it features the sounds of my new Hammond Leslie 125 XL organ for more of a 1969 heavy sound on some songs. The album has 10 original songs and 2 covers. I cover Dave Davies “Creeping Jean” and Jacques Dutronc’s ‘Les Responsible” which I sing in French. It is getting quite of bit of air play in the US and Europe. I am also working on a new album McFadden’s Parachute this spring, as yet to be titled. And I am also recording and producing another album with my other studio two man band. Jeffery Woodruf and myself are known as “Omega Centauri” and we will be recording an album that will feature two drum kits on every song and the Hammond organ on every song, plus some heavy fuzz guitar. I hope to play out live as McFadden’s Parachute this year, but it all comes down to the avaliabilty of musicians and whether I can find the time to put that kind of project together. It is very demanding, especially with two full time jobs as a Civil Engineer and a Fine Artist and Photographer.
Do you have anything else to say about the band or yourself, that I didn’t ask?
Just that I am dedicated to producing music as best I can in a style of the late 60’s psychedelic garage sound using vintage instruments and techniques of recording and time travel so that people who dig the style can have more music to enjoy for now and the future. McFadden’s Parachute will be a band that releases 1960’s psychedelic music until the day I die. That I promise.
Thanks Klemen!
Peace!
– Klemen Breznikar
InterviewKlemen BreznikarMcFadden's Parachute