Nero Kane is back with a psychedelic folk masterpiece. ‘Tales of Faith and Lunacy’ is the second album by Italian songwriter after the 2018 release of ‘Love In A Dying World’ for the LA art collective American Primitive. The upcoming vinyl LP will be released via Nasoni Records at the end of October accompanied by CD (BloodRock Records) and tape (Anacortes Records).

“‘Tales of Faith and Lunacy’ is a journey through the loneliness and darkness of life.”

‘Tales of Faith and Lunacy’ is your upcoming record coming out on Nasoni Records in October. What’s the story behind it?

Nero Kane: ‘Tales of Faith and Lunacy’ is a journey through the loneliness and darkness of life. After my first record I started to write and collect songs that were less autobiographical and gave voice to characters always related to my personal feelings. All came out in a kind of religious atmosphere where faith, love and desire were connected in a spiritual and deeper level. The songs are about revelations and loneliness, and how we try to find something inside or outside of us to go on or, on the contrary, to lost ourselves in our inner lunacy. A force that guides us in our own lonely path. This force could be love for another person or love for any kind of God. This album talks about stories of lost souls in a condemned world, a sort of medieval and gothic American West where the characters are wandering without a past and without a future. Just souls in search of their final revelation. There is an evident connection with the European medieval age in the song called ‘Mechthild’, which is inspired by the visionary life of Mechthild Of Magdeburg, a female Christian medieval mystic, whose writings are quoted in the lyrics. This visionary background is also strictly connected to my music that continuously floats between the American bluesy desert sound and my European origins and culture. ‘Tales of Faith and Lunacy’ builds a sort of bridge between these two worlds. 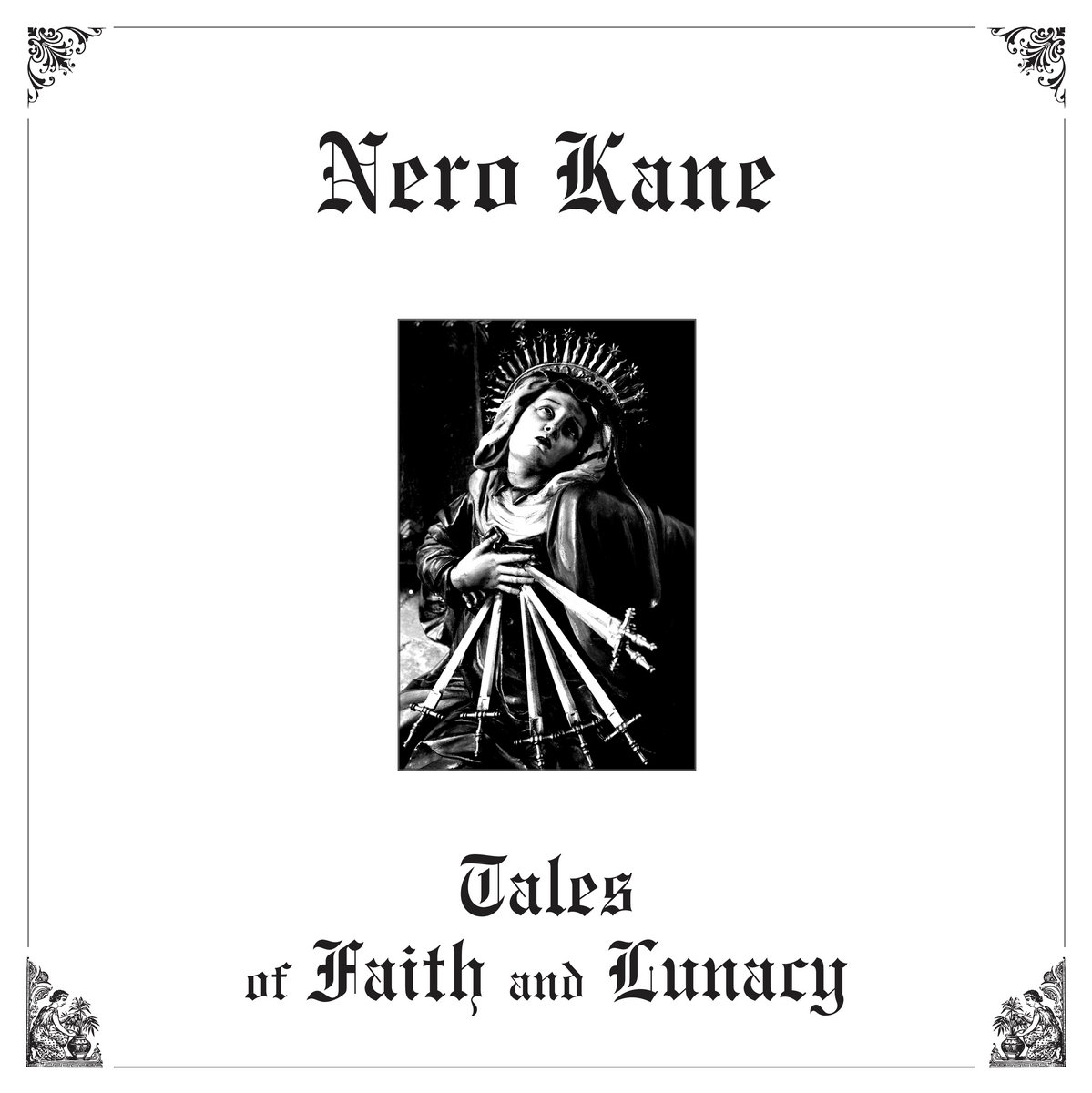 The sound is quite different from your previous record.

The dark atmosphere has always been an important part of my music even in my previous projects. Now that I’m running deeply into songwriting, in a folk and less rock type of sound, this side is becoming more and more evident. Writing ballads and growing up as a man, makes me investigate day by day deeper in my thoughts and visions which are more focused on the darkness of life. This aspect is the only one that really matters to me. As for the sound of the new record, we decided to work on the dark, hypnotic and psychedelic elements of my songs which are basically built in a mono riff / loop way. The lyrics and the chords always in minor have guided us naturally to this choice of arrangements and mood. Moreover, in the live acts my music is really oriented towards this way, even with the songs of the previous record ‘Love In A Dying World’. The difference between the two albums is that in the first one I worked more in a “pop” way, probably by remaining more connected to the desert landscapes that guided the songs.

How did collaboration with visual artist, performer and filmmaker Samantha Stella come about?

The collaboration with Samantha Stella started in 2015 when she shot some music videos for me. After that we became more and more connected as persons and souls, and we started to share everything in our artistic path. Soon we worked on a performance called ‘Hell23’ which was presented in an art gallery in Milan and at the Italian Cultural Institute in Los Angeles. During our trip through California I was working on the pre-production of ‘Love In A Dying World’ that already had this type of American desert vibes, so she decided to shot a film in the desert landscapes fully based on my upcoming album. Before and after the end of my recordings in Los Angeles she shot the entire film featuring ten videos / chapters as the ten songs of the record. When I had to set up the live set to promote it, I thought that Samantha was the person really more connected to my music, the one who really knew everything about that, so I asked her to join me on electric organ, piano and cymbal, to add a minimal background to my voice and guitar. Meanwhile, she presented the film in many Italian museums and art galleries, and sometimes we connected everything also with a live concert after the screening of the film. At the end we created a suggestive visual and audio project based on the album and we had a lot of satisfaction. We played our live concerts in many Italian and European venues including clubs, theaters and churches, we opened for great artists like Jozef Van Wissem, Marissa Nadler and Hugo Race, up to our last tour in UK just a few days before the pandemic. We continued to share our visions, and my music became also her music. I pushed Samantha to write her own lyrics and some of these became the lyrics of my new songs. ‘Tales of Faith and Lunacy’ is the result of this natural growing process. A new album, a new journey, a new chapter of our artistic collaboration and personal life. Together we shot also the new video of the first single that will be out before the release of the new album.

I made a pre-production in Milan that became the basic layer on which everything was created. At the end these pre-productions were so good that we decided to don’t re-record these parts but to strictly work on the arrangements of the songs. Many of my guitar parts are first takes, and so many of the vocals. So, when we went to the second recording studio (Outside Inside Studio, run by the Italian talented musician, producer and sound engineer Matt Bordin), we add everything that we thought was essential to create the mood of the album. Matt is the real mind behind the arrangements. I expressly asked him to work as an artistic producer and so he did. He quickly understood the mood of the songs and the sound I had in my mind, and the collaboration grew up in a prolific way. We also called Nicola Manzan, a multi-instrumental musician who worked with many important and underground Italian projects, who put his violin and archs in some songs. At the end everything was recorded by four people: me, Samantha, Matt and Nicola. The drones, organ and archs are melted to build a perfect suggestive background to my guitar and voice and to the voice of Samantha, which is a worthwhile new entry in my music. The atmosphere in studio was relaxing and we really enjoyed these days. The studio is located in a beautiful wood in the North of Italy and this silent nature gave us lots of good vibes which were also connected to our music.

What would you say are some of the similarities with ‘Love In A Dying World’, your previous release?

The similarities are the basic feelings that deeply run into my songs. Melancholy, sadness, loneliness. These topic arguments are the fundamentals of all of my songs. But it’s the vest around the songs that really changes. The way how I indicate these feelings, the shades that occur between all my compositions. Each shade is a different way to express and live these feelings. You can also trace other similarities in the way I’ve written the main riffs. My own style of writing is strictly based on few things and stripped down to the essential. I’m deeply in love with loops / mono riff / hypnotic songs. Less (sometimes) is more in my own vision of music. Since my previous record I’m really into this mood and type of songwriting. My way to write music basically didn’t change, what I’ve tried to do is to bring it to a further level.

I play a lot my guitar. I really have a deep connection with my instrument and I spend a lot of time with it. As it happens to many songwriters, most of my songs are born during my solo jams at home. Usually I start to play a riff that repetitively goes on and became a sort of mantra, then I attach a sentence that becomes the hook and then I go on with the entire lyrics. Usually I first write the music and then the lyrics, but often it happens that they come together. Many of the songs of ‘Tales of Faith and Lunacy’ were born in this natural and direct way. But obviously there isn’t a specific format or a general process. Often I start to write lyrics when I find a particular sentence that captivates my imagination. I take a lot of inspiration from books, films and paintings. I have a lot of influences. In general I’m really connected to the poetry and imaginary of old Italian poets like Giacomo Leopardi, Ugo Foscolo, Gabriele D’Annunzio and all these Romantic’s artists. I also like Russian and American literature: Fyodor Dostoevsky, Vladimir Nabokov, Edward Bunker, John Williams, Cormac McCarthy, Kent Haruf. About the paintings I really like the Pre-Rapahelite artists, or Caspar David Friedrich, Arnold Böcklinand Caravaggio just to name a few. If we talk about films I had a great influence by directors like Béla Tarr, Luchino Visconti, David Lynch and The Coen Brothers. Musically I listen to a lot of artists: Nico, Nick Cave, Michael Gira (solo or with Swans), The Velvet Underground, Johnny Cash, PJ Harvey, Neil Young, Iggy Pop, Suicide, Mark Lanegan, David Eugene Edwards (Wovenhand), and many bluesmen and songwriters like R.L. Burnside, Townes Van Zandt and Robbie Basho. Sometimes I listen also to more “recent artists”. In these days I’m listening to Jaye Jayle, The Underground Youth and Marissa Nadler.

No. At the moment I’m only working on my own project. In the past I used to have bands, but my career as musician led me day after day to work just with myself (and with Samantha) to be more independent and focused on my own direction. With a full band everything becomes more difficult, especially in these tough times for art and music in general. If you want to achieve good results, you have to work hard and dedicate all your life. And it is not easy to find out souls that have these same feelings and urgency. Samantha works also on her own artistic projects in the visual arts and performance, she is quite an eclectic person who loves to experiment the use of different artistic languages. In the past she collaborated a lot with contemporary dance and theaters, and with the fashion world. She actually runs her own weekly column with a very popular Italian art magazine where she interviews many international musicians about the nature of Art and Music.

Thanks to you for your interest in my project. Today everything seems to be so superficial and useless. Also music became useless to a lot of people, but for me it will be forever my life, even if sometimes everything seems to tell you to give up. At the end, “Faith is the word to remember.”