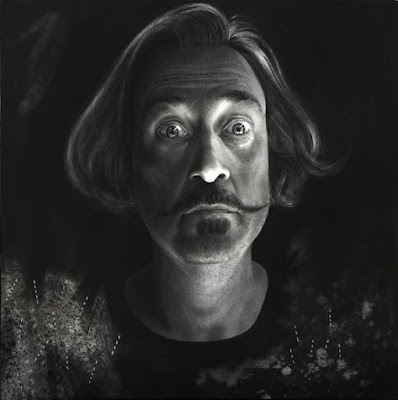 “Life’s a loop: you get up, eat, drink, work, go to bed, make love, get up…”
Stefan Brand released Don’t Call Me Dali, Darling! as Brandstifter on Chocolate Monk Records. It’s full of primitive loops, toy instruments and some early Thursday morning nudity. Don’t watch the third floor window! I said don’t. Don’t. Too late…
Stefan Brand: First of all: I’m an interdisciplinary artist and I call my sound work art music, as it’s related and in context with my conceptual art and everything else I’m doing. I’m running the DIY label Flux On Demand with 15 releases since 2014, mainly C-30 cassettes with analogue/handmade cover artwork in limited editions using stamps and hand lettering. My motto is “Make music sound like sound & make sound sound like music”. Brandstifter means fire starter and is also a play with words as a “stifter” is a founder, someone who is gifting, so it’s negative and positive at the same time. I love to play with ambiguity as nothing in this world is unequivocally clear.
The Chocolate Monk site calls Don’t Call Me Dali, Darling! your ‘infamous Thursday morning bedroom recordings’. Can you explain?
As I find the process as important as the product or important to understand the work itself, it was important for me to mention the circumstances of recording in my own liner notes. I’m happy Dylan (Nyoukis, label head of Chocolate Monk, jb) was quoting me in his promo text for Chocolate Monk. Since you asked I can tell the whole story for those who are interested.
What’s so special about your Thursday mornings?
My girlfriend leaves early on Thursday mornings so I developed a special structure for that day. After waking up I have a breakfast in bed while reading books, studying art zines, sketching and making concrete poetry notations in my notebook. At a special point I jump out of bed to grab some of my acoustic toys, keyboards and start performing standing in front of the window in my sleeping room. This is how I wrote, played and recorded “I Fry My Eye” (eye sounds same like “ei”, which is German for egg, I fry or “ei frei” means also “egg free/ without eggs”, which gives the short four lines several meanings) and the other tracks. Actually Dali Darling is from two Thursday sessions, one with my Casio SK1 with the sample effect and for the other one I used the Casio SA-21 Tonebank. Only “Boring Song” was recorded in my office room singing spontaneously to a telephone hold the line loop while making a phone call.
Is morning the best part of the day to create music?
I don’t think that morning is always best. It depends how and what you want to record and which condition you need.
… to get up and record, before everyday life kicks in? Why do you record in your bedroom?
Exactly! On Thursdays I use the mood before everyday life kicks in – undressed, not checking my mails, no office work or talk to other people before that. Next point: I’m a perfectionist. If I have too many options I won’t start because there are too many possibilities to decide from. This is why I started photography with Polaroids. I have some equipment in my band’s rehearsal room in Darmstadt and some in my studio at Walpodenakademie Mainz, but the small stuff is stored in a shelf in my bedroom. The battery fired keyboards are always waiting for me on the window seat and I don’t have nothing to set up, as I don’t use a mixer unit. Vox and keyboard are on the same track. As I don’t use headphones, either. I even can’t control what it sounds like – it either works or not.
Can you tell me how you made these recordings?
I used the digital Zoom recorder H1 that I bought for my first artist residency in India in 2011 and put it on my window seat. I started field-recording on audiotapes in the mid 1980s as a teenager. Now I have a big sound archive of C-60 and C-90 cassettes, never thrown anything away. Currently I picked up my old micro tape recorder to make crazy stuff for a new release. I have a lot of material, always looking for interesting platforms – physical copies preferred!
Also in the same announcement, there’s a line that I don’t understand: ‘made with an unplugged synthesiser’. You have to explain this to me.
My little keyboards has a build-in speakers. I also didn’t use a microphone for my Vox, so I was just playing and singing directly in the zoom’s microphone, which was also catching the sounds from the street outside. You can hear a police car passing with his siren going at the end of the last track “Vorbei” (“vorbei” means “over” and also the preposition of passing by at the same time).
You seem to have a fascination for banal things, or for everyday things that other people don’t notice. Where does this fascination come from?
Well there’s nature and there’s art which comes from artificial. Best art (and music) is related with everyday life because everybody knows and can understand it. I’m a conceptual artist but I don’t like most academic art. Best artists I know are self-made artists. This is why curators often put me in the context of the Fluxus movement, which was a big discovery for me after realizing Dada is occupied by the bourgeois. Fluxus started in 1962 in Wiesbaden which is the twin city of Mainz, where I have my “base camp”. I did performances for the Fluxus At 50 jubilee with one of the founders of the movement Benjamin Patterson. Ben died 2016 shortly after he joined me for his very last stage performance, which we released on vinyl.

Another one of your fascinations seems to be repetition, more specifically: loops. What fascinates you about loops? How do you make your loops?
On Don’t Call Me Dali, Darling! I used my Casio SK1. You can use for recording one, second through a built in microphone and replay it filtered through the keys. On my artist residency 2009 when I was living in New York at Flux Factory I founded the SK Orchestra together with Michael Durek from New Jersey. We started as a performance duo battling with sampled words on our SK’s in small clubs and galleries and in December there were more than a dozen people on stage of a theater at Times Square and after that playing drunk in the subway. Best is always a mix of trained musicians, dilettantes and some people even circuit bend them. Another concept with loops is my famous series rauschgiftengelloops (drug angel loops), a concertant sound installation that I’m improvising at churches, galleries, clubs and museums with vinyl players and records related to John Cage’s idea about coincidence. I also use a Music Man loop station for my series Vox Noise Loops and recently started a Loop-Duo with my “antibody” the sound poetry performer HuelsTrunk from Frankfurt. I’m fascinated by loops. Life’s a loop: you get up, eat, drink, work, go to bed, make love, get up… till you die. So it’s always the same but not exactly and this little variation makes it interesting. Dadaist Kurt Schwitters once said: “We are playing ‘till death comes for us”.
Your music seems to have some kind of ‘act before you think’ attitude, as if it’s made with a blank mind. Would you agree with that?
Yes, sometimes. I try to get in touch with my subconsciousness. This is why I love to improvise music and doing unexpected things during a performance and I love to interfere with the audience, too. 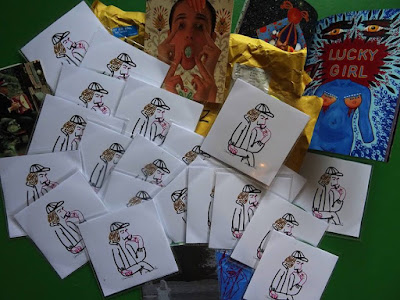 What does the title ‘Don’t Call Me Dali, Darling!’ mean? Is there a story behind that?
I grew my mustache in India, not thinking at all about the surrealistic painter from Spain… On my artist residency 2014 in Graz, Austria I was pissed by strangers calling me “Dali”. On my next visit in India 2015 I got a lot of compliments from men & women recognizing my “original” Rajasthani beard and I performed “Respectable Moustashees” giving fake mustaches to women, because I was told men are respected in India for wearing a beard. Now my mustache already became a trademark for “Mr. Brand’s brand”, so it was easy for Daniel “Mr. Intransferible” from Mexico to draw my portrait for the cover while selling my art zines at Zine Fest Berlin.
You’re also a performance artist. Do you think Don’t Call Me Dali, Darling! is a kind of performance, but without an audience?
Yes, but I hope people can’t see me performing and recording half naked in front of the window on 3rd floor. I even shot a video while performing music there. Guess after publishing this interview I will have a big audience clapping hands when I go to the window next Thursday. I also like to play and move in my comfy long shirt that I wear at night. I already performed at Adelina’s in Brookyln in this nightshirt. It’s giving you a certain presence turning an ordinary outfit into a costume if you put it out of its usual context. 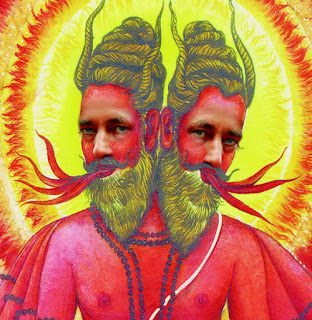 Don’t Call Me Dali, Darling! is the first album I heard from you. How did you get in contact with Chocolate Monk? Did you contact Dylan Nyoukis or did he contact you?
Well one thing leads to another. I released a lot of albums and solo compilations or with band projects since the late 1980s on cassette, vinyl, CD, online platforms and even on a 3,5” floppy disc. Recently I sent some tracks for a sampler that is going to be released on a stick in an urinal cake. Don’t Call Me Dali, Darling! is my second album on CM as Dylan already released the album Wot It Is Not, a best of album from my New York project Wizards of Oi with Aaron Moore last fall. Aaron is a brilliant British musician with a great sense of humor. We played a lot of sessions and shows in New York and Germany together. As I’m the head of the non for profit art organisation Walpodenakademie and curating experimental music concerts at our gallery where I first saw releases from the label with the funny name from Brighton. Then I ordered some of their releases and I loved the mix of genuineness, humor, avantgarde, DIY & antipop. Aaron and me were looking for a label to release our album and Aaron was already in touch with Dylan. You should get yourself a copy! Just checked: it’s sold out from the source, but I still have a very few…