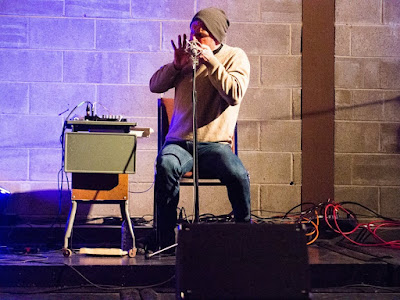 “The simplicity is what makes it so complex”
Chik White is a Canadian ex-punk who started playing a jaw harp in 2010, released on several tape releases, and appeared on the compilation Stranger Calls To Lands.
I bought your Stranger Calls To Lands LP earlier this year, which was my introduction to your music. Why is this LP on Feeding Tube a compilation (instead of new material)? Who made the selection: you or the label?
One of the label bosses, Byron Coley, is a writer at The Wire. He’d heard and reviewed a number of my tapes over the years. So yeah, it was his idea to do a compilation of those releases. Many of the tapes had come out in very limited quantities, so he thought the compilation would be a good way to make a more significant document of this work and reach a wider audience.
Feeding Tube has done a lot of releases in this style, and they do a good job of it, true archivists of weird music and arts. As for the selections, I let Byron put it together. I was really interested in getting an objective view of my material. I ended up giving him 100+ tracks to choose from (the shortlist). He spent a week going crazy listening to it all. Apparently, my music caused some mental anguish for his dog.
Material on the compilation is from 2010 to 2017…
The record covers 2010-17 because that’s how long I have been recording music for this project. The selections are drawn from seven cassettes released in that period; a couple unreleased tracks are also included.
Your instrument is the jaw harp. How did you get into playing the jaw harp?
I played in bands of various sorts for many years. But in 2010, I moved out to the country, which made it more difficult to stay connected with bandmates, jam spots, venues, and such. So I drifted from that scene. The year I made that move, someone gave me a toy jaw harp for a birthday present, and I just started fooling around with it. It was a surprisingly captivating little instrument, and it fit nicely with some of my newer interests, like hiking and mediation. So I started doing some research. I found a few communities of jaw harp enthusiasts, mostly from Europe, and a number of artisan harp builders as well. I ordered a few well made harps, all of which I still play, and just kept going with it. A lot of my earliest work with the instrument involved playing for long stretches of time while wandering the coast near my home.
I don’t know many jaw harp players. Is there a tradition of jaw harp playing that influenced you?
It’s an incredibly old instrument, dating back to at least 300 BCE. Because of its simplicity, the jaw harp has found its way into most cultures around the world. It’s part of shamanistic rituals in Siberia, bluegrass in the American Ozarks, traditional music in Germany, and on and on. There’s even a rusty old jaw harp at the Acadian Museum near the village where I now live (I played it when no one was looking).
Do you think there’s a link to folk music?
Yeah, I initially thought of it as a folk instrument. I’m a big fan of the Lomax collection and also the work of Helen Creighton, who was a folk musicologist from Nova Scotia. You’d sometimes hear jaw harp on those recordings and other archives from the period. I was fascinated by the sound and simple utility of the instrument. So I guess that was my starting point. As for people or albums that influenced me along the way, there aren’t too many out there. Perhaps one of the first albums I heard was Daniel Higgs’s Magic Alphabet. Later I heard Makigami Koichi and Anton Bruhin’s Electric Ell, which is a bit more experimental. I listened to the odd traditional compilation as well. However, I’m probably more influenced by music that has nothing to do with jaw harp: noise, free jazz, vocal music, etc.
Often the jaw harp doesn’t sound like a jaw harp when you play it. Are you looking for new ways to play this instrument?
In 2016 I really started to explore new ways to play and amplify the jaw harp. It’s an instrument that sounds incredibly vibrant in my skull while I’m playing it. But I had struggled to capture that sound on a recording. So I got into micing the harp from inside my mouth, but that was difficult. Eventually I settled on a throat mic, which opened up an entirely new world of sound for me, not just from the harp but also from my voice. I started to hear noises from my body that were totally foreign to my ear. I documented some of this exploration on my Malform cassette. So yeah, from there I just went deeper into vocal experiments, both live and on recordings. 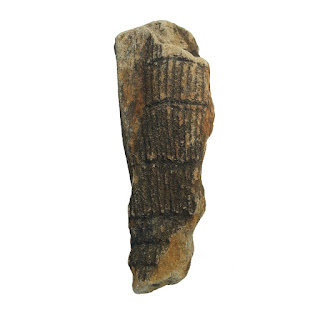 Do you use any preparation before playing it?
I do use preparations: magnets, chains, clips, thimbles, etc.

Is there a link to sound poetry and sound art, especially in your amplified playing?
Yes, I consider what I do a form of sound poetry. The noises I make are more lyrical than musical. When I play, it’s as if I’m talking in some unknown language. At least, that’s how I try to conceptualize what I’m doing. I think about narrative, tension, comedy, nonsense, etc. I’m also interested in exploring vocal possibilities that go well beyond music: choking, gagging, and other bodily sounds.
Over the years I’ve become enthralled with sound poets and vocalists like Paul Dutton, BP Nicol, Bill Bissett, Masonna, Maja Ratjke, Henri Chopin, and many more. I’m also really interested in the sound poetry of the Dada period (which I can only read). It just seems so audacious for the time. I bought an Elsa von Freytag-Loringhoven collection in 2016 that really kicked me off in the sound poetry direction. “The Elsa Stranger To Time” track on Malform is about her.

How do you amplify the jaw harp?
For my live set-up and most of my current recordings I use two mics, a contact on my throat and an external condenser. The contact mic brings a lot of dynamics to the mix: an incredible array of vocal and harp sounds to explore. It also provides deep bass frequencies. The condenser picks up another array of sounds, some of which are very minute, like the sound of my finger brushing my cheek as I play or the sound of my lip peeling off the metal frame of the harp. Really intimate sounds. Besides balancing those two mics in various ways, I don’t use any effects.
Do you sometimes feel like the jaw harp is an instrument with limited possibilities? And do you see it as a challenge to get as much as possible out of it?
That’s what I like about it. Again, it reminds me of meditation. The simplicity is what makes it so complex.
Are your recordings improvisations or compositions?
It varies, I suppose. I never truly play a composition, but I sometimes set certain parameters for a piece. I may explore a certain technique or preparation on a certain harp. I’ve also used visual scores and poems to guide pieces. That said, I like to sit down, get a sense of my situation, and just play.
Your live shows sometimes remind me of Lucas Abela. I guess it has to do with playing until you bleed. Why do you do that?
I do often bleed during live shows. It’s not something I plan to do; I’m actually a bit embarrassed when it happens. But I get into a state while playing where I lose control of what is happening. I’ll just open my eyes at the end of a long piece, and there will be blood everywhere. 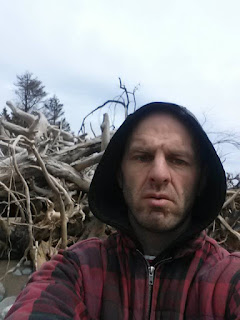 Does it become some kind of Actionist performance this way?
Sure, I guess there’s an Actionist element. I mean, I’m choking myself with the throat mic, hyperventilating, and hammering at a razor sharp blade that I’m holding in my mouth. It’s very intense. And it needs to be. The shows can be surprisingly dark and visceral. I try to go deep when I play, and sometime it’s not pretty.
https://darcyspidle.com/
https://chikwhite.bandcamp.com/
– Joeri Bruyninckx
© Copyright http://www.psychedelicbabymag.com/2018
Chik WhiteInterviewJoeri Bruyninckx