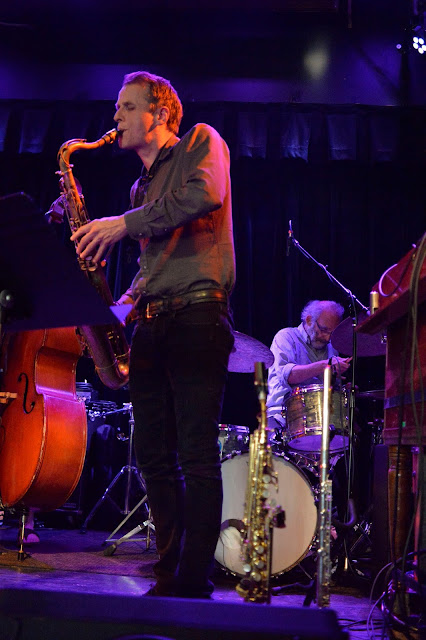 The 2017 Royal Room Psychedelic Festival Day One: 1967
Seattle, Thursday 6 July
John Coltrane Expression
For 2017, the Royal Room Psychedelic Festival focused on themes for each of its four days over the weekend of Thursday-Sunday July 6-9. The theme for Day One was the year 1967, the first set John Coltrane’s final album Expression. The group who performed what was perhaps Coltrane’s most adventurous studio recording consisted of players who have set the standard for creative jazz in the Northwest through painfully hard work over many years: Neil Welch – saxophones, flutes and small percussion; Dick Valentine – saxophones and flutes; Carol Levin – harp; Ryan Kotler – bass; and Gregg Keplinger – drums and small percussion.
Shakers began the set, accompanied by harp. The free-form rhythm built gradually, exploding and crescendoing, then declined in intensity. Kotler took a low-key bass solo with Valentine playing bamboo flute, Keplinger playing shakers then switching to brushes. Welch moved from tenor saxophone to flute, and Valentine, having switched to piccolo, played free-form against Welch’s seemingly layering melodies. Keplinger playing brushes, he underscored Welch and Valentine while the harp and rhythm section built and maintained thunderous intensity – Levin playing her harp with a bow, the intensity of the two flutes growing and changing like two butterflies chasing each other through a wild grassland.
The natural musical currents flowed then erupted with the classic “Living Space.” Welch playing soprano saxophone, the free-form rhythm section coursed through transitions with geyser-like waves. Valentine soloed against Welch also on soprano saxophone, then joining him in the melody, both saxophone players came together accented by the harp falling gracefully, ending the tune with shakers. 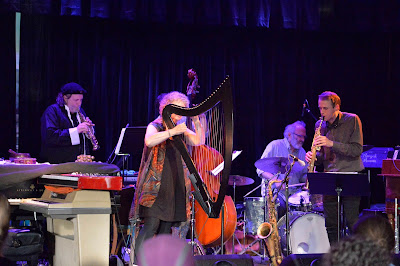 The final piece of music began with a bass arco solo and cymbal wash, Welch coming in on tenor saxophone, Valentine playing bamboo flute. Welch wailed against Keplinger who was playing time in broken phrases, and the conversation built in intensity. As tension released gradually and they brought their set to a close, the tune faded and this group of iconic musicians showed once again that West Coast free-form jazz is on par with the finest collectives in the world. 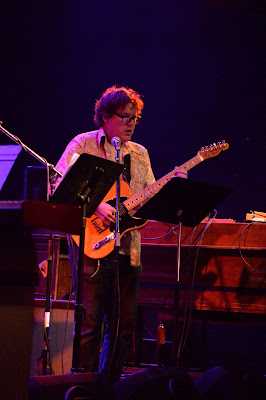 The Mothers of Invention Absolutely Free
For the second set of the evening, the group that performed Absolutely Free by The Mothers of Invention in its entirety also consisted of players who are stalwarts of the Northwest creative music scene: Simon Henneman – guitar, vocals; Neil Welch – saxophone, vocals; John Seman – bass, vocals; Mark Ostrowski – drums; Matt McCluskey – keyboards; and Allison Eltrich, Jared Nelson and Jody McKane – guest vocals. Whereas the group that performed Expression improvised to honor the spirit of Coltrane’s work, Absolutely Free was meticulously transcribed by Henneman and Seman. The result in both instances were performances at very high levels of musicianship and musicality.
From the opening lyrics of “Plastic People,” the music and time came into focus, and the President of the United States was introduced. The band sang the chorus before they moved completely outside of time and then haphazardly back in again and again before setting into a steady musical interlude.
Allison Eltrich joined in as vocalist to open “The Duke of Prunes,” accompanied by Welch playing flute. The rhythm section started into a steady interlude with Welch soloing, comprising “Amnesia Vivace.” Segueing into each other, “The Duke of Prunes” was reprised, and “Calling All Vegetables” was introduced, Welch playing soprano saxophone with McCluskey’s harpsichord to underscore the vocals. Eltrich sang the lyrics accompanied by Henneman and Seman for the chorus, moving into a highly orchestrated musical interlude. The band cut loose for “Invocation & Ritual Dance of the Young Pumpkin,” with Henneman fiercely taking an extended solo, Welch comping on soprano saxophone. The music came back in with Eltrich singing “Soft Cell Conclusion,” then the band drew an end to the first side of the album.
Henneman introduced side two, Seman reciting, “One, two, buckle my shoe,” to lead into “America Drinks.” Henneman sang the lyrics over Ostrowski’s jazz hi hats, the band shifting into uptempo rhythm with Welch soloing. Leading into “Status Back Baby,” Henneman soloed dirty comped by Welch on soprano saxophone while the rhythm section was in sustained chaos.
Seman singing the lyrics comped by piano and saxophone, the band seamlessly moved into “Uncle Bernie’s Farm.” Henneman ripping dirty riffs between choruses, they suddenly switched into “Son of Suzie Creamcheese” at breakneck speed without warning. 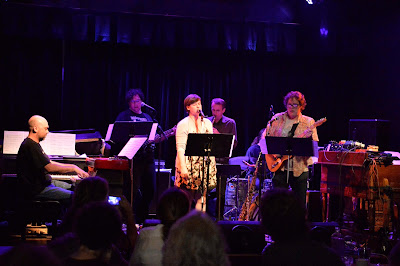 The time stopped, and then began the funky blues of “Brown Shoes Don’t Make it.” Out and then back into time, Welch and McCluskey traded solos on saxophone and piano, respectively, then the rhythm exploded into chaos to lead into verse. Time stopped as a story was told about a teenage queen discovering rock and roll, the chorus about the certainty of engaging in nastiness sang against a broken waltz. The time stopped again as the girl asked, “What would you do, Daddy?” His answer, sung over Ostrowski’s jazz hats, was to smother his daughter in chocolate syrup and boogie ‘till the cows come home. The time kicked in, Welch’s fiery wailing comping with Henneman who soloed with equal abandon. The rhythm turned chaotic and climaxed, and the band sang the chorus of “America Drinks and Goes Home,” giving last call to bring the album to an end.
All photos © Jack Gold-Molina
– Jack Gold-Molina
© Copyright http://www.psychedelicbabymag.com/2017
Frank ZappaJack Gold-MolinaJohn ColtraneLive ReportThe 2017 Royal Room Psychedelic Festival