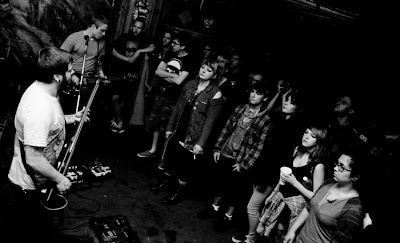 Taking as much from metal and straight up
noise as they do from punk and good old fashioned psych rock Ex Nuns are just
about as good as it gets these days.
Hell any day really!  The rhythm
section on th Dead of Zero single is destructive, seamlessly combining all the
best parts of hard rock and heavy and metal with the furious fills and non-stop
attack of the Ex Nuns punk rock roots.
And by the way it is so nice to be able to hear a bass track in a song
that words can hardly describe my elation!
Not only is the guitar ridiculously catchy with some sweet tones, but
the bass actually sits high enough in the mix that it’s audible for once.  Ex Nuns are a band that aren’t ashamed to
show off every aspect of their sound, even the intentionally buried vocals aren’t
a garbled mess or lost in the drums.
They’re strutting their stuff with their debut single Dead of Zero and I
don’t blame them; this is some seriously killer punk rock here.  There’s metal, there’s noise, there’s some
gnarly punk and garage, there’s psych and even some of that good old fashioned
rock’n’roll thrown in there for good measure!
And it’s all intertwined so skillfully it will make your head spin.  Simply put this is good music.  If the Dead of Zero single is any indicator
as to what a full-length album from Ex Nuns is going to be like I not only hope
they somehow release an album by the end of this week, but that the band lives
long and prospers because I am already frothing at the mouth for an album and I
only picked up the single a few weeks ago!
Listen
while you read at:
http://25diamondslabel.bandcamp.com/album/dead-of-zero-b-w-crash-meditation-7 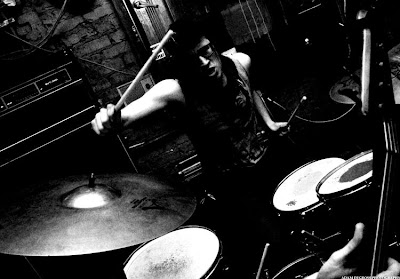 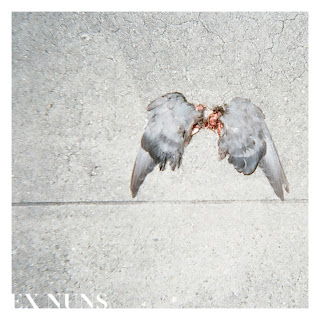 You
played did an in-studio performance for Radio K on Record Store Day back in
April this year (2013), you debuted a couple of new songs.  It was all taped and archived at
http://www.radiok.org/instudios/exnuns/.
Did you enjoy that?  Was it nerve
wracking playing in front of camera men or have you done stuff like that in the
past?  How many new songs did you play
then?  Had those songs been in your live
repertoire for a while or were they relatively new at that point?
Jeffrey:
Radio K are some of the nicest and most professional people I have met
at any musical institution.  For me
personally it was a little nerve wracking considering that when we went on air
the final mix in my headphones was completely fucked.  There were camera people in my way and I
could not make eye contact with Joram but our meticulous practice schedule paid
off and I feel like we nailed it.  It was
a very rewarding experience because none of us had done an in-studio and I
really hope we get to do it again.  We
played three new songs.  We’re not
putting all those songs on our full-length due to the context of how we are
going to lay out the album song-wise.
The full-length is going to have a very post-hardcore tone and not all
of those songs are going to be appropriate.
However, we are considering doing a split cassette tape for Eskimo
Brother if any bands are willing.
Joram:
It was a barrel o’ fun.  Everyone
at Radio K was super cool and laid back.
They made it feel almost like we were just practicing.  But they added a bunch of cameras.
Are
there any plans for any follow up releases or a full-length at this point?  Dead of Zero was killer and left me longing
for an album!
Ex Nuns:
Yes, we are doing a full-length on our label 25 Diamonds.  No name yet but we are literally working
almost every weekday night on it and I couldn’t be more stoked to put this baby
out and then hit the road.
Where’s the best place for our U.S. readers to purchase your music?  With the recent international postage hikes
where’s the best place for international readers to get stuff from?
Ian:
Here’s a current list we have of where to pick up our record:
25 Diamonds Records
(http://www.25diamonds.com/).
If you live in Chicago, you can pick up our
7″ here at Permanent Records Chicago.
If you live in Brooklyn, you can pick up our
7″ here Insound.
If you live in Minneapolis, you can pick up
our 7” at Electric Fetus or Extreme Noise.
Europe: http://www.perkoro.com/19069 or
http://www.hhv.de/shop/en/item/ex-nuns-dead-zero-324194.
Japan: http://www.watersliderecords.com.
And you can also order from Ebullition
Distribution http://www.ebullition.com
or Revolver Distribution
http://www.midheaven.com.
What
do you have planned as far as touring goes for the rest of the year?
Ex Nuns:
We are going to be playing various local and out of town gigs.  We are way too focused on writing and
financing the production of our full-length, I guess you could say that’s where
all our energy is going as of right now.
Do
you have any funny or interesting stories from live performances that you’d
like to share with our readers?
Jeffrey:
The most laughable story I have is when we played a show at Hell’s
Kitchen Underground.  The sound engineer
kept telling us to turn down and Ian was pretending to turn down because he
didn’t want to compromise the tonality of his amplifier.  In between each song the engineer kept
telling us to turn “way the fuck down”.
So before our last song, he turned on the house lights and said we could
either turn down or get off of the stage.
So Ian just threw his guitar down and walked off the stage.  Then the sound engineer came up to us and
told us we sound like shit and the manager of the place came up to us and was
asking us why we did what we did.  I
didn’t really talk to anybody and it was super awkward.  Also, if you want to load out of Hell’s
Kitchen you have to move all of your gear up through an elevator on to a
parking garage.  It takes a half-an-hour
to forty-five minutes to load up all your stuff while the staff is on our
ass.  It was laughable because we had
played there twice before that with all of the same gear and had no issues with
the sound engineer. 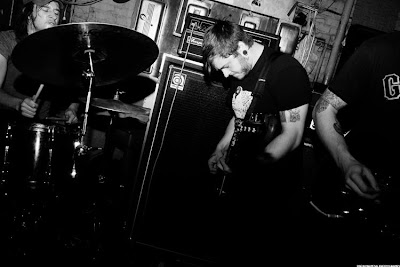 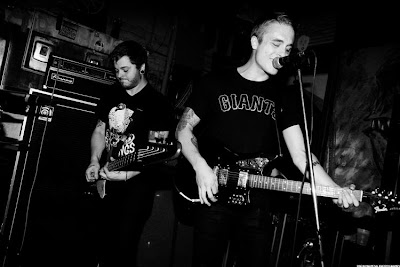 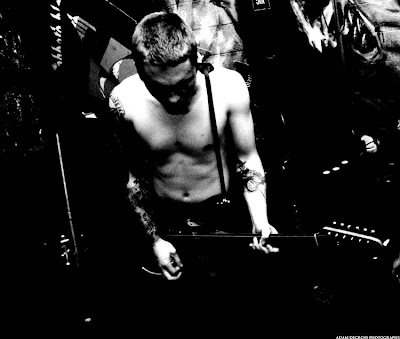 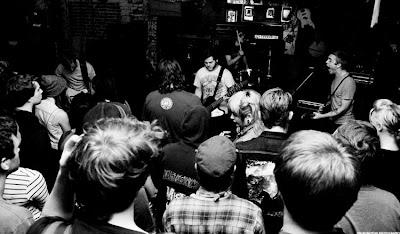